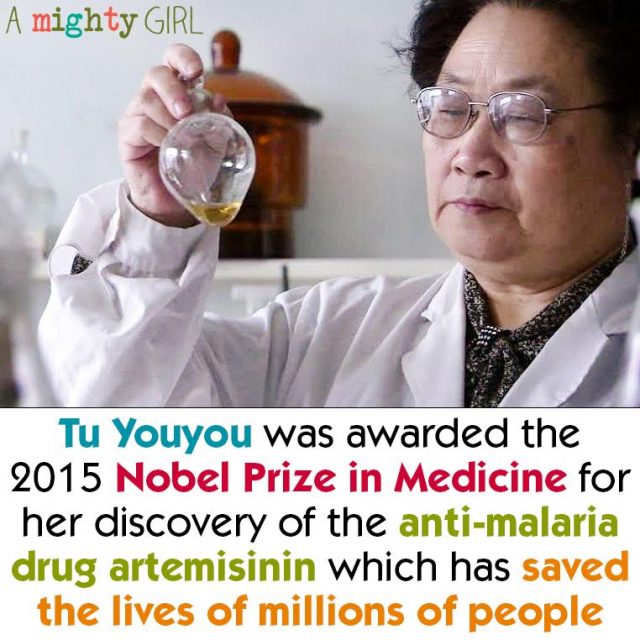 Happy 88th birthday to Tu Youyou, the Chinese chemist who won the 2015 Nobel Prize in Medicine for her trailblazing research on malaria! Tu’s painstaking work examined over 2,000 traditional Chinese remedies which resulted in her discovery of Qinghaosu or artemisinin, an extract of sweet wormwood that dramatically inhibits the growth of the parasite that causes malaria. Her discovery has saved the lives of millions of people around the world, especially those in developing countries.

Tu’s research began in 1969, in the midst of China’s Cultural Revolution. It was a dangerous time to be a scientist in China, but malaria was becoming resistant to previously effective treatments like chloroquine and infections were becoming a leading cause of death in China’s southern provinces. Mao Zedong set up a secret research station, Project 523, to focus on malaria research and appointed Tu as its head. She decided to look to traditional medicines and folk remedies to search for leads for her research.

She told the New Scientist that she hit upon success after rereading one particular recipe, written more than 1,600 years ago in a text titled “Emergency Prescriptions Kept Up One’s Sleeve.” It recommended soaking Qinghao or sweet wormwood in water and drinking the juice. Tu extracted wormwood using modern methods and the extract, Qinghaosu or artemisinin, showed excellent results in subsequent tests. Tu herself was the first human test subject: “As head of this research group, I had the responsibility,” she asserted.

The results of Project 523 were published anonymously in 1977, and artemisinin quickly became a critical tool in the treatment of malaria, especially in Asia, where sweet wormwood is plentiful. Since it was relatively easy to process and cheap to produce, it was accessible even in poor areas of the world, meaning that millions of people who would previously have gone untreated survived their bouts with this endemic disease. Tu hopes that her example will inspire other scientists to explore disease treatment possibilities derived from traditional remedies: “It is my dream that Chinese medicine will help us conquer life-threatening diseases worldwide and that people across the globe will enjoy its benefits for health promotion.”

Reproduced from A Mighty Girl