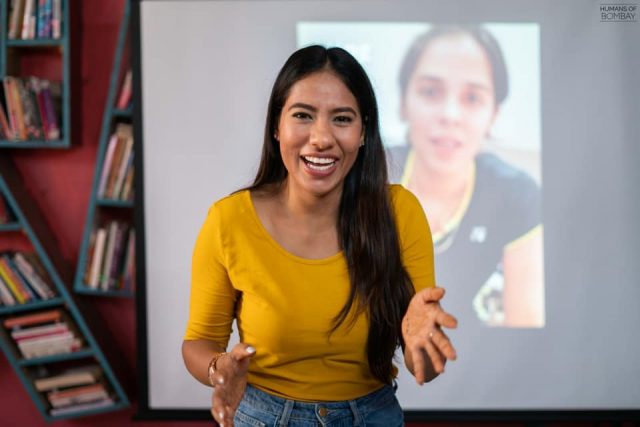 Trigger Warning: Contains details of sexual violence.
“I was 9 when I met Maa for the first time–one day, she just showed up and said, ‘I’m taking you home.’ Overnight, my life changed–I moved from Masi’s place in Kolkata to Mumbai with Maa and my stepdad.
Maa barely spoke to me; she’d be out all evening. I’d ask her, ‘Why didn’t you come to meet me for so many years?’ but she had no answer. Rarely, she’d talk to me about her early life–‘I was your age when I first came to this city…my uncle sold me to the red light area…’ but I was too young to understand.
2 months later, she sent me to a shelter home–for 2 years she never came to meet me, not once. But there, I started schooling and was motivated to study and be independent.
But just as I was adjusting, Maa reappeared; this time, with a promise of a ‘happy family.’ She even introduced me to my sister who was living in another shelter home–I was shocked!
But at home, nothing had changed–stepdad and Maa fought more; sometimes he’d hit her. Then, Maa would blame me, ‘you’ve brought me misfortune.’ I’d just cry.
One night, Maa went to work as usual, but never came back. I panicked–however she was, she was the only family I had. My stepdad casually said–‘she’s dead.’ I was devastated; I asked around but nobody knew how or why.
Thereafter, stepdad started touching me inappropriately. When I resisted, he said, ‘If you don’t do what I say, I’ll take your sister instead.’ Terrified, I gave in. For 4 years, he raped me every night. I even got pregnant once; I was 15. But stepdad gave me medicines to abort the child and threatened me to never talk about it.
At 16, when I couldn’t take it anymore, I mustered the courage and ran to the police station. But they refused to file a complaint because I was under 18. I saw no choice but to run away– it was the hardest decision because I was leaving my sister behind.
With the help of a friend, I found out about Kranti, a shelter home that helps girls from Mumbai’s red-light areas. They offered me the home I craved–I resumed school, made new friends. Still, I’d have nightmares of stepdad hitting me; I’d wake up crying. Therapy helped ease the pain.
But the thought that my sister was there bothered me–so I made a plan to rescue her. I succeeded and brought her to Kranti with me.
Finally, there were no speedbumps. I started living life– I even learned Zumba. It made me love my body again; it helped me heal. So I gave it my all and became a licensed instructor. I then started reading about women achievers like Saina Nehwal who began with humble roots and made it.
It’s been 4 years since–I’ve passed my 12th and launched my own Zumba classes; I make about 20,000 Rs a month! I’ve forgiven everyone who wronged me–it was the only way to let go and look forward…because life is still beautiful and I still have miles to go.”