In the past few days,  Bangladeshi women started sharing  their stories of sexual abuse under the #MeToo campaign:

Maksuda Akhter Prioty is an Irish-Bangladeshi pilot and model. She is currently living in Ireland and is the former Ms. Ireland. She is not only a model and a pilot, but is also an actress, screenwriter and wears many other hats. Recently, she took to Facebook to share her experience of assault before 3 years. Dhaka Tribune reported:

“Maksuda Akhter Prioty, a media personality who currently works as a commercial pilot in Ireland, released a number of Facebook posts and a video accusing Rongdhanu Group owner and Chairman Rafiqul Islam – also the chairman of Kayetpara Union Parishad in Rupganj, Narayanganj – of sexually assaulting her, raping her digitally (with fingers), and of threatening and intimidating her afterwards.”

Prioty has shared that she has been threatened after she spoke up about her experience. She has also expressed that she needed time to recover from the trauma that she experienced after being assaulted, in order to be able to speak up. On Facebook, she also responded to the claim that her allegation that it is a political conspiracy. Prioty has clearly stated that this is her battle against what Rafiqul did to her, and that it is not influenced by any political agenda. 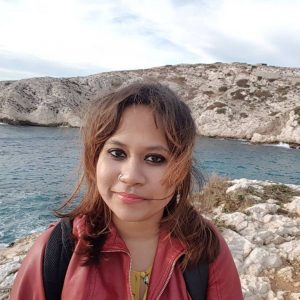 Shucheesmita Simonti, who is currently studying in the Netherlands, and editor of the Women Chapter English, posted on October 30 on her Facebook timeline:

So here is my #MeToo,
This guy, P.S., is a well-known face in Bangladeshi Media. I can see that I have about 70 friends in mutual with him. 11 years ago, he sexually harassed me. I was only 16 years old at that time…… He was close to my family and harrassed me on several occasions by touching me inappropriately……….I was completely devastated during my high school years because of him. I have lived with this pain for decades , and it has left a permanent scar in my heart. I hope families will be able to provide a safe space for their children so that they can share if they are abused.
I hate you P.S.! And I will never ever forgive you!

Shucheesmita later chose to reveal the full name of the abuser, Pranab Saha, and sent a complaint to his workplace.

After some who are supporting Pranab Saha posted on social media that she is doing it for asylum, she replied through Facebook:

I can challenge anyone who is saying I wrote my #metoo post because I applied for political asylum and I needed a cause. Prove that I did it. Show where and when did I apply. You are only making a fool out of yourself by using a made up story to save Pranab Saha.

Asmaul Husna who is currently residing in Bangladesh, posted about her experience on 7th of November through Facebook and posted the photo of the man who abused her: She is working at Centre for Policy Dialogue (CPD), a South Asian Think Tank. She shared that she was abused by Jamil Ahmed, who is a media personality, in 2013 and it took her time to recover from the trauma. 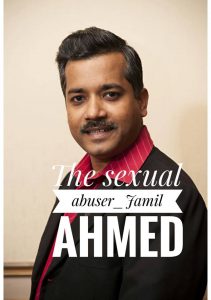 “#metoo
#stop_sexual_abuse
It was in 2013. I was a fourth-year undergraduate student. In Facebook, I was having a normal conversation with a person, whom I met twice earlier at BYLC training and Jatri Institute, from the media. We planned to meet a day, at Bangladesh Shilpakala Academy, for a casual adda in the evening. After finishing reading from British Council library, I went to meet this person.

We ordered coffee and had a good discussion about books and all that. Then, I decided to go home around 7pm. While we were walking to go outside (towards the gate which is near to Motsyo Bhaban), he was telling me that, “You know, I am almost the age of your father and we can be good friends still. Isn’t it?” While he was saying this, he kept his hands over my left shoulder. I was silent and thinking of it, perhaps, a friendly gesture. Then, he was telling me let’s have a walk around the adjacent road of Shilpokala which is on the side of Dudok building. (I didn’t know that road used to be almost empty and dark at that time.) I said yes, we can walk for ten minutes then I will go home.

While walking on the road, he stopped under a tree where it was darker. The road was totally empty. And, the poor me still couldn’t sense something wrong is going to happen to me. He put his lip gel and offered me to put it. I said no, as I don’t use other people’s lip gel. Within a blink of the eye, this guy held me tightly and started to kiss on my lips and was touching my body inappropriately. I was so shocked, afraid and lost. I hurriedly pushed him and ran towards Motsyo Bhaban, crossed the road and took a rickshaw.

This traumatic incident hurt me so badly that for the whole night I cried and couldn’t sleep. I was afraid to go outside, I was afraid to meet new people. It took years to recover this trauma and fear. To be honest, the trauma is not recovered yet.

I wish I was more courageous at that point of my life to file a case against this criminal abuser.

I am a strong woman now that’s why could write about my trauma and the injustice happened with me. I am stronger now because I want a sexual harassment-free world for my two nieces’, fellow women and the human being.

The name of this inhuman is Jamil Ahmed, a news presenter, tv program presenter and founder of Jatri. I want this sexual abuser must get punished.

N.B. The empty-headed and brainless inhuman, please start my character assassination and expose your lameness and inner beast.”

The Me Too movement (or #MeToo movement), with many local and international alternatives, is a movement against sexual harassment and sexual assault.#MeToo spread virally in October 2017 as a hashtag used on social media in an attempt to demonstrate the widespread prevalence of sexual assault and harassment, especially in the workplace.It followed soon after the sexual misconduct allegations against Harvey Weinstein. Tarana Burke, an American social activist and community organizer, began using the phrase “Me Too” as early as 2006, and the phrase was later popularized by American actress Alyssa Milano, on Twitter in 2017.(Source: Wikipedia)