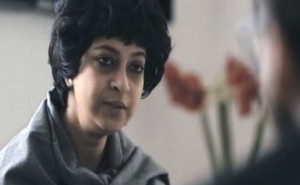 Monideepa Banerjie : It may have been mere coincidence. But two things happened on March 24 this year. Nirbashito got the national award for best Bengali film and Supreme Court scrapped Section 66A of the IT Act that made online posts a potential crime.

For Nirbashito’s director-actor Churni Ganguly, the coincidence was absolution. The film is about freedom of speech. Fictional but based on a slice of the life of Taslima Nasreen, the Bangladeshi writer exiled by her country. Nirbashito means banished. The director-actor will receive the award on Sunday.

The protagonist in Nirbashito has no name, but the resemblance to Taslima Nasrin is unmistakable – cropped hair, clipped speech and no beating about the bush with words. Words that got her thrown out of her own country And Kolkata. Words the actor-director believes everyone has a right to think and speak, certainly every woman.

And the protagonist is a writer who says, “You will not let a writer think, write or live.”

The absence of the protagonist’s name is by design. “I think not having a name actually shows the woman… every woman. So I would not want the woman to be conditioned by a name, by any social or political structure. I just wanted her to be a woman,” says Churni Ganguly.

Taslima Nasrin, however, has other ideas. After being banished from Bangladesh in 1994 and Kolkata in 2007, she now lives in Delhi on an annually renewable resident’s permit. She loved the film’s theme – free speech. “If I were a director, I would have given the protagonist a name but I believe in director’s right of not giving a name. I do not think it is an all-women’s story, it is a unique story because all women do not protest against injustices and inequalities and all women are not forced to go into exile,” she says.

The concept of exile is the film’s biggest strength, say film scholars. Exile – a part of India’s mythology, history and its present, from Lord Ram to Salman Rushdie to Maqbool Fida Husain. “From a first time director, this kind of juxtaposition of the melancholy of isolation… is balanced by the comedy that is enacted because she cannot come back, there is a cat that is left behind in a hurry and she wants the cat… So the cat is such a farce and such a hilarious part of the film,” says Ratnottama Sengupta, a veteran film critic and jurist.

The cat: Taslima’s is called Minu. In the film she is Baghini and she is not just comic relief. “The cat mirrors the homelessness of the mother, the cat’s yearning for the mother all the way in a distant land also mirrors the author’s yearning for her motherland, her language. All that is said through the cat,” says Churni Ganguly.

The film has been critically acclaimed at festivals in Mumbai and Delhi but the producers don’t have a release date yet. Worried about a controversy, particularly in Kolkata? Taslima is. “It depends on Mamata Banerjee, she doesn’t allow me to enter Kolkata and she banned the mega serial that I wrote for TV. So if she wants she can let people in West Bengal to watch the film, ‘Nirbashito’ and if she doesn’t want then nobody will be allowed to watch the film,” says the writer.

But those who have seen the film say there is no room for controversy. “It is a beautiful film and a beautiful cinematic effort. I don’t see any reason why anyone needs to agitate,” says Ratnottama Sengupta.