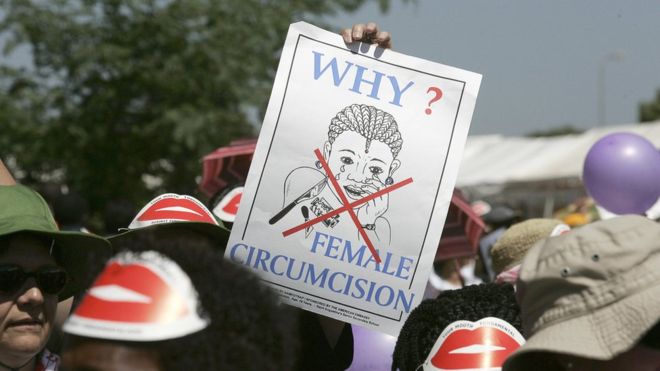 he father of a 10-year-old girl who died after undergoing female genital mutilation (FGM) in Somalia has defended the practice.

Dahir Nur’s daughter died of blood loss on 17 July, two days after being taken to a traditional circumciser.

But he told Voice of America (VOA) “people in the area are content” with FGMeven considering the dangers, adding it is the country’s “culture”.

According to Unicef, 98% of girls and women in Somalia have undergone FGM.

This is despite Somalia’s constitution prohibiting – although not outlawing – the practice, which involves the partial or total removal of the female external genitalia or other injury to the female genital organs for non-medical reasons and can cause profound health problems.

Dr Abdirahman Omar Hassan, director of Hanano hospital in the city of Dhusamareb, told VoA he had never seen “anyone who was mutilated like that in my life”.

Dr Hassan, who was on the team who tried to save the girl, also revealed she had caught tetanus, most likely from the unsterilised equipment used during the original procedure.

But Mr Nur said he did not want to pursue charges, and held no one to blame for his daughter’s death.

Hawa Aden Mohamed, director of women’s rights group Galkayo Education Center for Peace and Development (GECPD), pointed out even if he did, it would be largely meaningless.

“The woman who performed the operation has not been arrested but even if she was, there is no law that would ensure she is punished for the act,” she told news agency Reuters.

“This is just one among many cases happening on a daily basis across Somalia.”

Efforts to criminalise FGM in Somalia have been stalled by politicians, who fear it will alienate voters who believe it is a religious requirement, while girls who have not undergone it are reportedly taunted for not being cut.