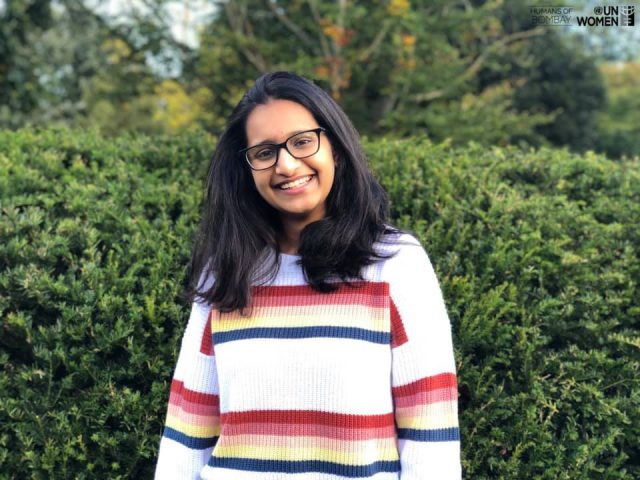 “During my first year of studying law, I was part of a project that raised awareness on women-centric issues like forced marriages, honour killing and Female Genital Cutting. I hadn’t heard about FGC until then and was shocked when I discovered that a girl’s genital organs are tampered with… just because people believe that it preserves a girl’s virginity. This apparently ‘purifies’ the girl– I was disgusted!
But what appalled me more was the fact that most people were unaware about this– the common response from my friends and family was, ‘What does that mean?’ FGC is prevalent in 92 countries, including India and the stats are alarming– globally, every 11 seconds, a girl is forced to undergo gential cutting.
I wanted to raise awareness– I spoke to my father about starting a global youth-led organization to do this. He said, ‘Be the change you wish to see!’ With his words, I founded ‘Scarlet Udaan’ and got on board 8 other students from across the globe to work towards ending FGC.
We started collaborating with human rights activists to create webinars and podcasts. We also started a storytelling platform to share survivor stories– after word spread, survivors reached out to us directly.
I broke down while speaking to an FGC survivor from Nigeria– she’d undergone a very severe form of cutting, when she was just 7 and spent most of her childhood in the hospital. She menstruates for more than 14 days a month, has terrible stomach pain, and can never become a mother. ‘I really wanted to have kids,’ she said and burst into tears. After our conversation, she said, ‘Young women like you will change the world.’
I can’t imagine the pain these girls have gone through. Another survivor told me that it was common for the women in her family to undergo FGC– in fact, it was her aunt who’d cut her. I was repulsed when she told me that after the cutting, her family celebrated and ate cake– all the while, she was bleeding and in terrible pain.
In the last 3 months, we’ve been able to reach out to over 11,000 people via social media. In our training sessions, we try to normalise conversations about FGC amongst the youth– we’ve even directed a few survivors to therapists. The only challenge so far is to get men interested in this conversation– when I say ‘Female genitals’, they shy away.
Once a man said, ‘But this is about women, how can I help?’; even others who passively support us are reluctant to opine. They fail to understand that FGC is also a man’s issue; men are equally responsible.
Because the problem is so deep-rooted that it will take years to have actual impact. The international community wants to eradicate FGC by 2030– but for that to happen, we need to talk about it, we need to spread awareness. And we NEED to do this for every little girl who’s at the risk of being mutilated.”

IWD 2021: Reflections on Women’s Day and a Development Initiative

Living with “the rapist”