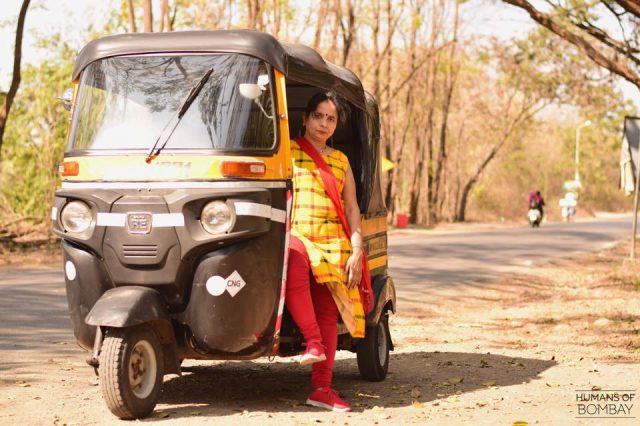 “I was in the 10th grade when I saw a rickshaw for the first time–I was especially fascinated with how the meter worked. It wasn’t long before I befriended the auto-drivers and told them, ‘Bhaiya, mujhe bhi chalana sikha do!’ I pleaded with them until they agreed.
Driving an auto became my favorite pastime. Soon, news about me driving spread across the village. People would say things like, ‘This is unbecoming of a woman,’ leaving my parents disappointed; they didn’t get my obsession with wanting to be a rickshaw driver.
Suddenly, I was being shown pictures of potential husbands. But that wasn’t what I wanted at all… and my dreams should matter too, right? So, I decided to run away. I left a message to my parents saying, ‘I want to be independent. After I’ve made a career, I’ll return.’
All I had was 12 rupees in my pocket as I hopped on to the first train to Pune. I was terrified, but I also knew: it was now or never. In Pune, I found temporary refuge at an NGO and began visiting the Auto-rickshaw Sangathan every day. There, I was told, ‘We can’t trust a woman behind the wheel.’
But I didn’t give up–I got my license; a few women-groups helped me drive autos when regular drivers were absent from duty. But it was difficult to get fares–customers would be surprised to see a woman in the front seat. They would hit on me or say things like, ‘Aren’t you meant to be at home?’
I just couldn’t earn enough and got evicted from the hostel I was staying at. So after work, I’d take my auto back to the service centre and sleep in it. And I knew there was only one way out of that life–I had to buy my own auto.
When I approached the government for a permit, the officials remarked, ‘This is a male dominated profession.’ I’d reply, ‘What if I wear a moustache? Will that get me the permit?’ I fought tooth and nail there–it took me 4 months, but I finally got it!
I ran to the bank to seek a loan–I was so happy when I bought my auto! I’d done it… I finally returned home to my parents; when they saw me, they cried. Dad even washed the auto before I travelled back to the city! And it took me a year, but I paid off the whole loan!
Still, it was tough–people would vandalize my auto and once, a traffic constable hit me; my union members protested against this. That’s how I met my husband; he was my strongest supporter. He’d proudly tell everyone that his wife was a rickshaw driver! In 2001, we even started our own travel company.
But my real dream is to start an academy to train female auto-drivers. It’s simple–why should any job be out of our reach just because of our gender? A woman can do everything a man can, and she can do it just as well. And let me tell you this: women are good drivers. And anyone who thinks differently, should sit in my rickshaw once!”