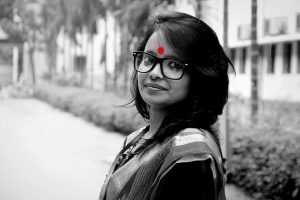 Laxmi is weeping. Her hiccups made her words discrete to understand what she wants to say. I gave her a little time to calm down. I know her for a couple of years. I met her when I went to Khulna two years ago for my work. The gloom that was seen in the eyes of a quiet gentle girl, today is desperate – to die, or to survive.

After she came calm, I asked, ‘what happened? She said, ‘Save me! I can’t live like this.’  ‘Even though I understood something, it is not clear to me even then. After a little bit of normalization, I heard her unspoken words. Five years have passed since marriage. She is being harassed by her husband– mentally, physically, and sexually. A small fault is made serious by him and he tortures her.

I don’t think there is any need to describe those. Is there any difference between the women in Bangladesh how they are tortured by their husbands? There is gloom in her eyes and her face.

‘What do you want to do?’, I asked. She said, ‘Didi (sister), I don’t want to continue this marriage with him. I can’t live like this. I want to settle in Dhaka. I’ll find a job for my living. And then I want to live the rest of my life on my own.’ I said, ‘Discuss this matter with your family first; you should talk to the other members of the family. If you want a divorce, it’s ok but don’t you think you should tell them his faults?’

She said, ‘I informed them. I have talked to my parents. But I was tortured there too. They said that I can’t satisfy my husband and that’s the reason for torture. And they also said that even if the husbands torture this way, the wives have to accept that. And his family has seen in front of their eyes. They never say a word to him.’

I sighed at the thought of this. Men and women both are living in the shed of patriarchy. Then I said, ‘File a case. Ask for divorce’. I wasn’t ready for what I heard next. I didn’t even know that in the Hindu law of this country, there is no word called ‘divorce’. What is this! What would a Hindu woman do when she is tortured by her husband?

I started talking with random people about this issue. I want to know what could be done or what is said in the law. But what I found was terrifying. I console Laxmi and asked her that she should decide first what she wanted and if she could stand against the law and this society. Also, she will have to fight for the rest of her life. It is her decision if she could carry this or not. And then we can help her.

As this girl is asking for a solo living, she will also get separated from her family. Her family already decided that they would not stand by her. And as her husband had a hint that she is planning to leave him, that guy has hidden all her educational certificates. Her ornaments are locked and the tortures got doubled.

She asked me, ‘didi (sister), if I don’t get those certificated back, I won’t be able to get a job. My only way of survival is to be self-reliant. He is locking that door too. But how can I even prove that he has taken away those papers?’ It seemed like I was her only hope but I couldn’t find what to say. I was feeling suffocated. I was feeling myself a failure.

By the custom and source, the Hindu law can be divided into two parts-

In the eleventh century, a Hindu scholar named Bijoneshwara made this law. This is actually the series explanation of Jagyablka’s law. On the other hand another scholar of Hindu laws, Jimutbahana made the ‘dayvaga law in between the thirteenth to the fourteenth century. Dayvaga is a mixture of the main ideas from Manu sanhita, jagyabalka sanhita, and Narad sanhita.

If we compare these two laws and go through them, we’ll find that in heredity, the rights of the women are better in ‘dayvaga’ than ‘mitakshara’. In the others parts of India, ‘mitakshara’ is followed but in west Bengal and Bangladesh which means the Bengali Hindus follow ‘dayvaga’.

In the past days, the Hindu laws were a mixture of regional practices and religious rituals. In the British period, by the toil of some local idealists, the then parliament have made some important changes in the law, as such

It is important here to mention that in the partition of 1947 the Hindu laws in India were amended in a positive way. Such as ‘Hindu Marriage Law’ in 1955,  adopting a child in 1956, the heredity law in 1956 (amened in 2005, in this law the son and daughter have the same share), special marriage in 1960, etc. but in Bangladesh, there were no steps after 1947. As a result, we are still living the dark past.

Now let’s talk about the results of Hindu law.

Now let’s talk about if divorce is possible in Hindu law. it is sad but true there had been no reformation in the divorce-related Hindu law in Bangladesh. So divorce is not possible legally. At best there can be a solution of separation as per the law of 1946. The wife can file a case under this law and ask for separation with maintenance. The court will see and decide. It is important to mention that in India, both the husband and the wife can ask for a divorce as per the law of 1955.

There is no law about divorce in Bangladesh. So a woman can’t ask for it even if she is brutally tortured. Though she can file a case and get separation she can’t get permission to start a new life. As her husband is still alive she can’t start a new life. Have you ever thought of that tortured woman who has to continue with that husband? How does she feel? The women who got separation but can’t dream of a new life? In spite of that, a Hindu man can marry more than once at a time.

What kind of tragedy is this? What advice can I give Laxmi? Shall I advise her to file a case under maintenance and separation? OK, she may do that. The court may even go in her favor. And she starts to live alone.

But is that a proper solution? Is it only food, cloth, home, and treatment enough for a normal human being? How would you secure the sexual life of that woman? If we even consider that the woman would think of starting a new life, is it possible? Will this society leave her in peace? Won’t this society attack her with its law and rituals?

More importantly, she has no right to dream of a home with a husband and children. It may sound ridiculous but that woman can do nothing but pray that her husband may die. Only by his death, she can be able to start afresh Otherwise, she would have to live in that man’s house or live separately with the permission of the court and live a lonely life.

Raja Rammohan Roy bad fought against the Sati ritual, but who would stand against the tricks of patriarchy in this 21st century? It is clear that the elite Hindu leaders of this country don’t want that divorce law. After the partition, there was passed in India in 1955 but in Bangladesh, the old law is still going on. It is high time we raised our voice against this. We have to create social awareness. We have to compel the government to pass the divorce law for the liberty of Hindu women.

Link to the original article in Bengali: https://womenchapter.com/views/18380

Fahmi Ela has completed MSS in Anthropology, Jahangirnagar University. Women empowerment is her only passion towards which she wishes to contribute through her writing. She is a regular writer of Women Chapter Bangla.