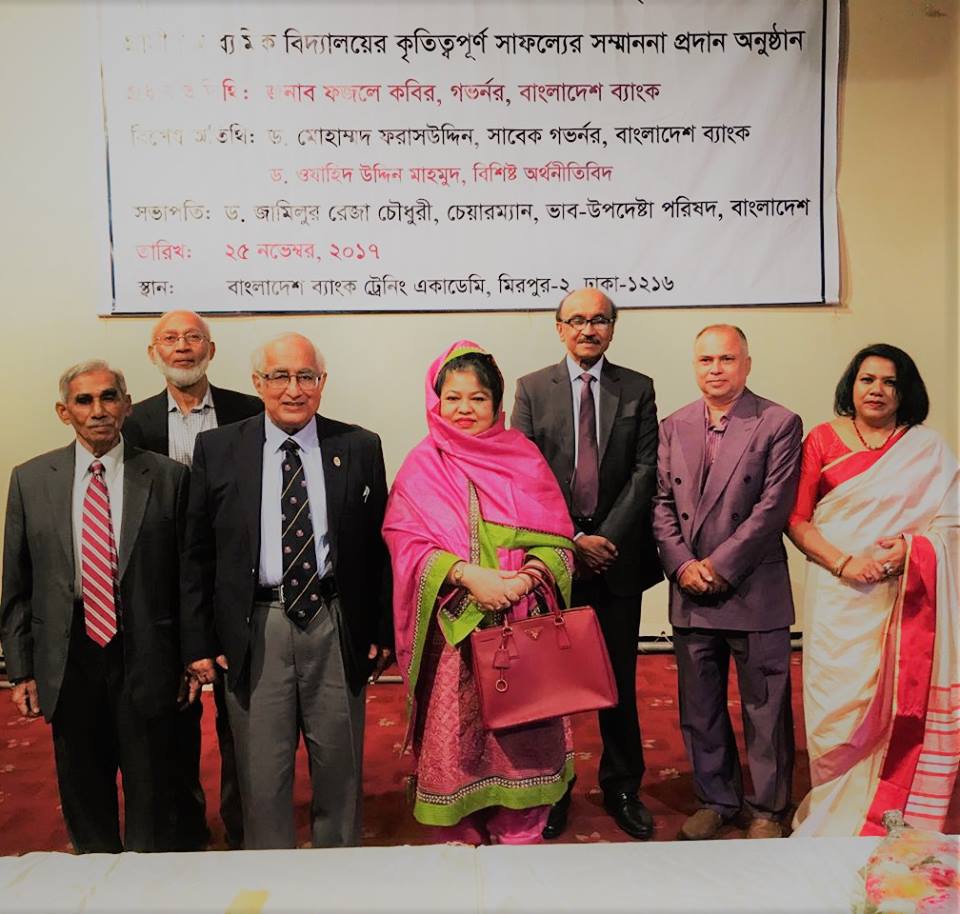 Pamelia Khaled is an Anthropologist, Sociologist and Environmentalist. Currently she is conducting her PhD research in Curriculum Studies and Teacher Development at Ontario Institute for Studies in Education (OISE), University of Toronto. She is one of the regular contributors of this portal. We wish her all the best in her endeavors.

VAB is a  charity organization based in New York, set up by Non-Resident Bangladeshis (NRB) registered in both USA and Bangladesh IN 2000. It is dedicated to improving the quality of Education in high schools in rural Bangladesh to enable students to attain Digital, English and Communication skills and achieve better school performance. It aims to expand its activities through philanthropy within the country and abroad. Volunteers Association for Bangladesh Canada is the chapter of VAB, which was established in 2012 under the leadership of Pamelia Khaled and a few like-minded people of Toronto, Canada.

The Governor of Bangladesh Bank Mr. FazleKabirpraised and appreciated about the VAB Model and felt enthusiasm learning VAB activities and its model that includes teacher empowerment, school empowerment, and student empowerment project. Each speaker was hopeful to see the success of a sustainable model development of VAB.  Chowdhury Mufad Ahmed, additional secretary of the education ministry said, the government plans to take up a massive $16 billion programme for secondary education to transform the sector by improving the quality of education. The plan will help developing employability skills of secondary graduates. If the proposed plan become successful the quality of secondary education will be improved.

During the event, this encouraging speech was given by Pamelia Khaled the President of Volunteers Association for Bangladesh Canada on the occasion of VAB Award event. The VAB Award was given to the rural teachers and students who performed outstanding academic achievements and teacher development areas. President Pamelia Khaled thanked the Honourable PresidentDrZamilur Reza Chowdhury and all the respectable VAB members and guests who were present in Volunteers Association for Bangladesh (VAB) Award event.  In her speech, she said that after long eight years, I have got an opportunity to come in Dhaka for a short visit for my Ph.D. Data collection. And I’m so glad to be present at this significant award event. I’m a doctoral candidate working as a researcher with the Department of Curriculum Studies and Teacher Development, University of Toronto.

In 2009 I conducted a comparative study with BRAC primary school and Government primary school in Bangladesh. During the study, I felt BRAC and its stakeholders covered primary education in a great extent but there is a lack of support for 15 percent of Bangladeshi youth, a large number of them are not in Secondary education. Thus, I decided to write my Ph.D. proposal to study on Bangladesh religious and secular education.

And I was looking for an organization, who is already on the field and working to improve Bangladesh Secondary education. I am very lucky I found Volunteers Association for Bangladesh, known as VAB, in Bengali‘vab’ means the idea.  In 2012 with a support of a few likeminded people I opened a chapter of VAB in Toronto, Canada. We name it as Volunteers Association for Bangladesh Canada, VABC.

We were lucky enough during the launching event we have got tremendous support to complete 6 Computer laboratory schools in Rural Bangladesh. VAB Canada also raised money for poor people, who were suffering from inadequate resources. VAB Canada also raised funds to support scholarships. Over the period, we raised some funds not enough though, I should mention that it was never been enough, we need more funds to support our Bangladeshi children. However, the fund we raised that will be handed to VAB Country director as soon as possible.

Already we learned about the some of the commendable accomplishment of VAB and its further plan and commitment from other speakers note. I am committed to myself to support more for Bangladeshi needy children, as soon as, I’m done with my study. I request you all to support this good cause. Thank you!

After her urge towards the audience she received an instantaneous response from the audience, and a group of her Dhaka University friends, colleagues and her Childhood friends donated on the spot and committed for further donations for Bangladesh’s poor children.

Pamelia Khaled donated 1 lakh taka on behalf of VAB Canada, which was donated by the local donors. And she also donated 1000 dollars from her Doctoral completion Award (DCA) for VAB Children, the DCA scholarship she received from Ontario Studies for Education, University of Toronto. She ended up with a sweet note that a scholar’s money goes to scholars. She anticipates that VAB will produce many scholars in future and they will contribute to transforming Bangladesh.The Award event was astounding. The commitment of NaeemaHouque, who is  Pamelia Khaled’s childhood friend and contribution of the Group of Volunteers Association for Bangladesh Canada members who are Pamelia Khaled‘s Dhaka University friends made the difference. They all committed to supporting and donating to VAB Children. President Pamelia Khaled‘s Scholarship money donation changed the meaning of philanthropy. Her commitment to continue supporting to the  needy and poor brought smile on the faces of  VAB Children, VAB Teachers and VAB parents and VAB members. It was a great support from Volunteers Association for Bangladesh Canada for VAB Children.