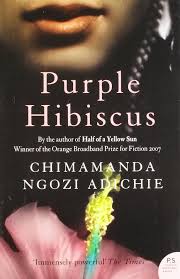 Purple Hibiscus by Chimamanda Ngozi Adichie is a novel set in post-colonial Nigeria and tells us a story about family dysfunction, domestic violence, political outcomes, charity, and extreme religious outcomes. This is the debut book of the author that she released in October 2003. Chimamanda was only 25 when she wrote this wonderful novel. This critically appreciated book has received several honors and awards for its fascinating story and presentation.

The main character of the novel is Kambili Achike, a 15-year old teenager who is shy and gentle in nature and narrates the whole story. The story revolves around the Achike household where she, her father Papa Eugene, mother Beatrice, and brother Jaja lives a lavish but restricted life. Eugene is a devoted Roman Catholic who believes in his own rigid religious lifestyle. He is a successful businessman and proprietor of a Nigerian newspaper that speaks against the military government without any fear. He does a considerable amount of charity work for the people in his community as well. He is a hero and known as a brave personality who does not fear to speak the truth for people. But Eugene is a totally different person inside the Achike household. He follows very strict religious beliefs and wishes all the family members also to follow those. When anybody’s views or interpretations contradict his own, he turns into a ferocious husband or father. He endorses perfectionism in his lifestyle and expects his family members to do the same. His wife and children are exposed to severe abuse. Even Beatrice goes through miscarriages because of beating. He does not hesitate to torture his children for silly matters. There is a political war going on in Nigeria and secret war is going on inside the Achike palace. The military coup in Nigeria and the family struggles are hard to differentiate. With these two themes, the story gets going.

The story takes a brilliant turn when Kambili and Jaja go to their aunt Ifeoma’s house. Ifeoma is not like her brother. She is a University professor, a widow, a mother of three children, and most importantly a liberal person who likes to think and work in a progressive way. The environment in her household is very light, unlike Achike’s palace. Kambili and Jaja are introduced to a very friendly and pleasant home atmosphere for the very first time there. Ifeoma always encourages her children to exercise freedom of speech, something which is absent in Achike’s house. Kambili discovers a new self in this place. For the first time, she could take the taste of freedom, wisdom, and constructive discussions. She starts voicing her opinion. Here Kambili meets Father Amadi, a very intelligent, handsome, and modern priest who is known to Aunt Ifeoma and her children. His sense of humor and personality amazes young Kambili. She falls in love with Father Amadi despite understanding the fact that their relationship does not have any future. Father Amadi feels the same for her too. This is why when he leaves for Germany, he maintains contact with Kambili.

The ending of the novel is somewhat unpredictable but leads a road to new hopes. Beatrice poisons Eugene and Jaja takes the whole responsibility of the death. He is jailed. After three years, Jaja is about to be released from prison. Everything has changed in these three years. Mama Beatrice becomes totally silent. She was silent before as well but this time guilt and self-pity dominate her. Only Kambili is able to remain free from her past struggles. Aunty Ifeoma’s family now stays in America where Ifeoma maintains two separate jobs to support her family. The novel ends with a ray of hope that the miserable condition of Mama Beatrice will improve after Jaja’s release and they, as a family, will be able to live in a peaceful environment without any political tension around them.

Purple Hibiscus captures the condition of a post-colonial Nigeria and its political challenges in a brilliant way. The sudden military coup, people living in fear of unnecessary arrests, the coercive government and middle-class lifestyle of Nigerians, etc. are blended with punches of metaphors and a mixture of languages. It shows how a coercive government can create fear among its people and destroy their well-organized households. Familial conflicts are another important ingredient of this novel. How religious fanaticism makes a person greedy and selfish reflects in the character of Eugene. Eugene and his contradictory religious beliefs initiate a series of unfortunate events in their lives that end only in his demise. Eugene hates his father Papa Nnukwu because he practices traditional African religious beliefs. Eugene is very rude to him and lets him live in a miserable condition. Kambili and Jaja are not allowed to meet or talk with their grandfather. Even when Papa Nnukwu dies, Eugene avoids attending the funeral. This proves that Eugene was just another victim of colonial cultural arbitration. Achike household had everything- love, perfections, money, property, and wisdom but nothing was enough. All these things were subtle. Eugene’s violent behavior with his wife and children erased the value of his love towards them. It also depicts the silence of domestic violence victims who try their best to hide all the pains and sorrows and protect the social image of their arbitrary abuser.

The character Kambili is the main attraction of this novel. Her growth as a person is written wonderfully by the author. From a shy introvert teenager to a sensible extrovert, her journey remains the best turning point of the story. Kambili is the only person from the Achike household who achieves full freedom in her later life. The path and the process were very difficult. It’s very inspiring to see how she voices her opinion and interpretations breaking her past abusive cycle and traumatic experiences. Aunt Ifeoma is another character to look out for. How she balances her religious beliefs and modern outspoken lifestyle is something that gives new hope for a politically broken community. The purple hibiscus from Ifeoma’s garden carries the symbol of a vibrant, delicate, and prosperous life beyond all colonial tyranny and conflicts.

Last but not the least, the writing and story-telling method of the author, Chimamanda Adichie makes the novel stand out as a masterpiece. She uses Kambili as the narrator of the story and it’s so brilliantly done that readers are sure to find themselves delving into the character as if they were Kambili herself! The story is very engaging and full of plot twists. It keeps the reader wondering about chapters of life. To conclude, Purple Hibiscus is a must-read novel to understand, explore and enjoy the post-colonial state of Nigeria, its conflicts, and the beginning of a new era there.