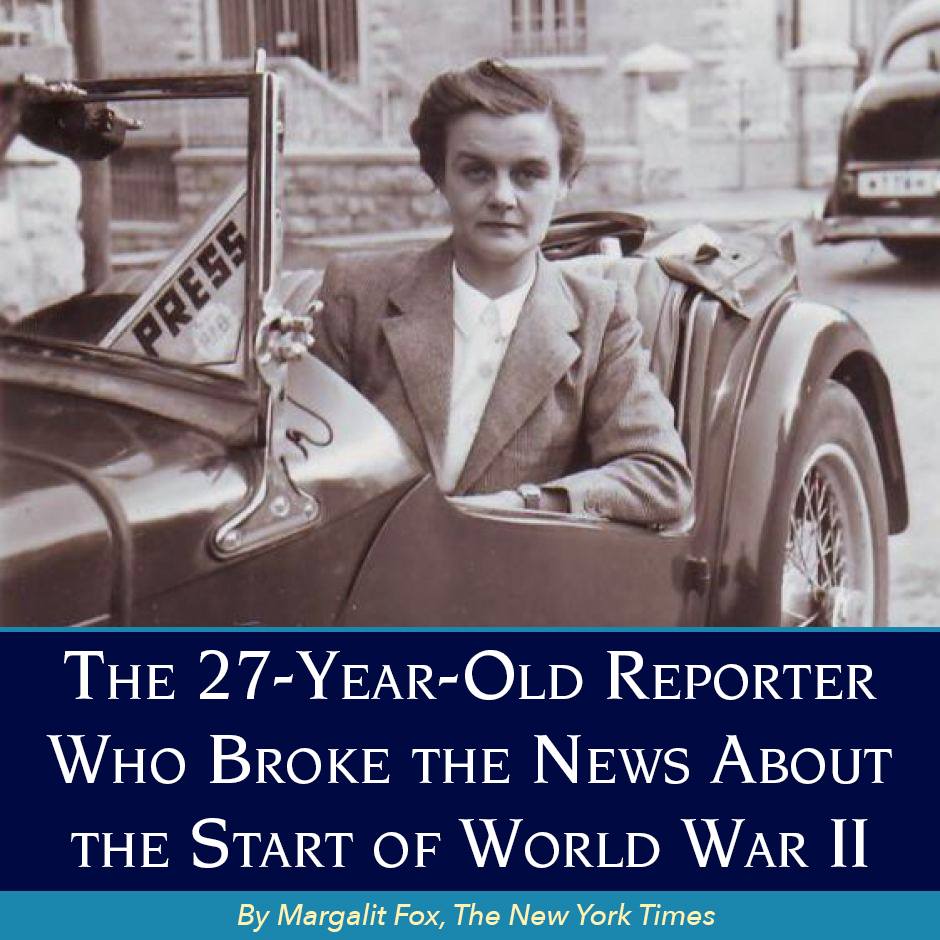 Clare Hollingworth, the groundbreaking British journalist who famously broke the news about the start of World War II, was only 27 years old when she made the scoop of a lifetime — one assisted by a well-timed gust of wind! Her reporting during WWII launched a 40-year-long career that she often spent reporting under fire from war zones in Europe, Asia, and North Africa. “Clare is a prodigy, one of those extraordinary people who has not recorded history but helped to make it,” says journalist Max Hastings, “She was a pioneer among women journalists and among the first generation of women war correspondents, who proved that they needed no example from men either in reporting gifts or courage.”

As a young woman, Hollingworth was eager to report about the growing European conflict so, in 1939, she traveled to Warsaw, Poland to aid refugees from the Sudetenland, the region of Czechoslovakia that had been annexed by the Nazis the previous year. She wrote about the refugees’ plight in small British publications and The Telegraph took notice of her work and hired her as a correspondent for the region. Three days after being hired, on August 28, she commandeered an official car from the British consul general and drove over the border into Nazi Germany. On her return, a gust of wind led her to what The Guardian recently described as “probably the greatest scoop of modern times.” The wind lifted part of a tarp which had been erected to hide the German side of the valley from view. Through the gap, as Hollingworth later wrote, she saw “large numbers of troops, literally hundreds of tanks, armored cars, and field guns.” She knew immediately that Germany was preparing to invade Poland and hurried back to send the news to her editor. Hollingworth’s article, a world exclusive, was published on August 29; German forces invaded Poland on September 1, marking the start of WWII.

Hollingworth worked as a correspondent for British news throughout WWII except for a period in 1943, when General Bernard Law Montgomery banned British women correspondents from the front lines; undeterred, she took a job with the Chicago Daily News covering Dwight D. Eisenhower’s command in Algiers. In reflecting on that period in one of her books, she observed, “It was essential to be able to go without washing, sleep in the open desert and live on bully-beef and biscuits for days on end. Many male correspondents got themselves sent back to Cairo because they could not take it.”

Widely respected in journalism circles, Hollingworth was famous for her daring and forthright manner. In one famous instance in 1962, while covering the Algerian War, right-wing French paramilitaries stormed the hotel where much of the press was staying and kidnapped a British reporter. Fellow war correspondent Tom Pocock recalled the scene: “Clare turned like Joan of Arc to the rest of us standing with our hands up — ‘Come on!’ she said, ‘We’re going too! They won’t shoot all the world’s press!’ So we all marched out and started climbing into the jeeps.” The fighters released the journalist unharmed.

Failing eyesight eventually forced Hollingworth to retire in 1981, but she never lost her drive to report from the center of the action. The New York Times reports that she was known to sleep periodically on the floor on her Hong Kong home well into her 90s to keep from “going soft.” In 1989, at nearly 80 years old, she was seen climbing up a lamppost in Tiananmen Square for a better view of the government’s crackdown on democracy protesters. Hollingworth, who died last year at the age of 105, received the Order of the British Empire in 1982 for her services to journalism and lived for the last 30 years within sight of the Foreign Correspondent’s Club in Hong Kong, where “Clare’s Table” was always reserved in her honor.