Rasha N Abushaban (Gaza): Well, it is already the third day of the war. Last night I wanted to get some sleep, but not everything we want we can get. I was hoping for the following day to bring peace, but today the peaceful moments were few. The night started with hysterical and intense shelling from both plans and warships. I felt last night’s airstrikes and naval shelling were the strongest and most terrifying since this offensive had begun. Though, tonight I felt the bombs having more percussion effects that shook my house with everyone dropped. I don’t like to call it a war. I keep remember the quote of the American writer Noam Chomsky that he said during the 2012 assault over the Gaza Strip:

“Israel uses sophisticated attack jets and naval vessels to bomb densely-crowded refugee camps, schools, apartment blocks, mosques, and slums to attack a population that has no air force, no air defense, no navy, no heavy weapons, no artillery units, no mechanized armor, no command in control, no army… and calls it a war. It is not a war, it is murder” – Noam Chomsky

When you restrict people to one spot, with nowhere to run, nowhere to hide, to be slaughtered, to destroy their homes, to kill their children and women, this is not a war. This is a murder. This is a genocide. I keep wondering if the people from the West, in Europe, in the UK, the US, in Australia, do they really know what is happening to my people? To the Gaza Strip? Why do they keep silent about it? Is it because they do not know? They don’t need to be Muslims to stand for Gaza, they just need to be humans.

But no wonder they are silent, it has been evident that the Western media coverage are pro-Israeli. Their presence in Jerusalem, Java, Ashqalon, and Telaviv is not comparable to their presence in Gaza. The Israeli propaganda is predictable, as are the Western media who parrot Israeli propaganda. What Israel does regularly is to treat every little, or big, incident in the course of the Palestinian-Israeli conflict as an event in itself, divorced from its background and from the century-old conflict. Thus, if a useless Hamas rocked is fired on a target in Israel, the rocket becomes the story and no background is permitted to explain the political context. Worse, Zionists treat any attempt at contextualising the event as further evidence of “services to terrorism”. The people around the world should not be blinded by their media, they must look for and know the truth. Or at least see the wider picture and then make judgement. 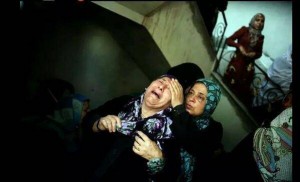 I managed to sleep for a few hours. I had turned on the radio to hear the news that Ban Ki Moon, the UN Secretary General had asked the Rafah borders to be opened. Why did he ask Egypt to open the crossing, but not ask Israel to stop its offensive against Gaza? Is this what the United Nations is for? Finally I heard later during the day that Egypt decided to open the Rafah Crossing to evacuate the injured, and allow medical supplied to be bought into Gaza. As for the health sector, it is overwhelmed and collapsing. But is not like opening the gates of heaven and escaping from this hell. For the hundreds of injured people who are going to travel by cross across the desert in this burning summer for 8 hours to reach Cairo, it is the opening of gates to their misery and suffering.

I also heard the news of a sewage pumping station (Al Muntada) that houses four pumps, and serves over half of the Gaza City area was damaged. As a result, raw sewage is now being discharged into the sea. Weeks before the offensive, as the result of the energy crisis, the main sewage water treatment plant had to pump the sewage water with less very initial treatment to the sea. Authorities announced that the Gaza sea beaches were dangerous and contaminated. The sea is the only haven for Gaza residents. The only place they can escape to and spend for entertainment and pleasure.

During the last FIFA semi final game between Argentina and Holland, some civilians got together in a rest house on the beach to watch the game. They were targeted by the Israeli war planes. Six of the twenty young men who were watching the game were killed immediately, and the others were severely injured. While the whole world is busy with the World Cup, we in Gaza are busy with the War Cup this year.

I was thinking about the international charity that is expected to be given to Gaza after the war ends. These funds will be used to restore Gaza, that is until the next assault comes and destroys everything again. Palestinians need stances, we need decisions, we need lobbying against the oppressor to prevent this happening again, not waiting until it happens then patronising the people of Gaza with aid.

I am writing these words while feeling responsible for all who will read this to know about the offensive. I want that Mothers who saw her children’s body parts being collected in front of her eyes to tell her story. I want the stories of that Father who lost all his family members, of the young man who got his legs amputated after he was bailed out of his house ruins, of that lady who lost her fiancé who she was due to marry in a few weeks. The story of the Father of Maryam al Masri (10 years old), to tell his story of losing his only child in a brutal way. The story of that young mother who was taken to the hospital morgue to recognise the dead bodies of her two children. The story of the medics who retrieved the body parts of victims from underneath their houses’ ruins. The stories of the Doctors who are functioning with the very basic and most simplest supplies in hand to treat the injured and killed in the overwhelming hospital conditions. 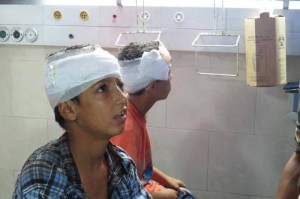 I want these stories to be told. The stories of their misery and the scars made in their hearts. Is Israel not creating more people who hold a vedette against them? It is not only the Palestinian resistance fights who do, it is all these thousands of unarmed and powerless people who want nothing more than the demise of this aggressor.

‘Day Three’ of the operation ‘Protective Edge’ is almost over, and Israel has just announced it will continue the operation in Gaza, which will most likely include a ground offensive. A ground invasion of an area with a landmass of 365 square km, 41km length, and 5-15km from North to South. Tens of rockets are fired into Israel inducing some (not confirmed), but the total death toll of Palestinians stands at 90 and close to 700 injured. There have been more than 650 Israeli airstrikes. At least 160 homes flattened to the ground by F16s. I still hope for the next day to bring us some peace.

If you love her, learn to let her go

The price of being a good girl

Barriers to Progress for Gender Equality