Afra Sampreety: Thinking never makes anyone worse, it can only make them better.’ It was the 23rd of February. Mamma and Papa decided that we were going to spend the day in Amsterdam, celebrating Zaara’s birthday. We had a whole day to tour around Amsterdam. 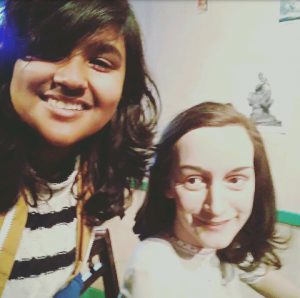 Since we had arrived in Holland, I had been dying to visit this city, just so that I can see the ‘Secret Annex.’ But so far we had seen only Eindhoven and Den Hague. So I was very happy. However, we decided to keep our visits limited to the museum of Madame Tussauds and Anne Frank’s house due to not having enough time.
I am a big fan of Anne Frank.

I am literally obsessed with her. She is so much like me! Her life seems quite similar to mine with all this being in hiding, leaving friends and loved ones behind etc. But obviously my situation is a lot better than hers. I am lucky that I am still alive; my family is alive; my friends are alive.

And another difference is she could express her feelings better, and write far better than me. I saw the movie on her just before I came to Holland. It seemed the feelings were still fresh. And the book! The emotions you feel while reading her diary never leaves you. You feel you’ve suddenly lost a friend. You become a part of her life.

I got the book as a gift from Mamma when I was ten. The first time I read it, I felt sorry for her, didn’t like the other members of Secret Annex, and I was cursing Hitler. But as I read it for the second time when I was officially a teenager, my feelings were slightly different. Her sudden anger towards her mother, her thoughts, her secrets, her inner feelings, all this felt so me! I felt as if she was expressing my thoughts and feelings in her words. The feelings I felt while reading the book this time felt more real. It was more painful too. To think of a girl exactly of my age stuck in a laboratory like place for two years was shocking. I mean she couldn’t even have a proper bath.

So we went to Madame Tussaud’s first. It was fun as expected. Who wouldn’t love to take pictures with Lady Gaga? Even if it’s just a statue. After that we walked to Anne Frank’s house. It was a lot of fun for Zaara and me to try to find her house based on our knowledge from the book. Anne had given a lot of details in the book, even which trum I needed to take to go there.

Suddenly we heard a bell. What? Is it the church then? Anne did mention the church bell. Their house was just near the church. We searched for it. But it turned out it was just the tram’s bell. 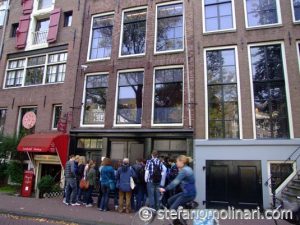 After asking several people, and walking around the same place for no less than six times, suddenly we heard a heavy but melodious bell. Obviously it wasn’t the tram’s this time. It was…yes! The church! And we FOUND IT! The big church was right in front us. And the house? Just to the left as mentioned in the diary. There was a long queue outside. We waited for about an hour before finally getting in there. It wasn’t an old house. I wished they had preserved it as it was like in Anne’s time because it would make me feel closer to her.

So we entered the house. Cameras were forbidden inside. The first thing we saw were four pictures of Anne Frank captured at the same time. Quotes by her were written on the walls along with the time those were written. Obviously I knew all her quotes. It felt like a dream. Anne Frank used to live here! Yes, right in this house!

We went to the next room, a short film was being played, with Anne’s (dramatist’s) commentary. There was a room also where we could see many of the belongings of the members of the Secret Annex. An old yellow six pointed star was on display. This kind of stars used to be worn by the Jewish at that time so that they could be easily distinguised from others. The whole office excluding Secret Annex was turned into a museum. I saw the letters Margot used to send to a Latin teacher by the name of Elli.

These letters, they are the witness of that time. An electric shock goes through my body every time I think of being even a little close with those people. I also saw many pictures of the Franks and Van Daans. There was one of the Franks in Miep Gies’s wedding with her husband Henk. The typewriter used at the office, accounts etc. were also on display.
We were quite close to the hiding place. I was so excited. Each step I climbed on the stairs, made me feel so close to Anne Frank. Because Anne herself stepped on these same spots. I was feeling like the luckiest person alive. 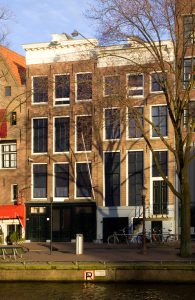 Whenever I read her diary, it felt like I was Kitty and she was speaking to me. I became a part of ‘Secret Annex.’ I formed my own opinion of each of the members. I judged them depending on how Anne described (which is quite unfair) them. Whenever the members were frightened, so was I. Whenever they were told to keep silence and to not move, I neither talked nor moved.

Next, we were in the private office, where hiders used to come and listen to the radio. And there it was, the last staircase, just as Anne had described it . It made a terrible noise when I stepped on it. At the end of it there was a book shelf and a secret door. The feeling I had at that exact moment! I can never describe it in words. There were books scattered on the shelves. They looked old, which means they were original. This book shelf, these books had met with Anne Frank. And I’m meeting with them today. Far, but felt close. The difference is just in time, isn’t it? If you can ignore that, I really have just met her, haven’t I?

We got inside through this small door. It felt wonderful after getting in there. I was fulfilling one of my fondest dreams! The walls were pale yellow. The floor was bluish. Awkward combination for these days. The house looked so much like the old time which actually gave me some peace. They can’t just change everything. I wanted to see every trace of Anne. Anne drew a picture of the house in her diary, so I kind of knew the pattern but there was a replica of the Secret Annex showing us who actually lived where and  how the furniture was placed. 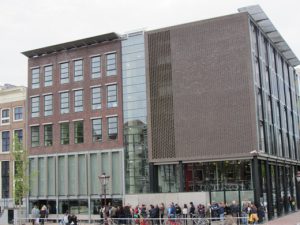 We went to her parent’s room. The room was empty and the window was sealed too. I could smell vintage. There was a bible written in German which, according to Anne’s diary, her mother gave to her. Another witness of Anne Frank’s life. There were pencil marks on a wall bearing signs of Anne and Margot measuring their heights.  This was so real that it made me feel more emotional and closer to Anne.

Next, it was Anne and Mr. Dussel’s room.  Each wall was pasted with film-star posters and paper cuttings. As she mentioned in the diary, “Our little room looked very bare at first with nothing on the walls; but thanks to Daddy who had brought my film-star collection and picture postcards on beforehand.” Sunday, 11 July, 1942.
I could also see some pictures of the royal family whom Anne was very fond of. Next was the W.C. just as it was described by Anne, with a wash basin and toilet. Probably that room would be more interesting to a fan of Mr. Dussel.

We went upstairs. Then it was the kitchen, bedroom of Van Daan couple, general living room, dining room and scullery. There was the Dutch dictionary on display used by Mrs. Van Daan. There was a sink and an empty place to store the gas. So this is the place where all those epic battles took place! 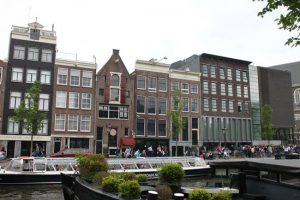 Next we went to Peter Van Daan’s room. I was so excited to see the attic. According to the book, there was a staircase to the attic from his room. The attic was in a way Anne’s place. But disappointingly enough the stairs were cleverly covered with glass and the entrance was also blocked with glass. I tried to watch the attic from below, and it looked quite a mess. Does it mean they kept it the same? Oh my God! And then Papa called and showed me something I will never forget. I went to the other side and leaned out a bit to look up. From there I could clearly see a window and from there I could see the top of the church.

This is the window from where Anne used to see the top of the church. Her place! I automatically drew Anne in front of the window in my mind.

How was I supposed to move from this position after I had seen this view? But I at last had to. Another building was connected with this room (which they had made later). We went there. It was a museum on her life. I saw her real diary, the quote book and the book she used to write stories in. Also, there were details on how and where the members died. A copy of a concentration camp register was on display. It was of the concentration camp where Anne, Margot and their mother were taken to. I saw their names on it. It felt close to Anne again. Apart from this, I saw the book Mr. Kraler had gifted her on her 15th Birthday.

It was one of the best days of my life. The whole time I was inside that house was magical and memorable. I never thought I’d be so lucky to see this place. It was amazing to get so close to her, and be thinking of the same things which she had thought right here. Madame Tussaud’s might have been more fun because we took pictures with Angelina Jolie but visiting Anne Frank’s house was the best. I will cherish this experience forever.
My dream came true on Zaara’s birthday!