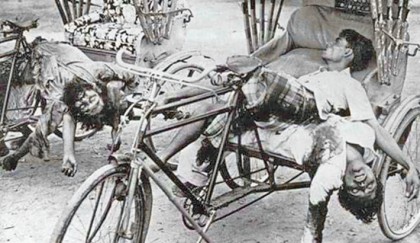 This was a planned military operation to kill Bengali intelligentsia, academics including Hindus. According to Banglapedia, during the War around 991 academics, 13 journalists, 49 physicians, 42 lawyers, and 16 other intellectuals were killed on 14th December (Daily Star, 2020).

The Hindus were targeted for the harshest treatment, with significant indiscriminate. Neighborhoods of old Dhaka which had a majority Hindu population were also attacked. Lorraine Boissoneault (2016) noted that Blood wrote this dispatch two weeks into the bloody massacre that would lead to Bangladesh’s birth. And it happened. Yahya cleverly sent a brutal General like Tikka khan (As a Commander of Eastern Command, (then) Lieutenant-General Tikka Khan was the architect and top planner of Operation Searchlight, the War 1971), he was famous for killing Baluch people.  The military crackdown, Blood cabled, “fully meets the criteria of the term genocide. He alarmed his superiors in Washington continuously.” (Guss, 2013, p, 83).

This persecution intended to kill not the nationalists; it was determined to kill an entire group of people such as Hindus. Dhaka consulate was not sure about the genocide of which group was Bengali Muslims or Bengali Hindus. According to Scott Butcher (a young political officer), the number of killing in the first week and assaults on Hindus and rape across the country suggests Hindus were the clear target (Guss, 2013, p. 81). It was a brutal crackdown. The Blood cable initially meant about the selective genocide for both groups Bengali Muslims and Hindus.

Govinda Chandra Dev, the most respected Hindu philosophy professor at Dhaka University was dragged out from his home and shot dead in front of the Hindu dormitory. The professor was killed cruelly, the only reason was, he was a Hindu, Guss noted.

However, all Bengali Muslim intellectuals were killed at the same time. Initially, Blood was confused, but he was right about the Bengali Muslims and Hindu genocide. Later on, it was apparent that Hindus were the target. There was countless evidence that the Hindu minority was marked out for prosecution, specifically for the first week, as Blood noticed. And reducing the Bengali population is another attempt at killing Bengali Muslims. Guss (2013) described Scott Butcher, the political officer who worked in Dhaka, East Pakistan, also supported that one certain group of people was the target as there was a racial prejudice between Punjabis and Bengalis. Bengalis were identified as weak, debased, converted from Hindus, etc.

Here, I insist my readers think deeply: Muslims worldwide are converted from other religions, including the prophet Muhammad’s ancestors’ idol worshipers. Thus, literally, none of the Punjabis or Bengalis or other Muslim communities are Muslims by borne; they were the converted Muslims too. For Bengali nationalism or secessionism, Hindus are not responsible, but they suffered the most.

The Blood Telegram: Strong Dissent. Nobody was listening to Blood’s cable, the people at White House seemed dry hearted.  Blood and his staff decided to prepare a draft to declare a “strong dissent” from a U.S. policy that they felt morally bankrupt, as the policy was denying to talk about the crushed democracy, social justice, human rights, and the slaughter of innocent. U. S. policy did not want to leak the genocide cable by any means. However, the cable was leaked to the press quickly. Guss (2013) narrated, Desaix Myers (a young development official) lamented, how villages were burnt, people died inside the home, and how he wanted to stop the Pakistan army’s slaughtering. He wrote to his friends about how Hindus were lined up and killed approximately 600. Searching Hindus they did not leave even a small, impoverished Hindu village in the countryside.

Looking at the nature of the killing, it seems to be the naming “Operation Searchlight” had a special aim ‘search and kill’ mostly Bengali Hindus and Bengali intellectuals.

The blunt subject line “Dissent from U.S. policy toward East Pakistan” was enough to denounce U.S. foreign policy. The telegram detonated in all directions to diplomates in Washington, Islamabad, Karachi, and Lahore. But Kissinger and Nixon wanted to remain silent and not pressure Yahya to stop killing the mass people of East Pakistan. To see united Pakistan, they wanted General Niazi (the last Governor of East Pakistan) and General Tikka Khan will control Dhaka implementing by scorched earth policy. So, they were relaxed, thinking this is Pakistan’s internal issue, and they will not say anything even Blood reminded and sent a strong dissent cable. Instead, they decided to remove Dhaka Consul General, thinking he is a maniac. What was in the cable? The cable described U.S. foreign policy’s failure and denounced the White House’s role in defending democracy and overlook the genocide in East Pakistan. Here I briefly describe what Blood’s cable stated: “our government has failed to take forceful measures to protect its citizens while at the same time bending over backward to placate the West Pak dominated government… Our government has evidenced what many will consider moral bankruptcy …We have chosen not to intervene, even morally, on the grounds that the Awami conflict, in which unfortunately the overworked term genocide is applicable, is purely [an] internal matter of a sovereign state. …We, as professional public servants, express dissent with current policy…

From the White House, Yahya had a green light for his killing crusade. At the White House, Richard Nixon and Henry Kissinger knew that a fierce assault was starting, but made no move to stop or slow it. On March 26, Kissinger told Nixon that the Pakistan army had moved in….In a Situation Room meeting, Kissinger said that he had talked to Nixon. …He does not want to do anything to stop the crackdown. He can be accused of having encouraged split-up Pakistan etc. It means that Nixon does not want to warn Yahaya against Civil War. Instead, he was waiting to see after the massacre if Yahya successfully controls Dhaka. East Pakistan was dead, and so about my family. My innocent brother was handed over to the Pak prison and they tortured him again and again, inhumanely. For this awe shuck news, my father lost his voice; he had no words to console my mother as he followed the telegram and handed over the brutally tortured son to the Pak army. My brother was accused as a freedom fighter, which he was not. They tortured him and forced him to give a false statement that he was a freedom fighter, and he detonated the bridge between Jamalpur and Sharifpur. My brother Col. Mujibur, taught at Pakistan Military Academy Kakul, Abbottabad. He was a Captain at that time, he sent a telegram to Jamalpur Pak army chief: my brother is innocent, and he is not involved in any guerrilla activity, please release him. My brother’s appeal from West Pakistan did not melt his cold heart.