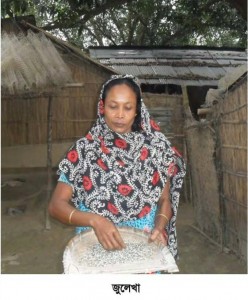 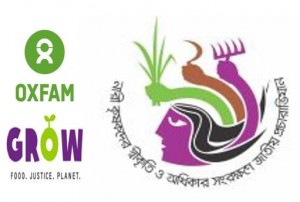 Women Chapter: I got married when I was only 14. I was a student of class five then. I did not know anything of life.

After breeding three children my husband, Tajibar Rahman left me away. A trouble-time started in my life. I stayed at my in-law’s house after he left me. But then I had face negligence and many hard-talks always. My husband’s death led my in-laws members torturing me physically and mentally.

I had to get back to my parent’s house with my children. But my father found it so difficult for him to maintain a family with suddenly arrived extra members. Thinking of my children I started doing agriculture works. My life started with only a piece of 1.5 bigha land given by my father. But as I did not have any savings so I had no money to start cultivation. Then I asked for loan from my relatives and many others.

But not one agreed to give me any loan as I had no wealth.  When I became able to convince them that I will become successful by hard work then one neighbor lend me some money.

Firstly, I cultivated paddy in half of my land and potatoes and mustard in remaining part of land. The first crop of rice fed us nearly six months. And I paid back some of my loan by selling potato and mustard.  But I was not doing much profit as I did not have any training. So I started seeking for way out to good production. Then I started planning for next year.

My mother helped me in this planning. I and my mother discovered that if we start cultivating as sharecropper by borrowing land, then we could do profit. In this condition I and my mother went to an uncle’s place in our village. His name was Ishak, firstly laughed at my idea. Then after convincing him a lot, showing many calculations and my mother requested him to keep faith in me and made him agree.

Being known to my mother privileged me lending his land as a sharecropper. We agreed on sharing crops in 60-40 percent of 10 katha land. I started cultivating sugarcane in that land. Along with that I kept cultivating paddy, potato and vegetables in my land. By the grace of god that year it was a good crop. And I sold my own production of paddy and potato after satisfying my family needs.

That year I earned a profit of 8000 Taka. Many men told a lot of things about my land borrowing. They said how a woman could do agricultural work! Some of them made me a laughing stock. But at the end of the year seeing my success they all became quiet. Gradually they became jealous at my success.

Next year Ishak uncle willingly asked me to borrow 2 bigha land. And my success continued that year too. I took a mango orchard on lease with this years 30000 and last year’s saving 5000 Taka on total 35000 for next two years. I earned my investment in the first year. Next year I had a profitof 25000 Taka.

Thus my money started saving. I fed my family with the produce from my land and bought new 5 katha land in my own name. I did not give my land to other for share cropping instead I cultivated them. I and my mother looked after these lands time to time. My son grows up well. I have sent him to school. This is how gradually changes happened in my destiny.   I have educated my two daughters, got them a good marriage.

Now I am an owner of 8 bigha land. I try to help the poor, widow and destitute women in my village. To bring changes in their future. By this time I did not avail any governmental help. I heard a lot about training and government loan, but never found me lucky enough to get them.

I believe if girl child is not under-estimated, if their potentiality is not disrespected, and they got proper facilities, they will become useful to her own, her family, her locality, and for the country and its people as well. They can bring changes to this village-based and agro-based country and inspire a lot.