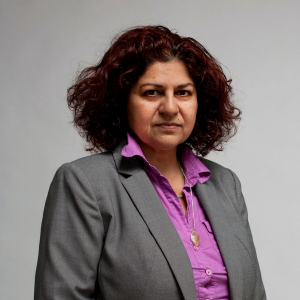 Yanar Mohammed is an Iraqi feminist and co-founder and director of the Organization of Women’s Freedom in Iraq (OWFI). She opened the first shelters for women in Iraq and works to end violence against women in a context where Islamic opposition groups, governing institutions and militias are targeting women. Yanar divides her time between Canada and Iraq, and attended the University of Toronto. She received the Gruber Prize for Women’s Rights in 2008 and Norway’s Rafto Prize in 2016.

Please tell me about your work.

My work is focused on protecting women in Iraq from the crimes of patriarchy. The government has allowed an agenda that is dismissive of women’s rights. The government policies are based on religion and are extremely patriarchal and tribal, and they preach hatred of women. Iraq has become a place where polygamy is encouraged, where honor killings are allowed and child marriage is an everyday occurrence.  All of these practices were almost forgotten in the modern history of Iraq. The [US] occupation, in 2003, turned all this around and allowed extremists groups in Iraq to rule and decide how women’s rights would be violated. We don’t just shelter women, we do advocacy for women’s rights. We confront practices against women that need to be addressed and we try to change legislation or public practices and opinions. Women should not have to compromise and be ruled by the patriarchs of the country. Women should not have to compromise for religious or tribal values of the country. Feminism can save the future generations from these crimes.

Could you give us an example of how women are impacted by current policies and practices in Iraq?

Recently, there was a woman who had to stay in her house because of COVID-19. She had been in an abusive relationship with a husband who had been abusive for years. His oppression of her reached the point where she couldn’t take it anymore. She burned herself alive and eventually died. If this woman could have reached a [women’s] shelter, this would not have been her destiny. The [government of Iraq] is trying to close our shelters, close women’s organizations – so that women can’t escape abusive situations.

Why is this happening in Iraq?

Iraq has seen many changes in the past couple of decades. There was a political vacuum after Iraq’s occupation by the United States [in 2003]. And then, there was the empowerment of those who want to rule based on religious dogma. They began to let their laws prevail. Iraq has gone back to the equivalent of the dark ages where women are objects to be used, abused, enjoyed, or disposed of! But this is also happening at a time when women, through the Internet, have more exposure to the outside world. The government is trying to impose restrictions and oppress women when most young women have a cell phone in their hands, and they can see how other women can live. This means that there are huge numbers of young women escaping their abusive relationships to seek their destiny.

So, on the one side, is a government that is tribal and extremist an imposing its understanding of women, family and community. And, on the other side, are young people who see the freedoms that they could have. The clash between these two leads to punishment, violence, honour killings, and domestic violence. The clash between the two forces means that we need to protect the women from their families, from the state and the security agencies of the state.

Can you tell me about some of the tools being used to silence women activists?

The government has found elusive ways to attack women, for example with smear campaigns. It is not unusual to see social media posts lying about women. A colleague of mine was targeted with her photo and a caption warning that she is a trafficker of minors and saying that she is looking for teenagers to buy and sell.  The security and intelligence agencies of the government have electronic armies that are working for them to fight women activists through the Internet and smear campaigns.

The government also uses the laws against us. For example, a lawsuit was filed against me as OWFI’s president and against our shelters. The government asked the court to dissolve our organization. The reason they gave is that we help women escape honour-related situations and that we help LGBT people, and we normalize the acceptance of LGBT individuals to the broader Iraqi population. And yes, we do that. This is our mandate. But they are saying that what we are doing is against the law and that we should be shut down. Our best chance to win the lawsuit at this point is to educate the judge about the importance of the work that we do.

The government starts with smear campaigns, then court cases, to stop you from doing your human rights work, and if that doesn’t work, then they kidnap and kill you.

What are some strategies for resistance being employed by women activists?

How is the COVID-19 pandemic impacting your work?

This situation is double jeopardy. As women human rights defenders, we are still trying to do our work while the government monitors us, threatens us and tries to shut us down. At the same time COVID-19 has locked us up in our homes. We are under so much pressure now. We are getting requests every day from women who cannot bear their situation of abuse at home anymore. They are saying that they will kill themselves if they cannot get help. Women have to stay home all day long with their abusers. The requests from women for shelter have more than doubled, and every day we hear about a suicide case, about a woman who has set herself on fire. The abuse of women has increased so much because of the self-isolation which in Iraq is administered as a curfew. If you step out of the house, you will be arrested. If you are living in an abusive situation, it is explosive.

What is your hope for the future?

Most of my expectations for the future are on the women who have been in our shelters and have transformed from victims to activists. They understand that our well-being depends on the strength of the women’s movement. They are now the frontline of women’s work in Iraq and are the strongest allies we have.