“We were once told that we couldn’t participate in the peace negotiations because there weren’t enough chairs in the room. We’ve heard the most ridiculous excuses. We’ve also been told that we can’t participate because the warring parties don’t want us there. But that didn’t stop us. We want to be where the decisions are made.” 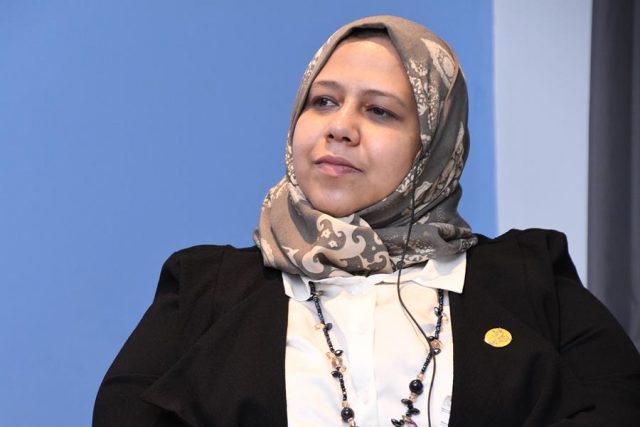 Muna Luqman is a Yemeni peace activist and advocate for human rights. She is a co-founder of the Women’s Solidarity Network, Chairperson of the Yemeni foundation Food For Humanity and member of the Women’s Alliance for Security Leadership. Muna  works with grassroots organizations in Yemen and with the Yemeni diaspora to demand women have a seat at the peace negotiations table. She lives in Egypt, having had to flee Yemen in 2016.

How did you become an activist?

As a human rights activist, you see all the violations that are causing suffering. In Yemen, even before the war, there was suffering. We have had an unstable country for many years now. I have lived through airstrikes. I have been through the street fights. I was caught in a crossfire. Part of my house was demolished in the airstrikes. I lived through the siege of Taiz. I saw violations of human rights and I was obliged to do something.

How is patriarchy impacting the work of women human rights defenders?

It is important to analyze what is going on and why women are excluded – excluded, not just from the political processes or peace negotiations, but from everything. My work in a women-led organization and my work as a human rights defender is impacted by the patriarchal system. And not just in the government, or locally, but this patriarchal system exists internationally. Yemen is dominated by men. The rules and processes are all dominated by men. Women’s organizations can’t get funding. Women can’t get recognized internationally. The political parties, the media, and international forums are completely dominated by men. It is only when we organize, work with other networks, mobilize, and make noise that it becomes difficult for us to be ignored.  But we are still being excluded. We are being ignored because we are not approaching the peace process the way that men do. We are ignored because we are looking at issues of justice and human rights. We are calling for all warring parties to cease hostilities. What disappoints me is that what we are calling for isn’t viewed as peacebuilding. But if this isn’t peacebuilding, then what is?

What are the tools being used to silence women activists?

Threats to women human rights defenders and peacebuilders have been increasing at an alarming rate. And it is worse in conflict zones. What is sad is that I have seen women activists pull away from their work. They have been bullied and threatened. I have been bullied. I have been threatened. The warlords aren’t just using guns and tanks. The warlords know the importance of women activists, so they are attacking women on a personal level. Women are being attacked online. Women are being attacked with disinformation campaigns. Women are attacked on social media. Women need recognition and they need support. If not, then they are alone. And this is what the warlords want.

How are you and your colleagues contributing to peace?

Women’s participation in peace negotiations is our main focus. The men peace negotiators keep saying “there aren’t enough chairs”. Literally. We were, literally, told once that we couldn’t participate in the peace negotiations because there weren’t enough chairs in the room. We’ve heard the most ridiculous excuses. We’ve been told that we can’t participate because the warring parties don’t want us there. But that didn’t stop us. We want to be where the decisions are made. We want equal participation and representation. We are calling for the monitoring and evaluation of the peace process. We are calling for the cessation of hostilities.  We are calling for an inclusive peace. Why? Because Yemen is a diverse country. We can’t have a one-uniform peace negotiation like the UN is doing now. Also, we have a lot of arms in Yemen and countries and people who want to bring in even more arms into the country. The people are starving to death, but millions and millions of dollars are being spent on a peace process that is not working. Everyone is ignoring the suffering of the people. Stop the airstrikes and hostilities. End the siege in Taiz. Lift embargos. We need to have a dialogue with the South. We need to stop the bloodshed. Women need meaningful and equal participation. And women are experts in economics, in peace building, in humanitarian issues. Women are doing the work of peace. It is work that must be recognized and valued.

How is the COVID-19 pandemic impacting the work of women activists?

Yemenis are starving to death and living through airstrikes and street fighting. And now, with COVID-19, the challenges are immense. Advocacy for women defenders has been affected by so many cancellations of events. And the focus on COVID-19 will make women activists more vulnerable and more isolated in the face of the warring parties’ threats.

What are some strategies for resistance employed by women activists?

We collaborate with international coalitions to amplify our voices. We speak to the people in Yemen and to the international community, but we also want to speak to the warring parties. We can’t build peace without our voices being heard. Guns don’t talk, people talk. We are also using the UN Security Council. We are not turning back until we bring peace to our country. Human rights defenders do their work at great risk to their lives. Recognition and visibility, internationally, can help keep women safe. We need to protect women activists and peacebuilders.