It was the first day of 5th grade after the half-yearly exams and a month-long vacation. Homeroom teacher, Mathangi ma’am comes in to announce there is a new admission. We were taken aback. Who comes in to join a school in the middle of the year?

Nevertheless, we got later excited because it was an all girl’s section with multiple grouping and its always great to have a new member join in the crew to strengthen your group. We shot competitive glances to one another; hoping to claim the new student to oneself.

Arya, the elite British fashionista has a barbie and One Direction fan club of her own with a couple more “pretty girls” in the group. I swear to God, if I meet across Arya and her friends in the present day, they are probably all supermodels of Victoria’s Secret or girlfriends of celebrities.

The other group was the Indo-Pakistan clan who speak in Urdu all the time and analyze the newest episodes of ‘Iss Pyaar ko kya Naam Doon’, my best friend Alaa, despite being an Arab is a part of this clan and prefer sitting together in class. The other major group was Filipina-Korean clan some of whom were neighbors or roommates and they discuss mostly Kpop and anime. Habibtey and I were members of the prefectorial board who had direct communication with the supervisors so everyone wanted to have amicable relationships with us. We were welcome to any groups thus circulated but were permanent to none.

Miss calls in someone named Samantha. There were smiles across Arya’s face hearing such Americano name, hoping to have a fellow white neighbor as she was surrounded by mostly brown Arabs and Asians; curiosity on the face of the desis to welcome their new role model.

Who enters the room? Samantha Ngugi or Sam. A single parent Kenyan lawyer recently settled in Sharjah with her dark-skinned, tallest in the class and afro haired daughter. She had a noticeably large forehead with a hairline further than ours and smooth beautiful skin. I was awestruck because it was the stage of puberty when most of our skins were breaking out but Samantha had an eye flashing glow. Yet not everyone was pleased to see her. Arya’s mouth dropped following with angered in disappointment. Samantha gave her welcoming speech to the class and had everyone’s full attention, in a very demeaning way. Habibtey signaled to Arya that Samantha must stink and was pinching her nose hard. The rest of others started the same gesture that caught Samantha’s eye. She was extremely soft-spoken and had a very feminine voice in contrast to her well-built tall body. She didn’t complain and went on to take her assigned first-row seat beside Ayesha. The instant Mathangi ma’am left the room, Ayesha jumped off from her seat and ran to sit at the back, leaving an empty seat beside Samantha. It was a ruckus. Arya screaming “yew” at the top of her lungs, the Indo-Pakistanis making leud comments in their dialect, the entire class issued a judgment that Samantha was nasty and stunk. I got busy trying to calm them down while Habibtey sat and laughed along to Arya. I asked her to get to work, we were monitors, not bullies.

And as for Samantha, I could smell her lime cologne and no body odor thus revolted to Arya and her peeps. “You guys are overreacting. She doesn’t stink.”

Habibtey, being my colleague, as presumed to back me up, comes and shuts me up instead with pointless excuses that she’s been in the Emirates longer than me thus she has a better understanding of ‘negros’ because I am from Bangladesh and there were no negros in my school. I was startled. Sam had this indescribable look of humiliation and agony in her eyes; she completed all her classes sitting next to an empty desk.

For a change, I sat beside her for many classes. She was finding it challenging to catch up to the syllabus so I helped her with my notes. I was astounded that my dearest friends started trolling me! Ayesha called me out saying that I was going against my friends and it won’t end well. Arya started to hate on me, overlooking my prefect badge that they were once afraid of. I realized why the fear had vanished; Habibtey said she’d rescue them in case if I ever complained. Being an 11 year old in her first year in Dubai, things were still very alienating therefore I wanted to balance both ends without breeding problems. I loved being friends with Samantha nevertheless wanted to settle things with Arya too. I clearly remember Sam being one of the only ones in the class using a ‘sanitizer’ when it was pretty uncommon and unheard of yet notwithstanding such amazing hygiene, she was named ‘Stinky Sam’. I wanted to end it through negotiations but the initiative itself multiplied Arya’s ego and she was butthurt with my supposed ‘treachery’. My best friend Alaa took my side and tried to mitigate matters, starting with apologizing to Sam for taunting her too. I often wonder if Alaa retracted in the fear of losing me as her friend or because she genuinely transformed.

Finally, Samantha complained to Mathangi ma’am at a point when she couldn’t take it anymore. It was the bravest thing for her to do because regardless of being a monitor, even I was terrified of Arya and Habibtey’s shenanigans. To date, I admire Sam for her valor and sturdiness as after what happened that day, it would have been agitating to see her not stand up for herself. A month before the final exams, that very day the entire class was singing the lines of ‘that’s what makes you beautiful‘ by One Direction. Samantha too sang along. That’s it! Arya lost it. Stinky Sam cannot sing along to One Direction. It is just unholy and she committed a grave crime. Samantha’s full depiction of Mathangi ma’am began to get everyone concerned. Our teacher scolded everyone, including me for not complaining sooner. Everyone was threatened with detentions and Habibtey’s badge was take away.

The year started with some surprises of open fires, cyclones, and a coronavirus pandemic. Something else that struck us amidst these were leaked video footage of the gruesome death of a black man named George Floyd who was unconscious and forcefully pinned to the ground, beneath three police officers, showing no signs of life. Racism is no surprise. Although it was an eye-opening surprise that how pitiful humans are to put an end to someone’s life so casually in merely 8 mins and 46 seconds, only because he was black. It made me ponder upon Samantha’s everyday life now, as a black person.

It shook me to the core wondering where lies the safety of mankind. I just hope things aren’t as they were in 5th grade: my classmates now repent their actions, both the ones who were vocal abusers and also the ones who remained quiet to avoid trouble and allowed a girl to get harassed. I cannot help but fear Sam’s safety because the world isn’t scared of Mathangi ma’am’s scolding nor detentions.

5th grade soon ended with the unmasking of my former friends and a small present from Samantha as a ‘thank you’. It was a little curly-haired woman holding a heart in her hands waiting to hand it over. It has been 9 years I last met Samantha but I still hold onto the gift to date to remind myself to stand up for what is right and not letting anyone belittle one’s self-respect and humanely characteristics. It will be a lie to state that Samantha did not face racism any more or that Arya’s mindset has changed. The same Aryas now spread awareness of #blacklivesmatter but hardly realize the mistakes they made in their own lives. Attain a pure mind, free of such inhuman negativity because that’s what makes you beautiful. 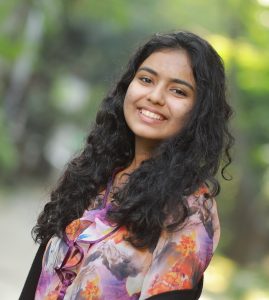