One of my close relative had her aim in life set to become a good housewife. Her dream was to cook delicious foods, take care of her children and roam around with her husband. Having a well-established husband was all she thrived for.

From childhood, she was considered as a pretty girl. She used to be bombarded with wedding proposals because of her beauty. That was exciting! She could not go anywhere without anyone noticing her. Someway or the other, proposal from relatives used to come on a regular basis. Don’t think that because of being pretty, she used to indulge herself all day long in taking care of her outlooks. On the contrary, to become a good housewife, after pursuing her Masters’ degree, she started learning cooking by heart. We were sure that she will have a happy married life. Because she was a pretty, talented and homely girl, like everybody wants in a wife.

But we think of one thing and it ends up being something else. She was married off to such a person who did not at all like the idea of her being just a housewife.

Her husband started getting pissed off at things like- table filled with delicious foods and her excitement to take care of her husband. He asked her wife why she sat around at home all the time. He also added not to cook for him all day long. He also reminded her that she did not pursue her education just to become a housewife.

All the relatives were shocked! What was the man saying?

The woman also got perplexed by her husband’s attitude! Whenever she found me, she used to ask every nitty-gritty of my job and wanted to know if I had to work hard or encountered any challenges as a woman. She was scared of the hard work of an official job.

Gradually, problems started to arise between them. Her husband did not even acknowledge her when she would dress up for him. He was stuck to only one point and that was- she had to get a job. It didn’t matter if the job was unpaid, she could not stay at home all day long. Her husband did not like her in the kitchen and doing makeup all the time. The problems started to grow between them in a broader manner day by day.

This was an exceptional case. There are other girls like her, who want to live their lives as housewives. Their purpose remains as to become eligible for a man by attaining one or two degrees in their education. They want to be married to a well-established man who can take care of them with no problem at all.

So what if girls only aim to become housewives? What is the problem there?

No problem should have risen. But it has when we claim for gender equality and respect in every aspect, especially in the household.

On the other hand, a girl is always told that she has to take responsibility of another man’s family and his relative’s from her childhood. She maintains all these responsibilities in return of the cost for her subsistence (food, shelter, clothing, etc.). I know it sounds awkward, but it’s true. It’s alright if she doesn’t earn a living, that is her husband’s liabilities.

There are few girls who think of looking after their parents. Most parents also do not hope to be looked after by their daughters. This lack of hope makes them able to marry off their daughters and make them distant from themselves. This scenario is common in our society. I never heard of anyone who considers girl’s employment as an eligibility during a marriage proposal. People don’t care about it.

When the situation is like this, where one act as the donor and the other acts as the acceptor in the family, then, equal respect or equal rights, whatever we call it, becomes an issue of claiming. Otherwise, it will not be attained. Women would need to speak up or beg for their deserved positions in the family. They have to cry, make appealing arguments with facts and theories to make other understand that women are human beings too. They are mothers.They do all the household chores, take care of the children and the whole family. Their contributions in the family, society also have the economic impact. You have to make arguments for her deserved denmohor and subsistence.

“I earn money when you just sit around and enjoy its benefit”- as long as the society believes in this statement, gender equality and respect will not be achieved. However we make our argument strong with theories, researchers, policies or campaigns, equal rights will remain a utopia in every sphere of life even if it is either for the custody of the child or for being the heir of the properties. In a society, where income is considered as the prime competency of an individual, then without income, equal respect in genders can never be imagined.

And yes, people who try to create an obstacle in a woman’s earning source, they are scared for the very same reason. Not only in the household but also in the broader society and in religions, the key cause of the inferior existence of women isn’t her body, it is her capability of earning a living. The more women become progressive towards employment, the more they will move toward freedom. It is a woman’s choice on which life she wants to choose.

The original article was published in Bengali site on January 16, 2017.

Link to the original article: 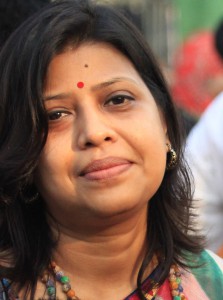 The writer is a regular writer of Women Chapter Bangla and a Development worker by profession.

Tahiya Islam completed her graduation from the Department of Pharmacy of East West University, Dhaka, Bangladesh. She is currently living in Selangor, Malaysia. Apart from her love for writing, she has  a knack for public speaking as well . Her career goal is to become a teacher and be a motivational speaker.