Prominent Nigerian environmental activist Priscilla Achakpa became a wife at 16, a mother, and then a young widow. Disinherited by her husband’s family and on her own, she returned to school, earning postgraduate degrees in management and business administration as well as development studies. She found a career in banking, then abruptly changed direction.

Today, she’s the executive director of the Women Environmental Programme (WEP), a nonprofit, nonpolitical and nonreligious organization that works to raise environmental awareness in rural Nigeria, and empower women politically and economically to address the environmental issues that affect their lives. Chief among them: climate change. Priscilla has been named an Ashoka Fellow, and an “Eco Hero” by Nigeria’s Channels Television and Germany’s Deutsche Welle. 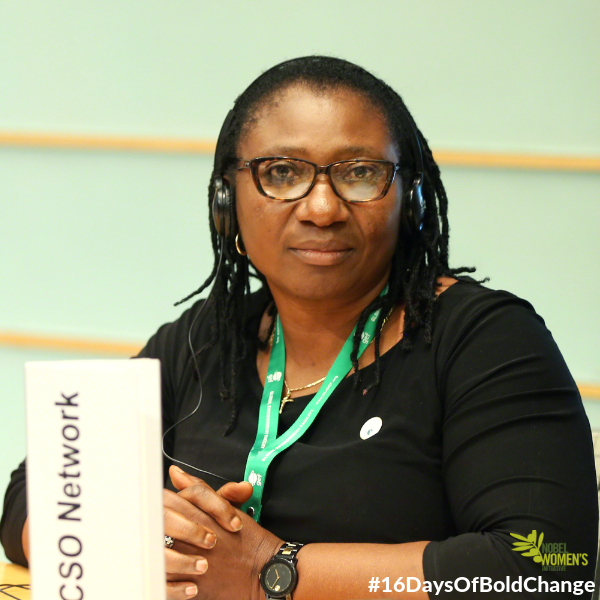 How did you come to make a move from banking to environmental activism?

I sensed I was missing something – that there was a need for me to find work that was more challenging and that would allow me to give back to the community. That feeling pushed me to venture out and begin to take courses on the environment. It was completely different, more complex, more scientific. But I wanted a challenge. I wanted work that inspired my passion.

In 1997, two journalists and I discovered that textile industries in Kaduna state, central northern Nigeria, were discharging effluents directly into the environment. Most were going into the Kaduna River, where peasant farmers, largely women, were growing vegetables. They had begun having skin diseases that they blamed at first on witchcraft. We engaged scientists who took samples, did tests and discovered that everything around the area was toxic. We eventually took the industries to court – for me, that was the beginning of activism. In 1998, we became the Women Environmental Programme – the first women’s organization in the north entering the area of environmentalism.

Why have you chosen to concentrate on climate change?

Our program is active in five thematic areas: environment, governance, climate change and peace and conflict transformation. Gender issues are at the core of everything we do. Including them is crucial if development programs are to be relevant and sustainable.

Climate change is one of the most urgent issues of our time and it has already impacted Nigeria. Desert encroachment grows at an amazing rate, which has increased tensions over land ownership, including fights between farmers and nomadic herders. These fights also worsen ethnic divides. Prolonged droughts, heat waves and wind have affected the north, our food producing region. Lake Chad, one of the world’s largest lakes, which in the past provided water and supported fishing communities, has shrunk by 95 percent. People, especially women, have been forced to migrate, which brings its own challenges. In displaced persons camps, women are frequently harassed, even raped.  Rivers have dried up, which means women must travel kilometers to look for water.

Environmental changes are hard on their own, but they also amplify problems and inequalities that exist – including gender inequality. Historically, women have had less access to resources, less power in decision-making; this makes us more susceptible to the risks of extreme weather events. It’s important to mainstream gender into climate change adaptation strategies, while also working to improve resilience to its impacts.

How does that come out in WEP’s work?

In the region where we work, semi-rural women farmers did not have the ability to preserve tons of perishable crops like tomatoes, peppers and other vegetables. About three months ago, we were able to install a solar drying tent, with all materials obtained locally. We also worked with the community so they would be able to run the drying themselves, which means the work will be sustainable. Community members formed cooperatives, to take turns in the drying. The result and testimonies were amazing. Less food goes to waste, nutrients are preserved, and the farmers can sell the dried produce, increasing their income. We funded this effort ourselves, as an experiment, but of course one tent is not enough. We’re looking at ways to scale up – not just within this community; there are many requests from others. The ministers of agriculture have been impressed by it, but you know that governments can be slow to act. We’re looking for partners to support doing more work like this.

You’ve written scholarly papers about your work and addressed international meetings focused on climate change. But you’ve also said that “my real work is on the ground.” What do you mean by that?

When we act globally, we need to translate what we’re doing into local context. We’re doing this – and not only in Nigeria. We have offices in Burkina Faso, Togo, Tunisia. When I hear the voices of local women, grass roots women, women who are daily affected with the challenges of climate change and the challenges of how to take care of their families – they inspire me. They make it feel as if it’s me that’s been affected.

Right now, WEP is working with some local organizations that have not seen $1,000 in funding in their lives. When you give them support, the result of what they do is amazing.  You cannot overemphasize the happiness and commitment these grassroots organizations bring on board. When I hear the stories they tell, they inspire me to do more.