“Bua” was not the actual name of the woman who was trying to go back to sleep in a tiny room on the first floor of an apartment in Dhanmondi, Dhaka. She was Anori, a poor woman like thousand others like her left her village home in search of a better life, and found work as a cook in one, Habibullah Shahib’s house. In the void of the rich and the needy, the formal names were hardly mentioned at all. Anori’s was called “Bua” by all family members, Salam Habibullah, her employer was just “Shahib,” and his wife, Nasrin Begum was “Begum Shahib.”

Anori often wondered how “Bua” meaning a sister, could be applied to her by young and old in her employer’s house; perhaps relationships had different meanings to the rick.

In the dark of the night, Anori’s senses tried to understand what had interrupted her sleep. I am bone tired from the long day, and should not be kept awake. Anori told herself. Her room was named the ‘servants quarter’ and was one of those tiny rooms that apartments usually spaced near the kitchen. She removed the sari covering her body for some air. The room was stifling and hot with the With the kitchen stove running all day; the room got so warm that the tiny wall fan that was whirring on could do little to cool down the stuffiness. Aged around thirty-five, slender and a face that could make her a Bengali belle, Anori was efficient with her work around the house. Cooking, cleaning and serving food were her main duties.

Anori sat up on her bed. Ah, that sound again, footsteps! It was a familiar sound, but one that managed to put her nerves on jitters, she didn’t want to hear it. She peered into the darkness of her room, there was no one yet, but she knew that footsteps carried a body. She sank back on the pillow, unconsciously pulling back the end of her sari over her body. Those footsteps! Oh yes, it must be the sound relating to the added duty in the house. Two years back when Anori came to work in the house of her present employer, her ‘Shahib’ and ‘ Begum Sahib’, she was only the household kitchen staff. She had accepted this job at the businessman’s house for the pay was good. But and then when the Begum Shahib became sick, Anori’s work changed too. The lady of the house was seldom around the kitchen as she was recovering from major surgery. And then as she started taking Begum Shahib’s food to her room, Anori became aware of the sly looks of the Shahib, and gradually came the actions from those sly looks.

As Anori strained her ears, again came the sound of stealthy steps from the dining room. And then she heard a door close softly, the one that led from the master bedroom to the dining space. And then they advanced toward the kitchen. Her room was located next to the kitchen, and so footsteps came clearer. Oh, he was coming, the steps sounded nearer!

Anori straightened her clothes with firms hands as if covering herself will help her from what was coming. She felt like an animal hunted down for lust. Men who acted on their lust were not humans really. “Manush na ei shob betara.” She often told herself. As she listened, the familiarity of the footsteps told her that Shahib had crossed the dining space and was near the kitchen. Anori squeezed her eyes shut, and pressed her lips as the footsteps got closer and closer. She sat up again, and tugged at the ends of her sari, covering her shoulders and then put her long hair into a bun. Her hair had come loose and had wrapped around her body. The darkness of the room hid her sweet face, and it also hid the dread in her large, dark eyes. Oh, he will be here soon! She alerted herself over and over, glad that it was the night, she felt a bit hidden from those lustful eyes. 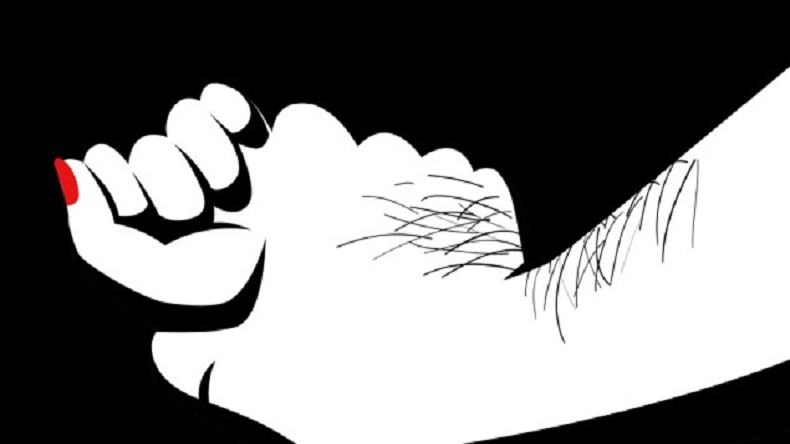 Although, it has been some time since Anori had left her abusive husband in her village home and started working as a live-in cook in Dhaka. Every time Shahib came to her for her body, she felt like running away. But life was not easy. Oh this shameful duty, a year more and then I will go. Anori told herself. She was saving money with the hope of going back to live with her mother and to set up a tea stall in the village. Shahib didn’t visit her before the lady of the house had a stroke and became bedridden. After a month of the lady’s ill luck, Anori had started filling the gap for Begum Shahib’s body.

The kitchen door creaked, and as Anori strained her ears, she heard the steps pause a while. Her body stiffened as she heard the click of the door’s handle. She fell back on her pillow, alert to the footsteps drawing nearer every second. She could sense extreme caution in the way the footsteps neared, stealthy like a killer attacking his victim. Momentarily her thoughts went back to her husband who used to take forcible possession of her body every night before she left him. Was this any different? She was a victim, caught in a bloodless killing game, men sucking her blood for lust.

Anori raised her head and looked at the door of her room as it opened softly. A grayish hint of light in the doorway, possibly from the window of the kitchen, showed the tall frame of the Shahib silhouetted against the doorframe. Anori heard the footsteps on the doormat, and next came the swish of clothes and a distinct body odor that had become familiar over time. The steps came on, closer and closer and then she heard them halt beside her bed. Then came the long and heavy breathing, the soft sound of clothes, the hunter getting ready to strike, a sex-crazed man behind the mask of an honest businessman. Momentarily Anori thought of another live-in- maid from the ground floor apartment, one who had confided of being in a similar situation. The animal-like men had no names to their victims, only ‘He’ or ‘Shahib,’ no one dared say the names for even walls had ears.

As the nearness of the man in her room felt like a death trap cast on her, Anorifelt like jumping out of bed and running out of the house. But there was no way out for a heavy, male body she had become familiar with, came crashing over her own. She wondered why she had put her hair up a while ago or straightened her sari, rough hands ran up and down the body hungrily, and the sari was thrown on the floor. Anori had lost count of the nights of her duty to Shahib. He came on his whim.

Anori recalled the first night when she heard those footsteps, and the master came to her room; she wanted to scream. But there came the offer of additional money: if she gave him what he wanted and kept her mouth shut. Shahib also warned of dire consequences if she leaked anything about her night duties or he would send her to the police with a fake theft case. With the offer of the money, Anori thought, Why not? In the village, the husband used my body, and this one is paying to do so. With the added income she hoped to go home sooner than she had originally planned.  As the Shahib’s body heaved high and low over her, Anori knew that the man on top of her had his ears open. The lady could not get out of the bed, but the teenaged daughter was at home from her dorm. Anori had to summon all her patience and not scream as the man on her went on torturing her body to the pleasure of his one. When would he be done? Anori squeezed her eyes and bit on her lips, praying that she would feel him get up on his feet and walk out of her room.

Next morning Anori was up at dawn and had breakfast for the sick Begum Shahib. When she took the breakfast- tray to the bedroom, she watched the Shahib tending to his sick wife, through the doorway. He looked like a devoted and loving husband from the outside and Anori reminded herself, Men, they are like dogs. No one would believe her even if she did tell them that the polished gentleman was just another sex addict in her own narrow, smelly bed at nights. At times greed raised its head, and there came dreams of having that man in her life, spill it all! She had heard of stories maids laying traps with pregnancies when the masters exploited them. Poverty, when allowed to dream, forgets the limits of its station.

But there was lingering fear behind those dreams. Anori hoped that nothing went wrong with the protection ‘he’ was using. Condoms are known to get torn, and unwanted pregnancies come along. Anori was recalling that recently, nausea had been bothering her in the mornings. Surely it had nothing to do with Shahib and his visits at night?

Anori had a busy day ahead, guests were coming and so lots of cooking to do. Perhaps the guests were going to stay for a week would hold her night visitor at bay. However, her mind wandered around the early morning sickness that she has been having for the past few days. What if she had become pregnant? It would mean either suicide or be shamed to death in her village. Or would she dare to play her cards with the master and take a big lump of money and go, have someone help her with the terminating of the pregnancy?

Anori was cooking chicken as all those thoughts ran in her mind, but she was not at all thinking of how the chicken curry would taste. How could she, when her other duties may be holding her life at stake?

PS: This is a story on behalf of voices for the # Me Too movement, for a sister who cannot speak for herself. Names are changed in respect of privacy.