“I really think that women have the capacity, the will and the wisdom to come up with ideas that are different from men.”

Aiyoung Choi was born in what is today North Korea, moved to Seoul in today’s South Korea, and grew up in China, Taiwan and Japan before moving to the U.S. for college. Her connection to the Korean community in the U.S. started in the late 1980s when she co-founded the Coalition for Korean American Voters. Aiyoung has a long history of working with grassroots movements, including with women’s and immigrant groups. She is also a member of Women Cross DMZ, an organization of women peacemakers mobilizing to finally bring an end to the Korean War. She participated in an historic walk across the De-Militarized Zone (DMZ) from North to South Korea in 2015 to bring attention to the ongoing conflict.

How did Korean peace, and women and peace, enter into the work you’ve been doing?

The Korean War started around 1950, when my immediate family was living in Taiwan. My grandfather was captured by the invading forces moving into Seoul. He disappeared. This plunged my mother into incredible sadness from which she never, never recovered.

As soon as the Korean War ended with an armistice in 1953, my father was recruited by the United Nations Korea Reconstruction Agency. His going back to Korea for that work brought Korea closer to home again, but I was still a chubby, naïve kid without direct experience of the suffering and the brutality of war.

But it was always something we heard about. When visitors came to the house, we captured snippets of conversation about who died and who was separated, and sadness—a lot of sadness.

So, Korea was always in the back of my mind but I had no vehicle to take me there emotionally or mentally, because by then I was in New York. I was very busy with my family. But in 2013, a friend asked me, ‘Hey, if there is a possibility to go to North Korea, would you like to join?’ The whole idea of working for peace with this group just completely took me.

As a member of Woman Cross DMZ, how do you see your work contributing to the peace process between North and South Korea?

I think a big word there is education, and raising awareness—not only towards a peace treaty between North and South Korea and between the United States and North Korea, but the leadership of women in the process. Men have had centuries of opportunities to do this, and it hasn’t gone well. I really think that women have the capacity, the will and the wisdom to come up with ideas that are different from men. I think more and more of the world is waking up to the fact that women hold up half the sky, if not more.

No matter what you say — denuclearize or build new relationships or an era of prosperity— you can’t do that while we are technically still at war. There has been no peace treaty. And our positions towards each other are as enemy to enemy, not as neighbour to neighbour. So it’s important to educate and raise awareness within the general population in all countries — but more specifically to influence the policymakers, who are the ones that will drive what each government thinks is the right thing to do. So our work, to a great extent, involves going down to Washington, D.C. and speaking with lawmakers. 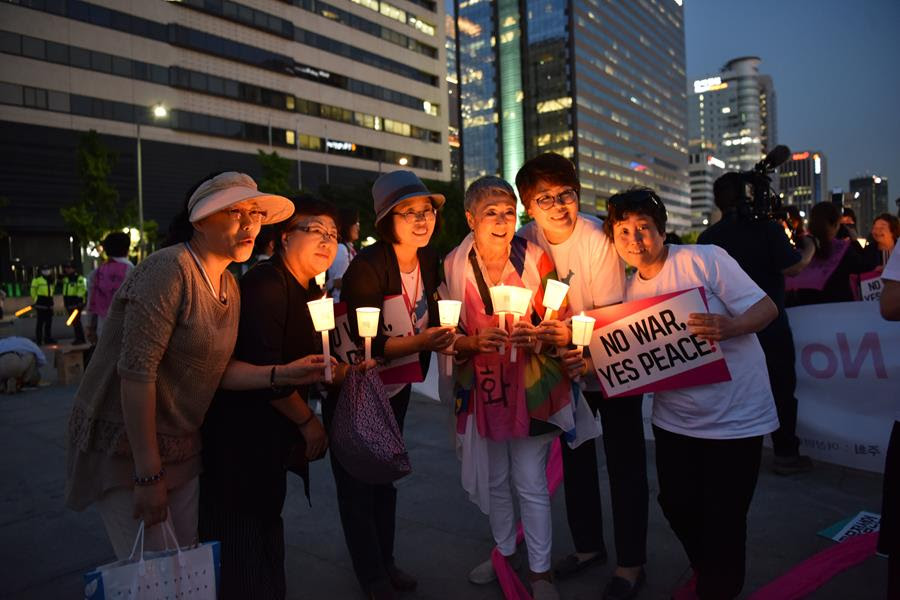 Aiyoung accompanied Nobel Women’s Initiative to Seoul in May for our #WomenPeaceKorea delegation with Women Cross DMZ. Photo by JEEHYUN KWON.

The historic walk of women across the two-­mile wide De-Militarized Zone in 2015, separating North to South Korea, was a groundbreaking moment…what was the emotion like on the ground among other participants?

We needed approval from the North to enter Pyongyang (North Korea) — and then we needed approval from the South to enter South Korea from Pyongyang. This green light didn’t come until the very last moment. But when we came to the moment of crossing, we were welcomed into this very serious, sombre place, with glass shelves under which were these withered documents, the armistice agreement. We sang a peace song, breaking into tears, and hugging — North Korean and international women hugging in North Korea.

What do you think mainstream media is missing?

The history of Korea is one of never being left alone, basically. There have always been larger powers trampling on us, and trying to further their own agendas. For example, Korea sits right between Japan and China. In ancient times, there were interests coming from both sides on how to use Korea. And Western media, I think, fails to recognize that North Korea is a country that has felt the threat of war every day since the armistice in 1953, and more so with the annual war rehearsals, where 28,500 U.S. troops who are stationed in this tiny half of a peninsula, come together with South Korean troops and they rehearse war against North Korea.

What would you like to see from the international community during this peace process?

Support for the two [presidents] in Korea. Support them and see where it goes, because I think it’s headed in the right direction, unless they are undermined by other forces. I would like people to envision their own countries divided by foreign powers. Imagine their own families separated. It makes me cry, and it engages me at the same time.