It’s not ‘only’ about a corporate house being forced to remove an ad from their youtube channel in India. They know their ‘business’ well and will act accordingly.

It is also about how an advertisement or opinion or perception is made to vanish from public view and virtual platform by troll-raj. Swati Chaturvedi’s slim book, dealing with the same topic and bearing the title ‘ I am a troll, Inside the secret world of BJP’s digital army’ is well-read by now. She may be was a bit simplistic in portraying the army as all-male, half-educated with a half-baked English vocabulary, and certainly Islamophobe, but under the same breath she did not forget to mention that, they are monitored by a group of the well-educated right-wing intelligentsia. The brigade, due to the sheer majority, can crack all social media algorithms and make fake news and images go viral in minutes. Similarly, they can bring down things that are detrimental to their ideals. One such thing, typically unpopular with them, is the so-called LOVE JIHAD.

Didn’t something similar happen the previous year during Holi? A teenage girl dropped another teenage boy in her cycle for namaaz, keeping away splashes of colors from his serene punjabi (worn for prayer) and the hell was let loose! ‘Future love-jihadis’, troll-army squeezed brows, and flexed muscles. And this year, it’s even a few steps forward…OMG! An adult Hindu woman has actually dared to marry a Muslim man in an ad for ornaments and they are now celebrating a ‘godh-bharai’ even! So the Muslims have now occupied not only the entire bodily territory of the Hindu girl but also the most important part of it! The uterus! Putrarthe kriyate bharya ‘ et al.

The problem is not merely about the tiny-winy loss of a profit-making corporate company. Their outlet has been ransacked in Gujarat, let even that go. Most of us can hardly afford to buy a piece of jewelry ourselves, especially post-lockdown.

But if a highly opulent, highly powerful corporate can be silenced,  where do we, as non-conforming individuals stand? Are we only to stand bewildered and witness the constitutional ‘secularism’ being reduced to an abusive term not only in a casual virtual tete-a-tete but also officially? Even the honorable governor of Maharashtra finds it supercool to taunt the honorable Chief Minister of the same state by calling him ‘secular’. How?

Having said all that, let us enter the feminist aspect of love-jihad.  The entire abhorrence for Love Jihad comprises not only of communalism but also gross misogyny and sexism, sheer disregard for female’s agency over her own body and sexual preferences. Hence angry trolls question-‘Show a Muslim female wedded in our families, will you?’ Only that much to appease the hugely-hurt Hindu male ego? Well! They need counter possession of the same territory-the female body, the uterus especially.

Inter-religious marriages have always sprung fear and hatred,  not only in Hindu Sabha trajectories but also in the official statements of the more ‘progressive’ Hinduist endeavors. For example, Arya Samaj was aghast on it and they penned down ‘Hindu auraton ke loot’ and ‘Hindu stree-o ke lootne ki karan’, during the nineteenth century so-called Renaissance.

Gradually BJP and RSS have volunteered to shoulder the responsibility. On the other hand, the other side, too, drenches their hands in blood sometimes and a young Ankit Saxena may die.

One may notice the rhetoric that is often used by the families plagued by love-jihad. The lad on lass has been ‘brainwashed’, ‘lured’, ‘kidnapped’. Rhetorics of abduction,  are not they? Even if both the parties are in a consensual relationship, how comfortably they turn is verbally into a case of abduction! We have a Special Marriage act that justifies and respects such marriages, don’t we?

Now let us problematize it a bit. Is not the ad itself quite patriarchal? Does it not glorify marriage and child-bearing? Is it that modern and progressive as the likes of Shashi Tharoor claim? Certainly, it is patriarchal itself, from a feminist lens. Has an ornament store ever been able to sell their ornaments without singing patriarchal paean?  Come on.

It is another story that the post-marriage journey of a woman, be it an inter-faith one or a same-faith one, is almost always a story of one-sided adaptation and adjustment. A single day’s token sympathy, as a reward of impending motherhood, may not compensate much.

Now, what are we expected to do? Marginality is not one, but many. Marginalities can be gender-based, sexual, caste-based, creed-based, class-based and they do intersect.  Should our marginality not help us to realize other kinds of marginalities? Is it not the need of the hour, especially under this fascist-patriarchal reign and rein?

For more information on the context: 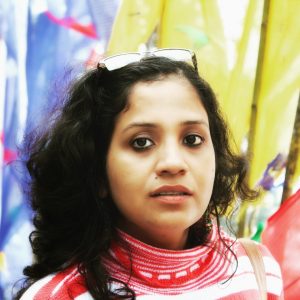 The writer is a feminist, social activist, teacher, and author of a few published books in Bengali: ‘Naribadi Chithi o Onyanyo’ (Feminist Letters and Others),  ‘A-Nandonik Golpo-sonkolon’ (The Unaesthetic).  She is also the editor of a book on Domestic Violence (Khader Dhare Ghar/A Home by the Chasm)