VANCOUVER, British Columbia — During the summer break from her graduate studies in Canada, Rumana Monzur returned home to Dhaka, the capital of Bangladesh, to tell her husband she wanted a divorce. He reacted with leaden silence.

But a few hours later, he strode into the room where she was working on her thesis, locked the door and pinned her down on the bed. Then he dug his fingers into her eyes, blinding her. He also bit off the tip of her nose, and tore flesh from her cheeks and her right arm. 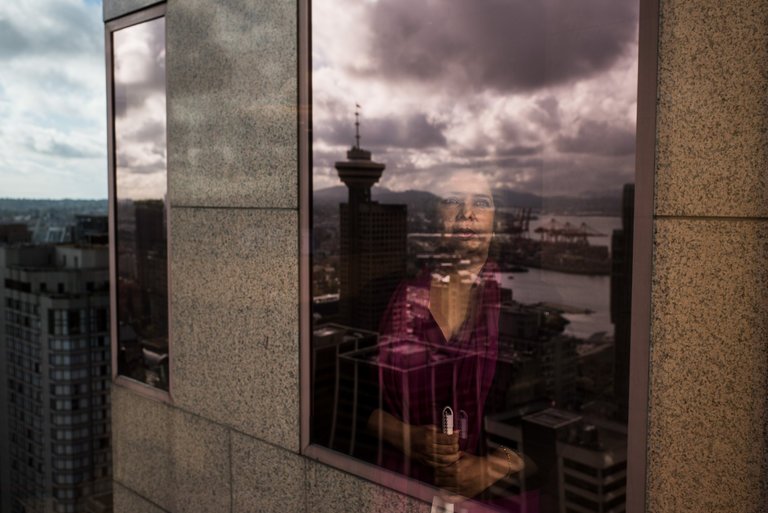 “I won’t let you be someone else’s and I won’t let you study,” she recalled him saying as their terrified 5-year-old daughter tried to pull him off Ms. Monzur’s chest. “He told me in a hissing voice, ‘I wanted to kill you with acid, but good for you, I couldn’t find any.’”

In the days and weeks after, Ms. Monzur endured multiple surgeries and a smear campaign by her husband and his family, who tried to paint her as the aggressor in the attack. Refusing to stay silent, Ms. Monzur demanded justice from her hospital bed.

The savage assault and her outspoken defiance of female victimization made headlines in Bangladesh and Canada, galvanizing public support that prompted the Canadian government to allow Ms. Monzur to immigrate with her daughter and parents in 2011.

And here in Vancouver she again garnered attention in the news media, earning a master’s degree from the University of British Columbia in 2013. This year she graduated from the university’s law school. Today, she is studying for the bar exam while working at DLA Piper, a prominent law firm.

As reports about the abuse of male power have left much of the West reeling, Ms. Monzur’s story underscores the grave perils faced by women in the developing world who dare to challenge men’s authority, and the strength it takes to fight back.

Sitting in a conference room at the law firm high above downtown Vancouver, her sightless eyes concealed by golden contact lenses, Ms. Monzur, 39, recounted how a passion for education drove her to escape her abusive marriage and rebuild her life in Canada.

Ms. Monzur grew up in a moderate Muslim family, the daughter of a retired Bangladeshi army officer who had five sisters, all highly educated.

“My family taught me to be ambitious,” she said. Marriage was not something she had ever thought much about, she said. But she agreed to marry Hasan Syeed, the son of a friend of her father’s, while she was studying international relations at the University of Dhaka.

He began abusing her on their wedding night in 2000, she said, slapping her right after they had moved into his parents’ home. Her offense was asking why he and his family had arrived so late to the ceremony.

In hindsight, Ms. Monzur said, she should have left him immediately, but as a young bride in a conservative culture she blamed herself and chose to endure his beatings rather than face the stigma of divorce.

As she obtained her first master’s degree in Dhaka and became an assistant professor, she suffered quietly when he hit and kicked her, shoved her into furniture and dragged her across the floor by her hair. His parents ignored the abuse or told her to be a good wife and forgive him. “I felt like I was in prison,” she said.

Sometimes he was “normal” toward her, she said, and during one of those brief periods, their daughter was conceived. After she gave birth, however, she moved back in with her parents. She never lived with her husband again, but remained legally married to avoid his wrath and societal opprobrium.

“I didn’t know if I would be able to face society or what kind of stigma my daughter would face,” Ms. Monzur said. “I also thought it was a shame for me. Now I know it’s those people who inflict harm on others who should be ashamed.”

Eager to get away, in 2010, she enrolled in a political science master’s degree program at the University of British Columbia. Life in Vancouver gave her a newfound sense of freedom and with it, the resolve to get a divorce.

“I just loved that I wasn’t with him and could focus on my studies,” she said.

Yet he continued to terrorize her from afar with phone calls, often in the middle of the night, accusing her of infidelity and threatening to take away their daughter.

Ms. Monzur informed her husband their marriage was over while on a visit home in June 2011. He fled the bloody attack after leaving her blinded.

“There was so much internal bleeding in my eyes, it’s a miracle I’m still alive,” she said.

Her family reported the attack to the police, but they were concerned for her reputation if the incident became public. Outraged relatives and colleagues, however, took to social media and encouraged her to speak out. Ms. Monzur, her eyes swollen shut and nose bandaged, described the attack in a television news interview from her hospital bed, the first of several that received international news media coverage.

Supporters held rallies demanding justice, yet she said the publicity also elicited a flood of threats and scorn. When her husband was caught two days later, he accused her of having an affair in Canada and trying to kill him with sleeping pills, while his parents claimed she was pretending to be blind.

After he died of a heart attack while in jail awaiting trial that December, his relatives told journalists Ms. Monzur conspired to have him killed.

By that time, Ms. Monzur had resettled in Vancouver, but was struggling with her disability.

“School was my comfort zone,” she said. University friends helped her to do research and transcribed her successful master’s thesis. Then she announced she wanted to take the law school entrance exam. “Everyone thought it was ridiculous,” she said, smiling. “I’m stubborn, so the best way to make me work is to say, ‘Rumana, you can’t do it.’”

A year after losing her sight, she took the law school exam using magnetic letters and numbers, pipe cleaners and her bangles to answer questions and draw diagrams.

After her first year of law school, she had a summer internship with DLA Piper, which led to a full-time job. Ms. Monzur is aided by software that translates text to speech, allowing her to do the same legal research and litigation any new lawyer must tackle.

“Rumana doesn’t do anything different but she does it differently,” said Mary Ruhl, the firm’s director of professional development. “She makes it seem easy but I know it’s not.”

Still, Ms. Monzur’s blindness presents obstacles. She cannot witness a will, examine photos or sign documents, so in those instances, the firm brings in other lawyers to act as her eyes.

“It was a steep learning curve for us, too,” said Ms. Ruhl, recalling how she told the other lawyers “don’t be shy to give her work.” But the initial wariness vanished as Ms. Monzur proved herself. “Rumana brings a maturity other law students don’t have.”

Ms. Monzur’s tenacity is at the root of her success. She lives with her daughter, who “ doesn’t even remember I’m blind because she sees her mother doing everything everyone else is doing,” she said.

If anything, the trauma she experienced in Bangladesh has only motivated her to defy expectations of what a blind, single woman can do. “In the hospital, everyone was saying, ‘Oh, poor her,’ and I felt like it was the end of my life,” she recalled. “Of course, me being me, I hated that attitude.”

So instead of grieving, she has focused on living. “I want people to see the real me, with a smiling face, not someone who lost her sight and completely lost herself,” she said. “Everyone has challenges. This is mine. Life is a celebration, I still believe that. You just have to make the best use of it.”

(The article is reproduced from New York Times)