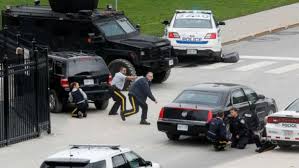 Pamelia Khaled: Breaking news hit TV and other social media since Wednesday morning, and reports from Parliament Hill began to spill out of gunmen inside and outside Parliament in Ottawa. In the evening Prime Minister Stephen Harper addressed in his speech that “this week’s events are a grim reminder that Canada is not immune to the types of terrorist attacks we have seen elsewhere around the world…We are also reminded that attacks on our security personnel and on our institutions of governance are by their very nature attacks on our country, on our values, on our society, on us Canadians as a free and democratic people who embrace human dignity for all. But let there be no misunderstanding: we will not be intimidated. Canada will never be intimidated”.

This is the second time, this week, there has been a brutal and violent attack on our Canadian soil. Last week, Warrant Officer Patrice Vincent, who was killed earlier this week by an (ISIL) the Islamic State of Iraq and the Levant -inspired terrorist. Today, Corporal Nathan Cirillo of the Argyll and Sutherland Highlanders was killed today. Today, Canadians put their thoughts and prayers with the family and friends of Hero, Corporal Nathan Cirillo. He is provided a ceremonial honour guard at Canada’s National War Memorial. All media reporters on the scene and raced to gather information on what was still unfolding.

My question, however arises from the fact that Abu Bakr al-Baghdadi’s claim and call for a new caliphate has gained,  some traction outside of the Syria/Iraq conflict zone. One Pakistani terror group has become the first in the region to break ranks and declare allegiance to the Islamic State. I wonder as the current media of communication is technology how the changes taking place on a global level. Is there any possibility to become the mechanism for the global spread of the ‘New caliphate culture’ across the Islamic world and it could be a challenge to the nation states of the region and West?

My inquiry about the Abu Bakr al-Baghdadi’s self-declared caliphate statement is that it directs to the beginning of a possible appeal and acceptance beyond the Syria, Iraq, Sunni, Arab and  jihadi sphere. ISIS believed to be the first jihadi apostasy, renunciation of a religious or political belief to Islamic State outside of Middle East. Its move emphasizes growing influence of Baghdadi’s self-declared caliphate.

Is this a false notion that ISIS initiated a global nativistic movement, or not? However, this issue need to be dealt with carefully thinking for the people who already are victim of ISIS , future of the global political environment and humanism. According to Ralph Linton, American anthropologist, a nativistic movement is, “Any conscious, organized attempt on the part of a society’s members to survive or perpetuate selected aspects of its culture” (1943: 230). There are four important aspects in this definition: social phenomena; social consciousness; organized movement; selected culture but a culture is not seen as a whole. The idea of a selected culture segregates the group and creates obstacles of ‘sharing concept’. This leads to the nativistic ideas, how to establish the cultural elements such as certain policy, rules, law, costume, norms and values, dietary rules. They may have specific type of faiths, rituals and practices.

I find nativism idea limits to a response of one type of cultural elements, as a defection, to a dominant culture. The concept to global nativism and its possibility of expansion initially seems contradictory as it focuses on one selected culture only. For me, focusing on one culture only limits its (strength  of movement) potential of further expansion to reach at global scale.

However, Islam is a nativist concept or not that must be clear looking at the Linton’s definition. To determine  it as global implies that an Islamist in the Danforth of Toronto is nativist in the same way as an  Islamist in  Malaysia,  Bangladesh  or  ISIS regimes such as Pakistan, Sirya and Iraq, which is not true. As we know, there are differences in views and opinions between Al Queda and the ISIS, while both are involved in terrorism. Are they local or global nativists that complicate the meaning of nativism and their agendas or movements?

Baghdadi declared him as a caliphate but it is important whether this group is recognized and supported by any Islamist group, outside of ISIS or other nativist groups of any part of the world.  Current use of social media, youtube, vdo, facebook  and largely the internet as a technology is  being used to spread the ISIS message. They are using media to recruite supporters, who believe in extreme /radical Islam jihadi movement as an option of Al Quida.

Looking at the Parliament Hill attack in the morning I wonder, does ISIS mission conform to the definition and feature that associated with the Linton’s nativistic movement or not. How we Canadian, North America and Europe would deal with the ISIS and its mission and about what to anticipate and how it should be managed.

Nativistic movement and Islamist group ISIS’s nature remains an unclear concept. It is not clear how other movements and their norms and values and their philosophies can be explained in terms of ISIS. Then, the history of each nativistic movement needs to examine, specially its internal and external dynamics in a holistic manner.  Because each movement has its own principles; thus, it will not be wise to apply them to understand ‘ nativistic movement’  in terms of ISIS particularly. Although there are reports of Christians, Shi’ites and the people of other religion being given the choice: either convert or die. This could be seen as a craze of building a global Islamic state by a vulnerable group, ISIS, who is astray of the key elements of Islamic culture and the essence of Islam. It should not be seen as a type of ‘nativism’  because this group ISIS is not supported by the Islamic culture, or represent 2 billion believers’ of Islam.

ISIS changed the essence of religion word, ‘piety and purity’ declaring a radical idea of establishing an Islamic state across the globe. It is noted that concept of religion is somewhat connected to violence as it condemns values and norms of each other largely. To teach our new generation (to become a ‘whole’ person) a contemplatative education system is required. It can be done employing a clear objective in education that attempts to educate learners’, a concept of ‘humanism’, building a friendlier, healthy environment on this earth. Curricula should combine brain (cognitive/transaction) and soul based approach (transformation). The soul based approach, such as perennial philosophy allows ‘thinking heart’, to large questions: what is our role in the universe; how can we deal with human suffering?

In this global world a group based religion destroys the sanctity in the heterogeneous community. For instance,  Nazi ruler Hitler  and ISIS  leader Baghdadi and their so called ‘holiness’  ideologies, their radical ideas teach and try to  establish a new society, group, and so called Islamic state by killing other groups claiming they are inferior, low caste, non-believer, pagan,  idolatry or polytheism, believe in  different faiths. Because the other groups and their ideas, culture, tradition, religion do not favour some individual’s self proclaiming thoughts and some group’s stricter ideologies.  Their psyche followed by an impulsive idea’ it encourages an individual as if he is divine and received revelation from heaven all at a sudden. Thus, an individual feel empowered and declare him as a new caliphate what ISIS is claiming, submission to him, to his ideology.

Thus, given too much importance using technology and media it might be strengthening the hand of a self-proclaimed caliph. Need to be more sensitive in this case after the case of Osama Bin Laden. However, to avoid harmful mistakes we have to take lessons from both discourses to get the end result of comparative approach: Samuel Huntington’s discourse “The Clash of civilization” and “The Clash of ignorance” of Syed Edward. I don’t see how any ‘nativist’ movement can go global without either entering into alliances or invasions, occupations and subjugations of others. The Ottawa shooting is a call for all rational people on this earth: need to re- think why it is necessary to reject ISIS or any ideas based on fundamentalism and terrorism that is related to religion, and to prevent the spread of any radical ideology by any means.

My point is that by analyzing much of ISIS, at this time, ignoring Abu Bakar is not an option. It is not a simple situation but rather a very complex one. ISIS has a fundamentalist, political and imperialistic dimension that needs to be addressed clearly.  Each elements requires its own solution and each needs to be coordinated with the others. Thus, the ISIS, a complex problem demands a complex analysis and a harmonized informed approach to solve the problems.

Today, we see in some of the news , comments here and there is a very real distinction between what the individual interprets and defines as reality (emic) and how he/she perceives and behaves based on that definition (etic). The emic /etic could be explain where one starts not where one ends. The analysis still attempt to interpret the ‘systems of logic’ that is based on the logics of an insider and it is interactional and motivational.

I find that I am coming around to a critical point of view looking at the Ottawa Parliament Hill attack; this is an attack on Canadian civil liberties certainly. Being a Canadian, not a biblical Samaritan, I propose to observe this issue much carefully, so the outcomes of the investigation can be useful not hostile. So the public, International leaders and Institutions won’t generalize and can avoid harmful mistakes. We have to be alert not making an entire group as a subject for one radical individual and the followers. The institutions must receive correct information for the just goals to combat with any sorts of terrorism, violence and religious issues. This is why, I am concerned of technology; we live in a new era, for the advantage of technology, so called a new messianic social movement and change can take place that may be harmful for global integrity if we do not use technology in favour of peace, solidarity and integrity. Only solidarity can bring social integrity. We Canadian must stay in love and solidarity to one and another, not fear, and be firm to keep our land glorious and free.

The writer is Doctoral Candidate in Curriculum Studies and Teacher Development