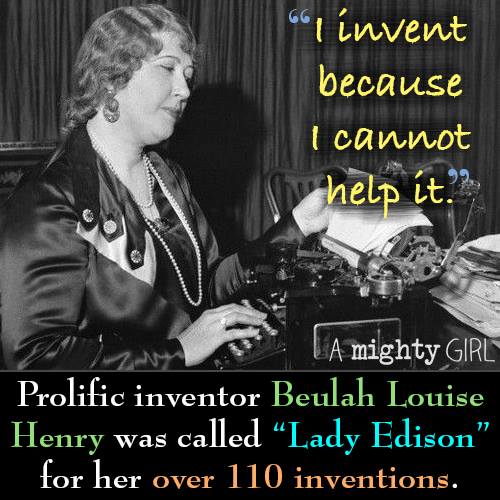 Beulah Louise Henry, one of the most prolific female inventors of the 20th century, was nicknamed “Lady Edison” for her numerous inventions over a remarkable 40-year long career. Born in Raleigh, North Carolina on this day in 1887, Henry is credited with 110 inventions and was the holder of 49 patents. She was also one of the rare female inventors of the period who was able to profit from her inventions and receive credit for her work during her lifetime.

While attending college in North Carolina, she submitted her first patent for a vacuum ice cream freezer in 1912. Early in her career, she focused her attention largely on inventions designed to improve everyday life, including new types of umbrellas, sponges, and parasols. In 1924, she moved to New York and founded two companies to manufacture her inventions, including a variety of children’s toys. By the 1930s and 40s, she shifted her focus to improving machines, particularly typewriters and sewing machines. In 1932, she received a patent for an innovative new typewriter that she called the “protograph”. The machine, pictured here, could produce an original typed document and four copies without the use of carbon paper.

Having established a reputation as a professional inventor, Henry worked for various companies during the 1950s and 60s, designing numerous products ranging from envelope machines to household devices. She passed away in 1973 leaving behind an impressive legacy that was testament to her drive and creativity. Henry, who once said that all one needs for inventing “is time, space and freedom,” was inducted into the National Inventors Hall of Fame in 2006.