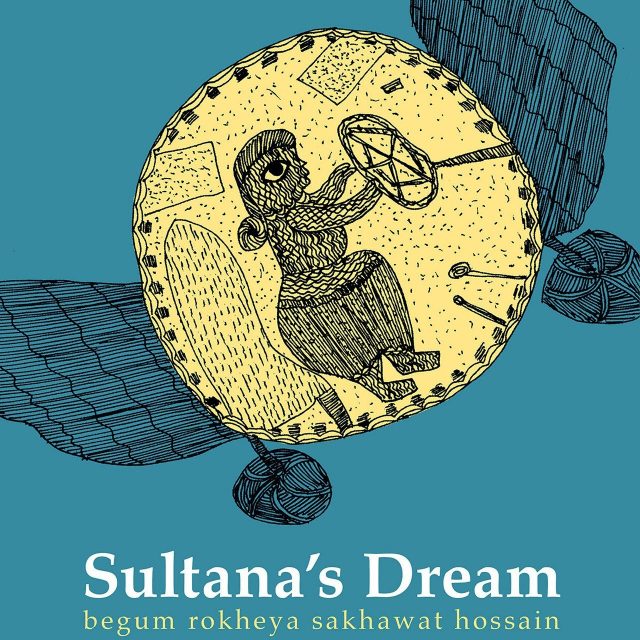 “Sultana’s Dream” is a short story written by Begum Rokeya Sakhawat Hossain and first published in 1905. In the story, Sultana finds herself transported to Ladyland, a country run by women. Sultana comes from our world where it was not unusual for Muslim women to live indoors (i.e. “zenana”) segregated from the rest of the world in the time period that Begum Rokeya was writing. Sultana is predictable, astonished to find herself being able to walk freely on the streets late into the night (freedom that even today’s women have yet to realize) in Ladyland without a veil while it is the men who are expected to remain indoors (i.e. “mardana”). Sultana initially, believes that zenanas protect women until one of the locals of Ladyland provides a compelling reason for why zenanas are illogical: “Men, who do or at least are capable of doing no end of mischief, are let loose and the innocent women shut up in the zenana! How can you trust those untrained men out of doors?” Begum Rokeya uses the conversation in Ladyland to demonstrate that zenanas are sexist and hypocritical technologies for curtailing women’s movements in her time.

As Sultana travels across Ladyland, she learns about how the men ended up in the mardana. For the longest time, the women of Ladyland were often mocked by men and their contributions were not taken seriously. But when war broke out with an enemy land and the men were almost defeated in the battle, it was the women who stepped up and successfully protected the country. The victory enabled women to reverse gender roles where men now live indoors and carried out much of the domestic chores while women ruled the land. Men are an absent presence of Ladyland.  We never see them or hear their opinions on whether they want to continue living in a mardana and they are stereotyped as inferior to the women of Ladyland – a depiction that is hardly a coincidence as it echoes the state of women living in a zenana and to the way men often perceive women in our world.

The way that the women of Ladyland overthrew the enemy and won the war is also significant. Instead of exerting military might as the men had previously done, the women had used technology, which had been developed by women academics. Ladyland is full of scientific inventions developed by women that have resulted in more efficient farming practices, lower pollution, shorter working hours, and a higher standard of living for all. While advocating for women’s education was not unusual in Begum Rokeya’s time, what makes this story unique is that it goes beyond emphasizing the need to educate women in science and technology; instead, it posits a world where women are already at the forefront of innovation. Begum Rokeya envisions leaders who use science for bettering a nation – a refreshing change from many contemporary leaders who denounce science in the name of religion. The utopian nature of Ladyland should not be mistaken for blinkered optimism instead it is a dream that we need to keep striving for until it becomes reality.

Ayantika Mukherjee is a doctoral candidate at the University of Alberta. Her research interests include children’s literature, science and fantasy fiction, travel fiction, women and gender studies, postcolonial theory, literature of the nineteenth century, board games, and print culture. She is also an editor for Feral Feminisms, a peer-reviewed, open access, online journal that engages in feminist studies.