(This was first posted on Ayushi Agarwal’s Facebook profile, and has been reproduced here with her permission.) 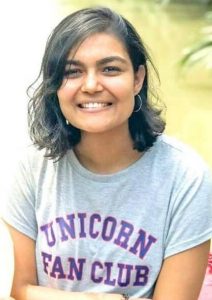 Last night, I travelled from Allahabad to Delhi in an overnight train. When I entered the compartment and reached my berth (a lower berth), I realised that all the berths around me- above me, beside me, opposite me, diagonally opposite me– were filled with male passengers. This made me a little uncomfortable, as it always does, but I told myself that I shouldn’t let paranoia get the better of me. I soon fell asleep.

I woke up suddenly in the middle of the night. The passenger on the berth right above mine (perhaps in his early thirties, who had called me “gudiya” when i was setting up my bed) was sitting on my seat right next to my legs, and I could feel his hand right above my right knee. Though I was aware this was strange, my first instinct was still to try and justify this in favour of the man. “May be he needed support to sit up” “May be kept his hand on my thigh by mistake” “May be he has nodded off”. I opened my eyes slightly and saw that he was wide awake and was watching something on his phone. Just as I began to convince myself that it must have been a careless mistake, his hand began to slide up my thigh. There was no room for doubt. I immediately said “aap kya kar rahe hain(What are you doing)?” in a voice that carried both anger and shock. He said “sorry sorry” and left. I pondered my next course of action for the next two hours. I thought about all the times I’ve been sexually harassed before, and all the times I’ve heard of the same happening to my friends. I thought about the regret I had each time that I didn’t call the harasser out or drag him to the police station.

I set out to look for the TT (the railway officer who checks passengers’ tickets). He listened to me patiently and asked me “aapne tab hi kyu nahi bola? Aapne thappad kyun nahi mara? Ab kya ho sakta hai?(Why didn’t you say earlier? Why didn’t you slap him? Now what can be done?”. A passenger sitting right there, who had overheard the entire conversation, said “aap akeli travel kar rahi hain? Isliye(You are travelling alone? That’s why it happened)”. Thankfully, my dad had told me long back that a few police officers always travel on the train to take care of untoward incidents. I told the TT that I wanted the police to be called.

The police arrived soon and woke up this man. I told him to sit in front of me and tell me how his hand managed to reach my thigh in the middle of the night. His excuse was that he had fallen asleep while sitting on my seat (even though his entire berth was right there) and must have put it there by mistake. This obviously couldn’t be true, since I distinctly remembered that he was watching something on his phone. I told the police that I wanted to file a case. The man started apologising again and again and said stuff like “main married hoon(I am married)” “meri wife ki photo mere phone pe hai( I have my wife’s photo in my mobile)” “mere saath kabhi police ka koi chakkar nahi hua hai(I’ve never been involved in a police matter)” “meri zindagi kharab ho jayegi(my life will be ruined)”. I felt pity and confusion weaken my anger and resolve–the same feelings that have prevented me (and perhaps many other girls) from filing cases many times. I decided that no matter what, I have to see this through to the end. By this time, the other passengers had also started egging me on.

When we arrived at the New Delhi station, the police on the train escorted this man to the police station, and asked me to come along to register the FIR. The process took more than two hours. The police also dropped hints that it would be in my best interests to take the case back. Meanwhile, the man’s family came and started pressurising me to take the case back. They followed me till my car and didn’t let me get inside. In the afternoon, I waited for an hour for the police to arrive with the FIR at Tiz Hazari and then we shuffled from courtroom to courtroom to record my Section 164 statement, which also took about two hours. I was, however, happy to hear the lady Magistrate firmly advise me to not come under pressure from the accused’s family.

This is for every single time that I, and so many of my friends, held our silence due to fear, underconfidence or even pity. This is the one time I didn’t freeze and I’m glad. I just want to say–we, as girls, have an equal right to travel by trains, whether they are overnight or not and whether we are travelling alone or not, and to feel safe while doing so. If such an incident happens, please do not let it go. Immediately approach the TT and ask him to call the police. There is ALWAYS police present on the trains. File a complaint and ask them to take the person in question off the train at the very next station. This shouldn’t be happening, and when it does, we must not let it slide by. #Iwillnotletitgo

Edit: I’m overwhelmed by the support people have shown. I want to take this opportunity to encourage people to share instances where they stood up to their harassers in any way at all; or to recall their emotions during such instances which prevented them from standing up to their harasser, and tell me how they would act differently if same thing happened again; or share stories of having watched someone get harassed and what they would do if they witnessed something like that again. We share and spread stories of harassment (as we should), but what about stories of courage? Let’s inspire each other to stand up to such behaviour. Say #Iwillnotletitgo

Ayushi Agarwal hails from Delhi and recently graduated from National Law School of India University, Bangalore. She is very passionate about women’s rights issues and was the founder of her University’s feminist alliance. She will soon be pursuing further studies in law at Oxford University, where she will be focussing on human rights law and constitutional law.