Adi Chowdhury: Last Sunday, the 30th of October, was probably a regular day for most of us. Our day proceeded as usual, as we left our homes for work or school and returned home tired, only to dine well and drift off to sleep peacefully. On the other side of the story, last Sunday was a day of destruction, horror, intolerance, prejudice, loss of home, and nearly loss of life.For a particular Hindu neighborhood, this day will be remembered with sorrow, grief, tears, and blood. For some, this day was a day emblematic of Bangladesh’s unprecedented and shameful descent into religious intolerance, tearing apart the fabric of the free and pluralistic democracy that this nation was intended to be.

On Sunday, a Hindu neighborhood in Nasirnagar was subjected to ruthless assault at the hands of an angry mob of armed attackers. 15 temples and the homes of more than 100 families came under blow as the mob ransacked and looted the community. 20 people were wounded, including a local priest. According to reports, the attackers“used long, hard sticks and locally made sharp weapons.”

And the charge against the Hindu community? The attackers alleged that a Hindu man had shared an “offensive” and hurtful image on Facebook, propelling local Muslims to take up arms and rally in favor of the death penalty for the Hindu man. Loudspeakers blared anti-Hindu propaganda as the frenzied mob of attackers plundered the neighborhood and left destruction and misery in their wake.

The torment and trauma that has sullied the Hindu community of Bangladesh cannot be understated, nor can it be gratifyingly articulated. One cannot encapsulate or earnestly describe, in mere words, the agony imposed upon these religious minorities and others across the nation. These men, women, and children made no threat of violence to Muslims, nor did they incite any hostility. They could only watch in horror as furious mobs barged into their villages, smashing idols and brandishing knives. They could only attempt to helplessly flee as armed attackers stormed into their homes and upturned their furniture, dragging their residents roughly into the streets and pummeling them relentlessly. The Hindu families found their streets awash with blood and debris, as plunderers stormed the neighborhood and imposed upon their ideologies of intolerance and bloodshed.

It can only be admitted with utter distress and shame that such attacks are not uncommon in today’s Bangladesh. Our modern-day is embroiled in terror—terror of violent retaliation for free speech. Terror of following a religion that is not the primary religion of Bangladesh. Terror of voicing your opinion on “controversial” and sensitive matters. Terror of challenging the predominant dogma, the primary system of thought.

Bangladesh’s constitution ordains it to be a secular state, one that does not favor any one religion over another. It urges its people to maintain reverence for democracy, for equality, for tolerance, for liberalism, for freedom—freedom of thought, speech, and belief. However, sadly, the constitution lies forgotten and abandoned on the ground, trampled and tattered and torn. Our liberal and progressive values have been forgotten and left for dead, shunned in favor of intolerance, prejudice, violence, authoritarianism, religious superiority, fundamentalism, and tribalism.

Today’s Bangladesh is a far cry from its founders’ hopeful vision of a beautiful, peaceful, cooperative, self-sustaining democracy bearing the mark of tolerance and social liberalism—indeed, this country was established in the soaring spirit of freedom, the glorious and inspiring aspiration for tolerance and progress.

Today’s Bangladesh is entwined in a controversy over which religion has authority in his country—a controversy that frankly shouldn’t exist. No religion can claim a higher ground than any other in the free, secular state that Bangladesh was promised. As religious ideologues scramble over each other attempting to claim power, the most important and integral power is lost—the power lying near the heart of democracy—freedom of belief and worship. But as things seem right now, that core value is being snatched away by the filthy hands of fundamentalists who seek to “purify” Bangladesh—but will only end up demolishing it.

The men, women, and children of the poor Hindu neighborhoods are plagued by a virus unlike any we regular people can imagine—the virus of fundamentalism.As a virtually defenseless religious minority, the Hindu community of Bangladesh find themselves entwined in tumescent prejudice and violent discrimination, often manifested in death.

As I am writing this, I find myself comfortable in the safety of my own home, typing away on my laptop in the ambience of my own room, looking forward to a peaceful night of sleep.

On the other side of this nation—not too far away—is a boy my own age. He is residing in a small village home, his heart plagued by perpetual fear. He constantly peers out the window to ensure no angry mob is approaching. He has to take every measure conceivable to conceal his Hindu faith. His heart flutters in fear as he ponders the tentative future of his family and himself. His throat closes up in terror as he envisions the furious attackers barging into their home, seizing his family, dragging them outside, raping his sisters, lashing his father, beating him until he bleeds—until they have embraced death.

This is a very real possibility for a Hindu boy in a Bangladeshi village. This is not only a possibility—it is what has already taken placed extensively across the nation. Families of religious minorities are encumbered with the perpetual fear of acts of intolerance. Fathers and mothers are forced to look over their shoulders, looking out for incoming danger at every turn. Children lead a life of anxiety and consternation, their education and livelihood in threat simply because of their faith.

If we want justice for such atrocities, it isn’t the Bangladeshi government we can look up to. The government has, over and over again, proved to be inefficient, inept, and unjust in delivering justice for cases of religious oppression. Government officials have even perpetuated prejudice against religious minorities by slandering Hindus, referring to them by using pejorative slangs and derogatory terms. The federal authorities have yet to take steps to combat the systematic oppression faced by Hindus and other minorities in everyday Bangladesh. Ironically, such governmental inaction and lack of initiative has furthered worsened conditions for minorities, entrenching them in their plight. 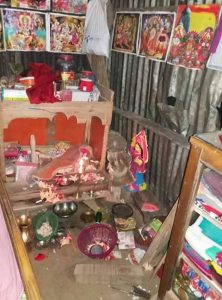 Hence, the most viable solution at the heart of this human rights crisis is to fix ourselves. That’s where the problem comes from in the first place, isn’t it? The dilemma arises from the crooked, toxic mentality of numerous Bangladeshis placing ideologies over humans. This problem comes entirely from children being indoctrinated to believe that Hindus and other minorities are inherently “below” them, less deserving of basic human rights. That’s where any anti-intolerance crusade should begin: at the minds of the citizens. Revolutionizing the way we think about people of different religions. Explaining to them that differences in belief do not equal differences in a human’s worth. Emphasizing that the abuse and subjugation suffered by minorities is an insult to humanity and a threat to the well-being of society. Developing the appreciation for liberal and tolerant thought. Cultivating respect for social equality and reverence for human dignity.

For that is where any social revolution begins: in the minds and hearts of citizens. If the people of Bangladesh make a joint effort to shun prejudice and tribalism, and embrace cooperation and togetherness, great things will happen. Intolerant ideologies will find themselves repudiated and tossed out the window, replaced by peaceful and progressive mentalities. The future of Bangladesh depends only on its Bangladeshis.