“If we don’t help women in Yemen heal from their pain and wounds of war, we will not have a sustainable peace or healthy future generations.”

Misk Al-Junaid is the Executive Director of the Tawakkol Karman Foundation and co-founder of the Women4Yemen Network. The Tawakkol Karman Foundation was established in 2016 by Yemeni Nobel Peace laureate Tawakkol Karman. Misk is a writer, trainer, researcher and human rights activist. In Yemen, Misk worked with several local, national and international organizations on conflict management, democracy-building, women’s rights, and youth integration. She has also worked as a producer and presenter for Belqees TV, an independent broadcaster reporting exclusively on Yemeni news. Misk has a degree in Chemistry from Taiz University in Yemen. She lives in Turkey. 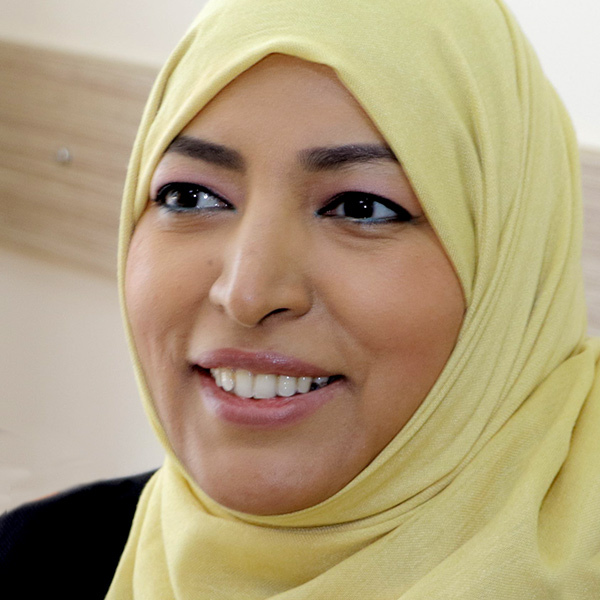 Can we start by you telling me a bit about how you came to be an activist?

I grew up in Saudi Arabia where my father used to work. Saudi Arabia is a patriarchal society. In that country, you could not associate with any men or communicate with men. Women were only to be with women. But during that time, I read a lot. And I asked a lot of questions. I asked: why do women have to live a life of isolation? After high school, I went back to Yemen. My first impression was that Yemen was a more open society for women. But I quickly realized that Yemen is also a patriarchal society. It, initially, felt more progressive, but that was just in comparison to Saudi Arabia. I started to work for women’s rights in Yemen and was at the forefront of that movement. I wrote articles, examined religious texts. I worked to end violence against women. When I decided to remove my head covering, I wrote a newspaper article outlining my reasons. Because of this, Imams [religious leaders] preached against me. They insulted me and accused me of not believing in God. All this because I was working for women’s rights. After my house was destroyed by Arab coalition air strikes, I was forced to leave Yemen. I then became the founding Executive Director for the Tawakkol Karman Foundation here in Turkey.

The Foundation promotes freedom, solidarity, peace and democracy. Can you highlight some current priorities of work?

The Tawakkol Karman Foundation believes that development, in its comprehensive sense, is the real key to sustained peace. Although the Foundation implements many humanitarian relief projects to meet immediate and urgent needs, it is working in parallel on peace-building programs and development programs that focus on education, health and small projects. We mainly target women. We have a project named “Haven for Humanity” which supports more than 40 small projects mostly led by women — women impacted by war, who have lost their jobs and their families. They came up with their own ideas and let us know what is needed for them to them re-start their lives. For example, we support agricultural projects so that women can set up farms in their communities. There are three reasons why we supported this project: One, this project defies stereotypes around fields of work women should engage in. Two, these women were poor and affected by the war. And three, the farms will help the women but also others in their communities.

Yemen is in the midst of a protracted war and is experiencing the world’s worst humanitarian crisis. The Foundation also empowers women to take the lead in building peace. Can you explain why women are central to building peace and why a feminist approach is needed?

The founder of the foundation is a woman [Tawakkol Karman]. Fifty percent of our board members are women, 60% of the executive management are women, and most of the local team in Yemen and the volunteers are women. We believe that we must create a successful model first in order to convince others of it.

During the past two years, we have carried out four international conferences to assess the humanitarian situation in Yemen, and discuss scenarios for ending the war in Yemen. We focus on the suffering of women as the first victims of war, but they are also the first excluded from participating in decision-making, whether during the period of war, in negotiations to end the war, or rebuilding after the war. If we don’t help women in Yemen heal from their pain and wounds of war, we will not have a sustainable peace or healthy future generations.

Can you give some examples of the peace work women are doing for Yemen?

Peacebuilding does not depend only on the political track, but needs to work on multiple tracks that aim at building capacity for women and youth leaders to contribute to the peacemaking process, directly and indirectly — starting from participation in the political process, to negotiations and decision-making and to contributing to reconstruction, and working with people who are impacted by the war.

That is why we have, in the Foundation, three main projects.

Through the “Leaders for the Future” program, young people obtain three diplomas: Democracy, Human Rights and Peace Building; Skills for the Labour Market; and English. More than 1500 young men and women have joined so far.

Through “Haven for Humanity”, we implement our vision of a comprehensive peace. We design most of the activities in order to support women affected by war – displaced women, widows, women with special needs – by transforming them from war-affected people to successful actors in society. We support their small projects and they become models for the other Yemeni women.

A third example is the “Art for Peace” project. This project makes use of the great artistic heritage of Yemen to promote peace and the values ​​of coexistence.

Finally, we also helped establish and support the Women4Yemen Network. Women4Yemen works to secure the involvement of women in negotiations and all peacemaking processes.

How has the work of the Foundation been impacted by COVID-19?

Security challenges, hunger, and the decaying or minimal infrastructure in health and education have many worsening impacts on people. The international community does not seem to understand this situation.  COVID-19 stops normal life in the rest of the world. In Yemen, the war and COVID-19 kill the meaning of life.

Any final thoughts on peace and Yemen?

Peace does not only mean seeking a political agreement to stop the conflict. It means an integrated process that should [include] addressing the effects of war on people and the land. Also, providing the conditions for development, stability, coexistence, and acceptance of the other through a democratic rule that guarantees sustainable peace.