“Many people think that killer robots belong to the world of science fiction. But we need to take action immediately because decisions are being made now that will affect our peace and security very soon.”

Wanda Muñoz is a long-time activist working on humanitarian disarmament, improving the lives of people with disabilities and providing assistance to victims of war.  She is a member of the Human Security Network in Latin America and the Caribbean (SEHLAC) and her current disarmament efforts focus on the Campaign to Stop Killer Robots. Wanda contributed to the development of the victim assistance provisions of the Convention on Cluster Munitions. She also contributed to the development of the Latin American Network of Survivors of Landmines and ERW (Explosive Remnants of War) launched in 2019. Currently, she is researching practices to respond to gender-based violence against women and girls with disabilities through inclusive, intersectional models. Wanda lives in Mexico. 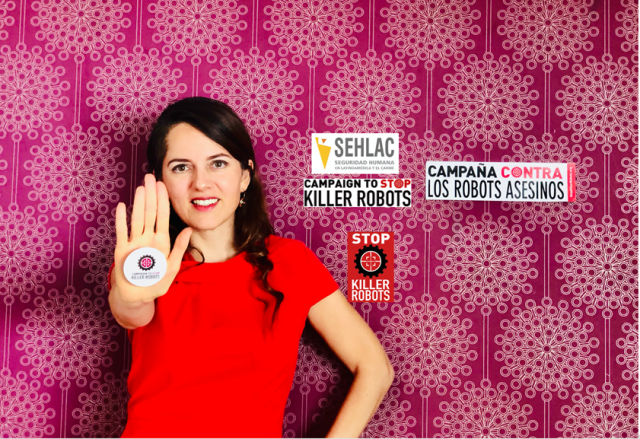 Tell me about your work as an activist.

I started working on the rights of people with disabilities and on providing assistance to victims of war 15 years ago. I was working on projects that were looking at people with disabilities, in particular victims of anti-personnel mines and other explosive weapons, and how we could support them in accessing their human rights. I started working on disarmament because I was seeing that women and children were victims of anti-personnel mines and other explosive devices. They were not combatants, and should not have been injured by these weapons! I also work at the international level to try to stop these weapons from being used. And for that we turned to international humanitarian law.

How are women impacted by anti-personnel mines and other such weapons?

I also focus on gender-based violence because when we started talking with women, and particularly women with disabilities, everything came into place with a gender lens. These women are being discriminated against because they are poor, because they are victims of war, because they have disabilities and because they are women. Men and women have both been victims of mines and have lost limbs and livelihoods, but in addition, women have also then been abandoned by their husbands. The women have medical, psychological and socioeconomic needs and rights that must be addressed, but they are also left alone to raise their children. And Afrodescendent or Indigenous women face even more discrimination.

Can you expand on how you got involved in the Campaign to Stop Killer Robots?

I started by working on the implementation of the Mine Ban Treaty. And then I joined the campaign to ban cluster munitions to make sure that the treaty included comprehensive provisions for assistance to the victims of cluster munitions. Then, I joined the Human Security Network in Latin America and the Caribbean (SEHLAC), which is a member of the Campaign to Stop Killer Robots. Many people think that killer robots belong to the world of science fiction. But we need to take action immediately because decisions are being made now that will affect our peace and security very soon. If we think that this is something from the world of science fiction — well, we will realize that it isn’t when we see killer robots in our countries.

What are killer robots and why should they be banned?

Killer robots are also known as autonomous weapons. These are weapons that can select a target and decide whether or not to attack, without any meaningful human control. Killer robots should be banned for many reasons. First of all, if you take a moral or ethical perspective, it is unacceptable for a machine to decide, basically on its own, whether a person lives or dies. And from the perspective of international humanitarian law, it is impossible to program a machine to respect principles. For example, the principle of proportionality, meaning that an attack needs to be as minimum as possible to achieve its military objective; or the principle of distinction, which says that you cannot attack civilians or civilian infrastructure such as hospitals and schools. These laws that are designed to protect civilians are for humans and not for robots. A robot cannot be expected to follow international humanitarian law: no matter how advanced, a robot cannot understand what it means to take a human life.

What are some of the other reasons you are concerned about killer robots?

With machines, there is a bias based on using facial recognition technology.  There was a recent study by MIT (Massachusetts Institute of Technology) where they found out that facial recognition technology with white men had a 1% error rate. In identifying black men, there was a 19% error rate. And with black women, the error rate went up to 35%. So, we can see that if killer robots are deployed with this or similar technologies, it will have negative impacts on populations that have already been discriminated against.

With killer robots, we mainly think about how they can be used in international conflicts. But once they are developed, in a very short time they can be used for national security ventures. They can be used by a country to police its own citizens and could violate human rights. And we are seeing this already with facial recognition programs being used to target people participating in protests.

Often, when we think about technology, we think that technology is neutral. But it is not. We have to think about who will benefit from it and who will be harmed: Indigenous people, women, those living in poverty. We cannot develop this weapon as it will have an impact on those who have been historically marginalized.

What are the gender-based implications of killer robots? And why is a feminist approach to disarmament needed?

Well, first there is the issue I have already mentioned: the issue of bias. Technology is not neutral. There is systemic discrimination against women and people of colour and against people with disabilities. But beyond that, there is the existence of toxic masculinity and its relationship to weapons. There is this idea that the world needs more weapons. We cannot keep thinking that this is normal. We know that in societies with more weapons, there is more violence against women. The men hold the power and they hold the weapons. And in societies with high rates of violence such as those in Latin America, they will also use this power and the weapons against women.

Has the work on killer robots been impacted by COVID-19?

The pandemic means that people have even less time to think about killer robots. But I think that we need to turn this around and say: look at all the weapons we have, and how they are not helping in the pandemic. These weapons can do nothing to help with the health and quality of life for people around the world. Countries need to invest in more healthcare, in more education; not weapons.