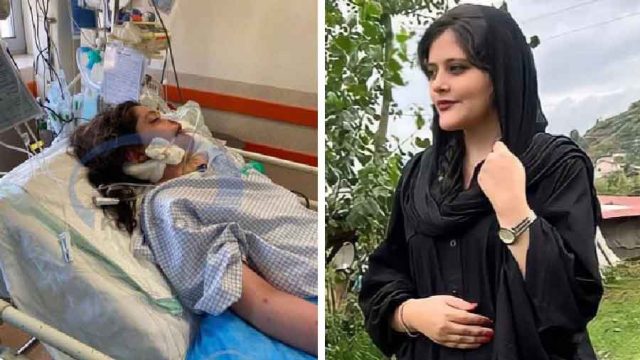 For the past few days, the story of Mahsa  Jina Amini, a 22-year-old woman who was beaten up by the police in Iran and died keeps on recurring.  Or shall I say murder? After all, Mahsa was the victim of a fascist system prevailing in Iran that has curtailed women’s freedom for decades now.  Mahsa’s life story represents countless Iranian women who are not free to choose their clothing.

Every time I speak to an Iranian friend, I am saddened by their stories. I know a few women who fled Iran because they could not be themselves and be safe at the same time. Masha’s story reminded me of an Iranian friend, Mimi who travelled through several countries to somehow reach Europe. She fled from Iran to Turkey and then travelled to Greece. And after a year of wandering through the streets, she made it to Western Europe where she applied for asylum. Many times during her ordeal, her safety was jeopardized.  She gave up her career, she left family members behind in pursuit of freedom. She told me many times, “I could not keep living in that prison.”

As a Bangladeshi, I cannot help but wonder how far-fetched the possibility of “morality police” in Bangladesh is. I never forgot an incident that happened back in 2007 or 2008. I was walking from one tuition place to another. I was wearing a simple kurti with jeans. I was 15 at that time. A traffic police commented, “Everyone looks sexy in jeans.” The road was isolated and we two were the only people in the street. It was clear he made the remark towards me. I was shocked and shaken. I started walking faster, hoping to find a rickshaw so that I could quickly escape from that moron’s gaze. I was not shocked about eve teasing since it is a social problem in Bangladesh prevailing forever. It is difficult to find a woman in Bangladesh who never heard a perverted comment in her life. What shocked me was the fact that a police officer, who is supposed to contribute to maintaining law and order, decided to tease a young girl. This was the day I perhaps started to realize the extent to which law and power can be abused.

A decade later, the situation has worsened a lot more. Only in 2022 itself, we witnessed several incidents in Bangladesh where women were not only publicly shamed for wearing western clothing, but were assaulted too.  Earlier this year, a  policeman had attacked a woman for wearing “Bindi”. Although the constitution of Bangladesh did not criminalize wearing “Bindi”, the policeman had the audacity to attack someone on this basis. In May 2022, a young woman was assaulted in Narsingdi for wearing a western dress. The most horrifying aspect of the incident was that it was initiated by a woman. On social media, women who wear western attire have been bullied for a long time now. Every time I come across a photo of an activist friend or acquaintance on Facebook, wearing a T-shirt or a dress, or anything that’s considered “indecent” in present-day Bangladesh, there are almost always cheap comments from people. The inboxes are worse; often full of sexually explicit messages. Now the violence is no longer limited to cyberspace and happening more than ever in the streets.  What’s next?

While women are protesting on Facebook and uploading their photos in western attires or bindis in solidarity, the reality is that the number of people with a secular mindset is decreasing day by day, and being sidelined by people who are becoming more and more radicalized every day. After the Narsingdi incident, when Marzia Akter Shila, the perpetrator was arrested, Shirin Akter, a female lawyer took up the case to defend Marzia. She expressed her disdain towards the victim on Facebook. She got applauded on social media by a large number of people. If people with such profiles are radicalized it is an alarming sign for our society as they have significant influence and power to justify violence against women for choosing to wear western attires.  We may not have morality police forces yet, but there is mob mentality which is no less dangerous despite not having a legal basis.

Unfortunately for us, most of these people will never be punished since the government is a silent ally in this crisis. While we witnessed solidarity from a few female politicians on some of the recent incidents, the government no longer lives up to the image of a secular democracy. The current regime has already enacted a digital security act in Bangladesh, owing to which, anybody can be arrested and punished for “hurting religious sentiments” or posting “anti-government stuff”.  While the space for freedom of expression is shrinking, radicalization is spreading like a forest fire and the government is busy silencing people and pacifying the Islamist extremists, the possibility that someday a “dress code” will be introduced in Bangladesh no longer feels like a far-fetched fear.

The writer is working as the editor of the Women Chapter’s English site. She has completed an M.A. in Development Studies from the International Institute of Social Studies, the Hague, the Netherlands.  When she is free, she likes to write, travel, dance or make quilled art/crafts.