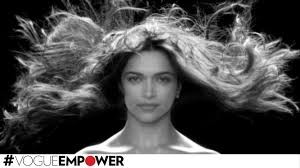 Shilpa Phadke: Since my newsfeed is full of comments on the Vogue My Choice video, I of course, feel compelled to add my two bits.

1. This is an advertisement for Vogue. As advertisements go, it’s not a bad one. We’ve seen many worse. On the other hand, lets not get excited and imagine its about gender equality. (can we stop using the word empower/ment!) I repeat: it’s about selling Vogue.

2. The script is not Deepika Padukone’s. She is a model/ actor in this advertisement – can we please stop praising or maligning her for this ad. Her “coming out” as someone who suffers from clinical depression is laudable. This is an ad that she is acting in. Can we stop blaming her?

3. More than the ad, the reactions on social media concern me – both the over hyped praise about how this video “changes the way you look at the world” (really?); as well as the mockery directed at it by those claiming “my politics is better than yours”. I feel concerned that this ad is being read as feminist. I feel concerned that so many feel the need to rebut the ad with such vehemence without clarifying that what they are speaking to is the hype it has generated not the ad.

4. Yes choices are limited. Choices are about privilege. Yet everyone is making choices. Yes there is size-ism in the video. Yes there is look-ism in the video. Yes all the 99 women in that video looked great by contemporary standards of beauty. Yes it is disingenuous to be pretending to peddle “empower/ment”. Yes of course this is not what gender equity, much less feminism looks like. This is an ad.