In the words of Evelyn Amony: “I was forced to become one of his 27 ‘wives’ ”

Evelyn Amony was abducted by the Ugandan rebel group known as the Lord’s Resistance Army (LRA) when she was only 12 years old. For nearly three decades, this rebel group has committed a range of atrocities including the abduction of children, rape, killing, maiming and sexual slavery. Today Evelyn is Chair of the Women’s Advocacy Network, comprised of over 400 formerly abducted and war-affected women, many of whom are speaking out and effectively advocating for gender justice in Uganda. In her own words, she tells her story… 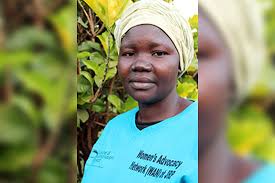 I was abducted by the LRA when I was only 12 years old. One of the really bad things that happen to young girls in the LRA is that they are forced to have sex with the commanders even though they are not ready for such a relationship. I was forced to stay with the LRA leader Joseph Kony [who together with his top commanders is indicted for war crimes and crimes against humanity by the International Criminal Court].

When I was there, I was forced to become one of his 27 “wives”. I gave birth to three children in captivity and the worst thing that happened to me during my 11 years in the LRA was when one of my children went missing in the cross-fire in February 2004. I have searched for my daughter in both Uganda and South Sudan but have been unable to find her and I am unaware of her fate. One year after, during another exchange of fire, I managed to escape with my two other children. Today, I live with my surviving children and have also adopted two of Kony’s other children after their mother died. After I escaped, I stayed at a reception centre and the young children that had lost their mother knew me. When I was about to leave the centre the children started crying and it was painful for me to leave them so I decided to adopt them. Today, I also have two children with my new partner.

Formerly abducted women and their children born in captivity face a lot of stigma and discrimination when we return from captivity. I’m originally from Atiak, a town that was marked by a large massacre.

When I came back, the wife of one of my uncles showed me the graves of all the family members that have been killed.  She looked at me and said, ‘Kony’s children are still moving but our children are all buried’. That made me fear for the security of my children if we were to live in Atiak.