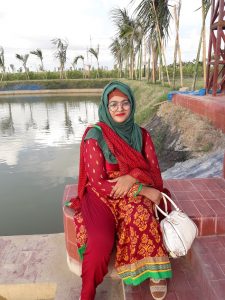 We are living in an era where, nowadays, everyone is conscious of his or her origins and themselves. Postcolonialism deals with the legacy of colonialism and imperialism. That means, it analyzes how the effect of colonialism which is still controlling our lives in this 21st century. On the other hand, feminism is dealing with women’s rights such as to establish and achieve political, economic, personal and social rights for women. We always think of going abroad and settle down there to have a prosperous and graceful future. But living life in abroad is a blessing or a curse?? Or in other words, the people who are living far away from their country, are they really happy there?

In 2013, approximately 45 million immigrants lived in the United States, according to the official website of the Migration Policy Institute. Some of them came as refugees, some migrant workers, some in the purpose of the study, and some in the hope of living the American Dream. The third world people always have a desire to live in the Western Countries who later find themselves fighting for survival each and every day. Immigrants come to improve their fortune and bring along ethics, traditions, cultures, and myths from their origins. That’s why postcolonial identity or diaspora or inferiority complex in a contemporary issue in the literature.

There is a novel by famous Indian writer named Jhumpa Lahiri called The Namesake. The novel focuses on the First generation such as Ashima and Ashok; and the second generation such as Gogol, Sonia and Moushumi, and how they deal with their identity and homeland or birthplace. Ashima is a typical Bengali woman. At first, when we see her in the novel she was giving birth to a child and thinking of her old Indian custom that women used to go home to their parents to give birth, away from husbands and in-laws and household chores. On the other hand, Ashok is different from her, though he has a deep connection to his roots. Ashima’s recollection of the lullaby from the Bengali songs, remembrance of – ‘didi I’m coming’ for ‘goodbye’is intimately connected with the Bengali social conventions which are quite important for the first generation immigrants like Ashima. Her recollection of the past and imagination of the present Calcuttan family life are summarized within the box of the isolated life in the USA. Her feeling of nostalgia captures the very moment of the far away Calcuttan life where a servant is pouring after-dinner tea and arranging Marie biscuits on a tray. I know a lot of people who lived in the U.S.A, and their facebook status makes me thinks of twice to have a better life in abroad. One newly married girl had given a facebook status that she wants her life 1 year back to make things proper because she is no longer in love with the life in abroad which she once dreamt of. Like this lady and all other immigrants, Ashima and Ashoke Ganguly try to create a small flavor of Bengal clutching to their roots and culture in America far from their birthplace and struggling for creating an identity in the land of opportunities and riches. At home and even with friends they speak in Bengali and eat only Bengali dishes with their hands. They find many Bengali friends and try to create their own community there. They also used to throw parties to their friends in order to meet them. They even wait eagerly for such gatherings. They try to restore their traditions in an alien land by preparing Indian food, inviting Brahmin for rituals and so on. An atmosphere of the home is tried to be built up for children and themselves far from their real home. This sense of alienation from the western culture and the land where they live creates a feeling of rootlessness among the children who can neither co-relate with the place where they are born and bred nor to the place to which their parents belong to and about which they are always being told about. I know many families who tried a lot like that but – Does it work yet? I think the answer should be –“No”.

Ashima Ganguli doesn’t say her husband’s name. Ashima never thinks of uttering her husband’s name. Ashima was quite young and well educated that she can get a secured job and choose her life partner on her own. She was also a singer of traditional songs of Indian origins. But the Indian patriarchal society doesn’t let her do that and they are over-anxious to make their daughter get married at the right age. This kind of patriarchal society never let any girls know what kind of a man she is going to get married. Even the girl’s likes or dislikes or even her expectations are not bothered about. Ashima was asked only about whether she was willing to fly on a plane and then if she was capable of living in a city characterized by severe snowy winters and the important part is she will be alone. But Ashima agrees to marry Ashok because she loves his shoes. For me, it’s quite a postcolonial thinking of a simple Indian woman who only marries a guy because he lives in the USA and wears expensive shoes. Another post-colonial issue here I find that the parents of Ashima were quite glad that their daughter can recite the poem Daffodils by William Wordsworth in front of Ashok’s parents. The middle-class people of India as well as in the third world countries think that knowing English Literature can make them more elegant and upgraded. But soon Ashima finds that she is not happy in Cambridge. She feels alien and isolated. Within a short time, she becomes the mother of a child. She feels the emptiness of having her parents and relatives. Ashima becomes sick with misery and nostalgia. Ashima even continues to maintain her Indian identity, she continues to wear saris and sandals from Bata. Feminine sensibility here, was focused on women’s problems and search for identity on a foreign land. In this novel, the first generation immigrants of the early 21st century both male and female, who share one’s history and culture as well as their experiences as an alien in a foreign land. She is portraying as a woman who has accepted her role as a supportive wife in moved countries. Even she is depending on her husband to adjust in a foreign land. Ashima’s daughter who is also an American born second child of her, Sonia and last of all Moushumi, who had gone to the USA for doing her Ph.D. as a geek lady but after a certain time period, she becomes an attractive lady of USA. The common thing of these three women is, their origin lies in the third world country like India but they moved to a first world country like the USA. Ashima, in one hand never leaves her ideal of being an Indian woman and, on the other hand, Moushumi is always seeking a central identity of a first world country, she is thinking that she is a part of the USA, not India. It indicates her denying of her historical identity. Only Sonia, who is not confused about herself, she is well concerned about her diasporic identity which has a transnational center in her host nation. Ashima has an initially hostile reaction to her host country which is rooted in the culturally discursive alien identity.

Things are still the same in our country. Whenever the Bengali middle-class family finds an eligible man who lives in abroad and earning a quite good amount of money, they are eager to get their daughter married to that woman without thinking about the isolated life awaiting her in a foreign country.  It is not considered important enough to give a thought.