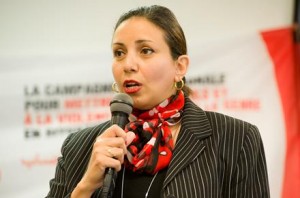 Women Chapter desk: Hania Moheeb has been working to eliminate all kind of violence against women in Egypt. She says, being a woman it is not so easy to work here, one can be assaulted at any time, but she is determined for a better future for women.

She is a seasoned journalist dedicated to ending rape and impunity for sexual violence in Egypt. Hania is herself a survivor of a brutal politically-motivated sexual assault—an experience that catapulted her into the role of outspoken activist.

In January 2013, on the second anniversary of Egypt’s revolution, Hania attended a demonstration in Tahrir Square along with thousands of other Egyptians. Hania was protesting against worsening oppression and gender-based discrimination at the hands of the conservative Muslim Brotherhood government. Her demands for peace were met with violence. A group of men surrounded Hania and proceeded to violate her body in a horrific and well-planned attack that prevented bystanders from intervening. On that night, 19 similar incidents of sexual assault were reported from Tahrir Square. Hania survived, and vowed to seek justice for herself and the countless other women experiencing gender violence in Egypt.

The use of politically-motivated sexual assault against women has gained momentum since the Muslim Brotherhood came to power. Groups of perpetrators systematically attack women participating in public political arenas, such as protests or demonstrations. The acute coordination and pattern of the attacks strongly indicates that they are pre-planned, with the intent to instill fear in women who exercise their political rights. Politicians and the regime have remained silent about the attacks.

Despite the growing risks against outspoken women in Egypt, Hania continues to challenge her country’s deep-rooted patriarchal attitudes. She refuses to be silent about her attack, and has even gone on national television in Egypt to tell her story. Hania looks to the experiences of past female activists in Egypt and draws her strength from their unbreakable determination and hope for a better future.