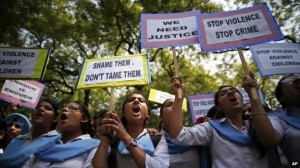 Kevin S. Boiragi and Pamelia Khaled: To the readers, this article does not offer any solution rather analyzes a significant issue and then asks some rudimentary questions. It does not accuse any single media apart from us for being so banal. There is no intention to critic any particular body through our writings. The initiative we have taken to write only to express how disturbed we are and how frustrated we feel regarding the indifference attitude on the girls’ RAPE issue of current social and political system of Bangladesh.

For the past few days we have been out focused for this critical issue: RAPE. News concerning this four letters word has paralysed our thoughts, and we consider the concerned people are also anxious of this heinous crime.  And yet, we are acting as irresponsible and insensitive! The act itself has been instrumental and has become a fundamental issue that requires expedited attention from the society.

Very little discussion about it, we suspect, is currently rolling. Nonetheless, a few bold steps have taken by Marie Sophie Pettersson and Faria Shabnam, and Mahbuba Nasreen on publishing articles on The Daily Star (22 October 2014) and  on Samakal (2 November 2014) respectively are something worth paying attention to. The recent works of Patterson, Shabnam, and Nasreen are commendable. This article, however, does not respond as a follow up of their articles but it borrows the fact Nasreen states: we live in a romanticised society (with the advent of information technology). To a certain extent, it challenges as deniers of the facts concerning rapes and shows media representations victimize the victims further.

We have seen, obnoxious trends continued over the years, as far as we recall: first, there was a trend in commanding Fatwa, through which mostly young girls and adult women were tortured with Dorra (whipped) to death, many people voluntarily took part (only a few protested, most of them kept quiet for a while)- we would name it Fatwa culture . It is important to note that the Fatwa is used on the poor by the rural uneducated local leaders and illiterate clerics of rural mosques largely. Ignoring the Bangladesh constitution and its law, the Fatwa is being implemented often in the name of so called shariah law, which has no significance in authentic Islam and Islamic life and living of Bangladeshis (Khaled, and Dewan, Daily Sun 9 February 2011). This Fatwa culture lasted for a significant period until the social governance acted against this barbaric tradition. By the term ‘social governance’ we mean the governance of the society as a whole that includes but not limits multi stakeholders at the local and state level. Then the trend of throwing acid became vigilant. The acid issue was been watched and taken care of for sometime by the social governance and media; for instance, a strong media role taken by Prothom Alo. The country was managed to tackle this issue in some extent for the time being.

Under the rape culture, we noted down two layers: gang rape, and child rape. We never fell short in contemplating ideas and incidents that take place in India even if they bring disgrace. We do not know how much of the good work we contemplate, but we see there is a connection of contemplating the idea of “gang rape” here: “India Bus Gang Rape” (Nirmala George, Huffingtonpost, 19 December 2012), and in Bangladesh, Manikganj Bus gang rape (The Daily Star 25 January 2013). In 2012, 23 years old student was gang raped in a running bus in Delhi, India. Regrettably to say, it has been two years the criminals did not get punishment yet. After the injunction of new rape law the percentage of rape did not go down; rather, it has been increased. The statistics below indicate in 2012 the total rape case was recorded as 24,923. The next year in 2013 it went up to 33,700.

Since the past several months we have been focusing specifically on the news that covered rape incidents for two reasons: first, we try to impossibly count the sheer number of incidents that have been taking place on a continuous basis throughout the country, and second the language being used in reporting those incidents. Questions we ask, why we have been sitting idle without taking any bold steps in sweeping out this rape culture once and for all from the society? What is stopping us? On an individual level, have we taken this for granted that no matter what rape culture will exist in the society? What is the role of the media here? What are the roles of the media reporters here? Why government and non government organizations are not significantly involved in this issue?

We feel it is important to state our stance of naming this issue as a ‘culture’ because some way we all are fostering this as a splitted issue -a social incident. The act of rape has gain the momentum that travels throughout our minds regardless of the age cohort, the number of incidents have increased albeit the unreported numbers are not known, and people are voluntarily taking part of it.

Why are we so quiet? Don’t we think that it can be our mothers, wives, or daughters facing this tomorrow? We recognize it as a scalar issue- since it is not happening in my family, I am safe. If there is no one coming towards our vocation, werent we suggested to walk alone? We see various groups and political parties lay their interests on the verdicts of war crimes- we ask why? Our friends and our imperturbable minds say, yes, that issue has significance for the true liberation of our country, for the freedom and democracy we all cherish etc. We cannot enjoy our freedom when our mothers and sisters, and daughters are being raped on a regular basis. The definition of ‘Freedom’ loses its essence while our women are not free of men’s insatiable desire of sex.

Another question, why it has to be always women in our society leaving in fears of getting raped, hijacked, dragged under a car, battered mercilessly and killed brutally? There are so called non-government development organizations in the country those take prides as the providers of women empowerment.  There are women leaders in the government as well as in the opposition, and also we have woman speaker in the parliament; however, falsified claims being continuously produced by the administrations regarding women development. They are portraying women microfinance beneficiaries as economically successful women in the country: these women are taking small loans under specific economic development policies; truly our country is progressing with women economic empowerment!

We are not in a state to offer simple safety and security to our women, and we are roaring that we have empowered women in the community. Shall we expect a Fatwa will be summoned on us for this piece of writing “Rape culture: As we name it? Shall we expect our houses being torched? We need to determine how women’s lives are valued, hope not as the fag ends of rope.

Lastly we argue, reporters romanticise the language of reporting as a part of yellow journalism. Their news captions are disgraceful- they imply distasteful, offensive and obnoxious headings and use sensational words to attract mass readers; for example, granddaughter raped by grandfather, sister being raped in front of brother, toddler being raped, father surrendered killing daughter’s rapist. Instead of mobilizing discussion and building societal awareness on such issues, the low category of reporting style victimizes the victims further. We turned the RAPE issue as a culture- the way we see it.  To keep sanity of journalism it is imperative for the RAPE features writers to maintain ethics of writings in the media. Supporting women they could end up with these positive notes: Lets work together against this violence, Stand up against Rape, Say NO, Lets bring accountability to Government, etc., that apprehend engagement with good governance.

Ontario Institute for Studies in Education (OISE, University of Toronto