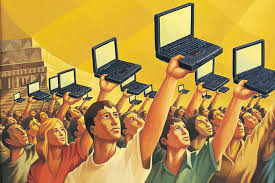 Tania Morshed: Yes, time to time people in Bangladesh have shown this morbid attitude! I have some personal level experience.

More than twenty five years ago when muggers were taking belongings from my Dad and me while holding knives pretty close to both of us, there were so many people looking the “scene” as if it was a shoot out for a movie! Could see the near police box! Nobody even thought of calling, running to police! When we went to the police box I was so angry! I just started asking the duty person, “Didn’t it look suspicious why were there so many people standing in the middle of the road? Didn’t you see the car? etc.” I was very young and didn’t think that there could be more danger by showing anger to police!

Time to time we see this utterly inhuman scenario in Bangladesh! People are surrounding, looking at something horrible happening! Wonder who are these human looking? How do they sleep? Do they know someday they could be the “character” of those scenes?

Within less than a day everything seems to be normal. Read that some concert was held on the next day to the very near spot where Avijit was murdered! Those were educated people! Yes, I know pretty well that education has nothing to do with sensitivity! But people think that when someone gets education that person becomes a bit enlightened! Time to time I am seeimg Bangladeshis’ insensitivity towards fellow beings! I said a lot, wrote a lot about it.

Couple of months ago I found one of my FB friend wrote angry words mentioning Avijit and another blooger after reading their writings! No, that person wasn’t on their friend list. I found out that what I read, like, comment that person followed it, time to time. Thought OK, that person is getting exposed to different views. That person came from a secular parents, atheist uncles, if they were alive would be in their hundreds.

With the highest degree from a University, working to many places, living in this country around twenty five years, made her a religious person from a secular one! Couldn’t take questioning about Islam. But never commented on my writings! That person is a realtive of mine! Another day I found out that that person did similiar thing to another of my friend’s writing! I just unfriended that relative. I wanted to ask, why don’t you argue with me? I write more directly than what my friend wrote! Anyway got to leran again, how intolerant Muslims (the moderate ones, not even the fanatics) towards anyone who talks, writes, questions anything regarding Islam! They forget everything except the urge to ptotect Islam! Even though it says that God will protect Islam! Don’t they even have trust in God regarding this!?

Several years ago someone posted a writing of someone regarding the Florida priest who wanted to burn the Quran. It was an issue at the time. The writer was a Muslim, non Bangladeshi. It was published in a well known newspaper here. It was an era before Facebook. After reading that I gave my opinion. I wrote that the writing was one sided. He didn’t write about the ground zero mosque building issue. That was another thing going on at that time. It was in a local group mailing list of Bangladeshi community here. One person who already heinously attacked me earlier in a different issue, on Bangla culture, (may be will write it someday) attacked me again. Others joined in.

One of them referred to me as “Taslima Nasrin.” Wanted to make a group to make my life hell, praised the guy who slandered me and another lady who echoed me. Their leader (yes they believe in religious leadership, who are like “mollas”!) asked me to prove that slandering happened (because he denied that there was any slandering) otherwise I was a liar. And since I am a liar I am not a Muslim. Even though I heard that from a different issue in different time that he publicly lied whie touching Quran! And he was a molla of the community!

I asked someone to verify the e-mails from a lawyer if there was any slandering done according to the laws of this state. No wonder one of the highest law person of the state underlined the lines! I just sent those lines. The molla said, “OK we are done here.” I wrote one of the attackers who labeled me as Taslima Nasrin, I live in a country where everybody has equal rights to say something. He can only preach his thoughts to his own family members. How dare he expects that no woman can raise their voice. Also said why do you live in this country? If you can’t take the rights of women why don’t you go to those countries where women has no voice etc. Yes, only me was standing beside me! Not a single human being said publicly anything!

Even though some, including hijabi women, said privately  they were with me. Just one lady wrote that she didn’t find anything against Islam, she is also hijabi. Everyone wants to stay in the so called “comfort zone!” Someday they will know it was made of glasses!

Today had a long, long talk with someone who is way younger than me. She is kind of hopeful that justice will be done. Not me! I said to her that you know how much BUET alumni are each for other. (Both of our spouses, brothers are that. We live in a society that many forget that there are others than them!) Anyway I asked her did you see any group of BUET people said something? We have seen regarding other issues they raised, tried to raise their voices together. In this community I also am seeing nothing! Wonder how can I still expect! I told her, if Avijit didn’t have the tag of “atheist” you could see something!

And more harshly, if his last name was not “Roy”  but any Muslim name and not an atheist of course, you would see some more reaction! She asked me to be a little bit “diplomatic” about how I say things, write! Because like my some good friends said, I am too straight forward. If I was a public figure (more people knew my writings, or I was in Bangladesh I would be in real trouble!) Now hours later I am writing this! I said, if Avijit wasn’t atheist, you would see people claiming his body and screaming, “He belongs to us!”