Nowadays Bangladesh following the rule of king Dhritarashtra of Mahabharat. There is a fact that Queen Gandhari has willingly accepted her won blindness causes her husband was born blind. So, showing the loyalty to her husband and the customs of the state, she did it. She did not though the forwarded site of the story. She never thought of the indignity of future women. She could not allege even the unimaginable that the dignity of women will be violated due to her unconditioned inferior loyalty. Throughout the eternities, the patriarchal state system has taken on the role of mythical king Dhritarashtra of Mahabharat. And our present independent sovereign state Bangladesh plays the role of Queen Gandhari. The state has blindfolded itself. And under the shadow of the flag-bearing masculinity. Cover the eyes to the colorful handkerchief of development. Like Gandhari and state is a lame flattering spider with it. Women are like a joke of society. When half of the population of a people in this republic is a woman, the state system has consciously subjugated women like a blind dictator.

The major role of the state is changing the patriarchal contempt mentality of the society. The rule of law and administration of the state can bring about a positive change in the course of social change if desired. If the state wants, it can turn the misconduct of the masses into good conduct. All that is needed is the goodwill of the state. However, in a semi-educated democratic country like ours, the vote hunter’s mentality very poor so that they don’t want to take a challenge to change the system.

At present, it seems like a festival of rape all around the country. Day by day the situation is becoming more horrific, more frightening, more miserable, more ruthless, and more painful. Enough is enough. This time the law has to be changed, the constitution has to be amended, the hostile mentality of the administration has to be changed, from inside and outside. Women need to come out from the fragmentation of the state, socially and individual life. The state has to take that responsibility.

The cries of women victims of violence are becoming louder day by day. The rapist men are always looking for new and horrible ways to deprive women of their rights and dignity. The state at that time played the role of Dhritarashtra in the Mahabharat. And the political party that is in power plays the role of Queen Gandhari.

From the middle of September 2020, onwards, a series of incidents of brutal violence against women began to erupt, and the conscious citizens of this country women and men started protesting.  They came out on the streets and started a movement. Student women, housewives, working women all started strengthening the movement from different positions. Following this, the movement started in other districts of the country as well. Without political idents, this movement perhaps the biggest partnership movement in the country. considering this movement, the government announced to pass the law of death penalty, within around one and a half weeks. which is the maximum punishment for rapists.

“Man keep your eyes under your control, day or night.” No one has ever made such a big social threat in the history of Bangladesh through the women’s movement. And with threats, the relatively young women of this country came out on the streets with hundreds of torches in the middle of the night without any political banner, taking a position in front of the Jatiya Sangsad Bhaban itself. The movement has given two messages to the government and society. One, we broke the shackles of the socially determined evening law at midnight. And two, we went to the Parliament House where the highest decision is taken to run the state. Symbolically, we broke the culture of not letting women out in the middle of the night. And the state is obliged to provide security to women. We are the citizens of the state. We want to get rights and the dignity of our citizenship.

This movement will be more formidable in the future and this illuminated torch night will go down in history as a shining milestone. Have the guardians of Bangladeshi families ever imagined that thousands of women would come out in the middle of the night like this at the owing of their rights, to demand their own protection for getting free from Torture and cruel culture, that is the lesson of history.

I thank myself for thinking that in the light of thousands of torches, I too was a witness of time and a tiny star. Undoubtedly, this protest will become a golden feather in the fight for women’s rights in the future and will go down in history with the feathers of innumerable successes.

The government of this country, which has deviated from the norm, has realized that it is not possible to go far by tying a silver handkerchief in the eyes of a woman. The October movement has conveyed that message to the rulers. The security of women must be given, and all discrimination against women must be eliminated. Women must be given the right to property, the right to guardianship, the equal right to testify. Women need to enjoy and share it equally. The state must come to the conclusion in 2020 that it is a collective body of all men and women. So, all men and women are equal in terms of law, benefits, and opportunities. Here we have to stop dancing the tail of religion. All citizens will be equal in the eyes of the state. The days of patriarchal state management must be ended by capitalizing on the gender symbol.

As a matter of urgency, it seems that it will not be easy for those who once took to the streets to be deprived of their rights and chained back home. 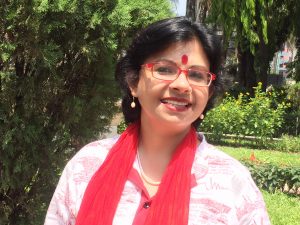 N. R. Musfika Laiju is a Gender Specialist based in Bangladesh, with over 20 years of experience in management, coordination, planning, and program implementations. Ms. Laiju is the Editor of a news portal named Womens Windows, the first women sport’s news portal in Bangladesh.