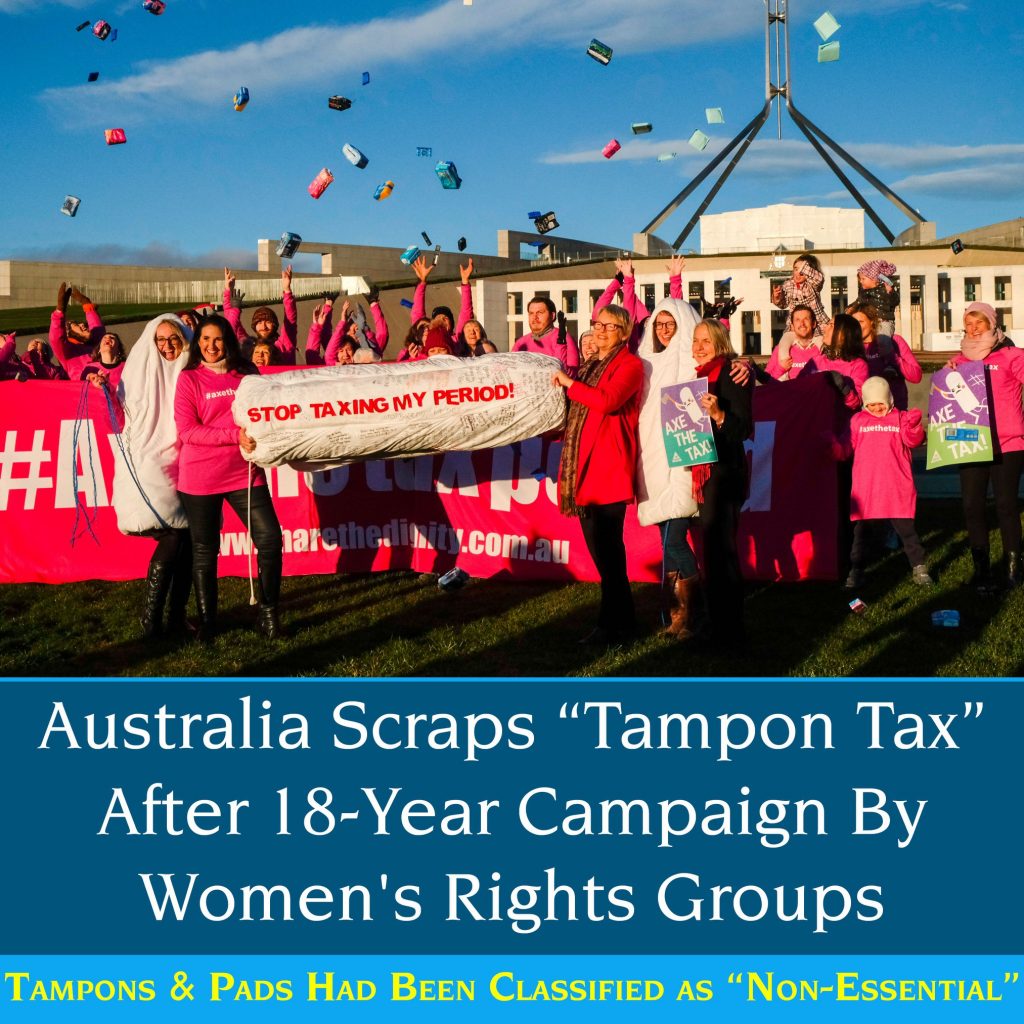 After 18 years of campaigning by women’s rights groups, the Australian government has voted to remove a 10% tax from menstrual products! The tax has been applied to all “non-essential items” since it was implemented in 2000, and tampons and pads were included in the non-essential list even though products like sunscreen, condoms, Viagra, and nicotine patches were exempt from the tax. This week, both federal and state governments voted to eliminate the tax on menstrual products starting on January 1st. “We’re really delighted that everyone’s come on board to scrap what is an unfair tax,” says Minister for Women Kelly O’Dwyer. “Millions of women right across the nation will be very thankful for it.”

The decision to exclude menstrual products from the health goods tax exception was controversial from the beginning, with women’s rights activists arguing that tampons and pads are essential health products. At the time it was passed, then Health Minister Michael Wooldridge defended the decision by saying, “As a bloke, I’d like shaving cream exempt but I’m not expecting it to be.” Over time, more and more groups joined the call for the tax to be removed. One of them, Share the Dignity, a charity devoted to helping homeless and low-income women gain access to sanitary products, gathered over 100,000 signatures on their petition to remove the tax earlier this year. “I don’t think it’s even about the money. It’s about equality,” says Share the Dignity founder Rochelle Courtenay. “Why are condoms, lubricants and nicotine patches all untaxed, yet female items that we don’t have a choice in are taxed?”

Across the country, women were thrilled by the bill’s passage, which was first proposed by Greens Senator Janet Rice who argued that the tax was tantamount to a tax on women. After the victory, Courtenay wrote that “the final roar of celebration that went up Wednesday morning was really from… not just those [who] won the war today, but also those who came before us.” She also reminded supporters that the fight to ensure all women have access to menstrual products continues: “The removal of the [tax] on our sanitary items was simply righting a wrong… [T]he fight is not over, and will not be until period poverty in this country is eliminated, because dignity is a right that everyone deserves.”

Congratulations to everyone in Australia who fought long and hard for this victory!

Reproduced from “A Mighty Girl”