This country and its people do not deserve this Black Hole scene, Al Jazeera documentary, that was published on February 1, 2021. The investigation reveals how a criminal gang colludes with Bangladesh’s security forces and profiting from PM Sheikh Hasina links. However, Bangladesh’s most of the newspapers reported that the current government denied the facts Al Jazeera published. 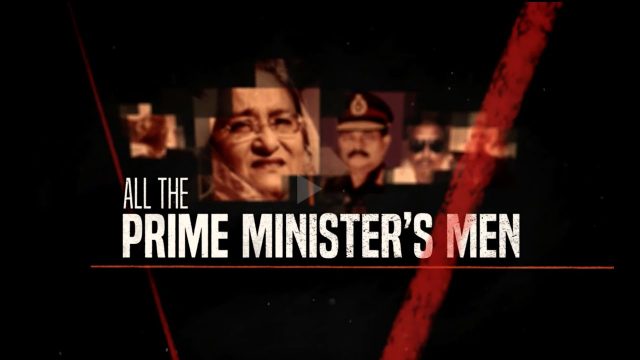 The current administration is known for abduction, killing, and harassment. In this country, three types of violence are occurring on a daily basis, social, political, and economic.  This was my personal experience; in 2017, when I went to Bangladesh after a decade, I was shocked to learn that one of our family friends, an ex-Ambassador, was abducted while he went to the airport to receive his daughter for an unknown reason. He returned home after several months. But he did not reveal anything, who did what to him. He could not speak out as his mouth was shut by those influential people forever. His siblings and his daughter moved abroad to save their lives. This is only one story of abduction policy is being taken to harassing oppositions, but many stories have fallen during her regime.

I proposed earlier in one of my articles to the country leader to amend the constitution to revive Secularism and move forward, not bowing down to fundamentalists who are engaged in killing science writers, science bloggers, science educators, science believers, free thinkers, atheists, people of other genders, Non- Muslims, foreigners, and oppositions. Supporting a dark group and gagsters,  the PM cannot hold her throne for long.

Furthermore, the current government is sojourning too long in the leadership position without people’s votes. A leader is respected only when they stay in power with people’s votes. What she did is called Oligarchy, when a government runs administration by the few only, incredibly absolute power, which a small and privileged group exercises for corrupt or selfish purposes.

Looking at the role of Dhaka University, Dhaka Medical College,  BUET, and other public institutions, I feel sorry to say, those renowned institutions lost their image. The institutions are not producing enough intellectuals, researchers, and scientists; instead, half-educated individuals, corrupted nations, and gangsters. Because students and teachers are involved in politics, they are not engaged in learning and teaching.

A country does not mirror the number of GDPs, new buildings, roads, and bridges; it glows when its nations are educated enough and behave well. If they are not well mannered and do not love and respect others, they are not good citizens. If a highly regarded organization like the Bangladesh Army behaves irrationally, I wonder how other organizations could.

The leader of Bangladesh must rethink what she is supposed to do now after the Al Jazeera documentary. Defaming Al Jazeera and denying all these stories is not enough to shield her backbone and maintain her self-esteem. Even Trump, the ex-president of the USA could not hold his position for long for his unimpressive and unamerican act.

If we look at the history of the Maratha invasions in Bengal (1741-1751), on the Bengal Sultanate’s people, we can see how its leaders always proved they are strong enough to stand up against irrational acts and turn down any tyrannical people, like Marathas. From 1741 to 1751, the Marathas under Raghuji Bhonsle invaded Bengal six times. These invasions caused heavy destruction in Bengal; however, each of the invasions was resisted by the armies under Nawab Alivardi Khan. Nevertheless, the ceaseless battle took a heavy toll on the population of Bengal. The Marathas, the Borgis killed 400,000 Bengalis; it was the biggest Bengali genocide in Indian history. These brave Bengalis thrived under the good rulers even the Marthas hit hard on them. So, Bengalis know what they are supposed to do when they are pushed under the rugs.

So, the current country leader can take another attempt to stand up in front of the camera and speak to her people about what she is thinking now about the Chief of the Army and his brothers, the perpetrators. PM can also try to listen to her people and learn their pains and pleasure to show her reverence and align her steps with the commoners.

She can take drastic actions to put down those who supported these heinous acts and bring back the fame of the Bangladesh Army’s top position by handing it over to the right person. The country does not want to see the corrupted people at the top of any organization.  Why it is taking so long, it should not take more than 24 hours to get rid of those harmful Chief of the Army who did not think of his motherland and his people to whom he is committed.

We need personalities like General Manekshaw or Lieutenant General Jack Farj Rafael Jacob, who helped Bangladesh win during the Liberation War 1971, not a corrupted individual engaged in nepotism and ready to sell Bangladesh.

An explosive investigation reveals how a criminal gang is colluding with the security forces of Bangladesh and has links to Prime Minister Sheikh Hasina. Undercover reporters with the I-Unit expose how a former street mafia claims to have captured a state. The brother of Bangladesh’s army chief boasts that he can use police and paramilitary units to abduct rivals and earn millions in bribes. Documents obtained by the I-Unit also show that the head of the army has helped a convicted killer evade justice. And how the country’s military intelligence service has secretly bought spyware from Israel – a country that Bangladesh does not recognize – that can monitor the prime minister’s political rivals.

The writer is a Doctoral Candidate working on peace and conflict resolution through science at Curriculum Studies and teacher, Development department, Ontario Institute for Studies in Education (OISE), Teaching Assistant, Sociology Department.