Tribhanga : Tedhi Medhi Crazy is a Netflix original film that premiered in January 2021 and acclaimed critics’ appreciation. It tells us the story of three generations of women- Nayantara, Anuradha, and Masha. Despite living in three different times, each of their stories clashes with the notions of patriarchy and societal outcomes. Nayantara-Anuradha and their complex mother-daughter relationship is the main essence of the film. In the later part, the love-filled relationship between Anuradha and Masha gradually becomes poignant. In that sense, Tribhanga is the story of struggles, sacrifices, and some imperfect choices of motherhood. 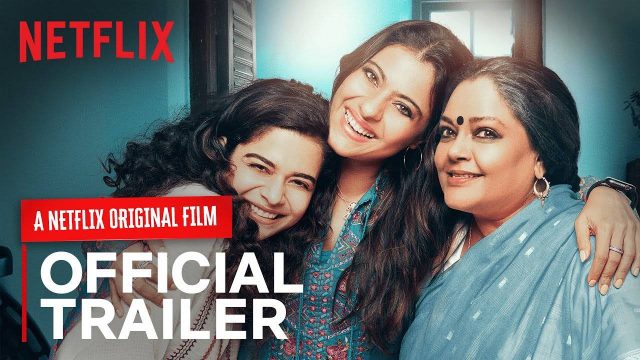 The story of Nayantara, a prominent writer revolves around the hardships of becoming a writer. Her mother-in-law is not very supportive of the idea that her only son’s wife is giving her heart and soul to writing and ignoring her domestic duties that every traditional housewife is supposed to perform. Out of frustration, Nayantara leaves her husband’s house with her two children and at this point, her real struggle as a single mother and a rising writer starts. She manages to put all her efforts into writing. In the meantime, her children, Anuradha and Robindro, start growing up. She fights all the odds of society to raise her children and give them her name instead of their father’s. But motherhood can be very difficult and challenging too. She fails to look after her daughter during the most sensitive period of a girl’s life- teenage. She gets married to a photographer who turns out to be a sexual predator. He harasses Anuradha without giving Nayantara any clue. Anuradha also never speaks up to her mother because of the invisible distance created between them. Nayantara even fails to notice that her children are regularly bullied in the school because of the choices she made. She only realizes that something is wrong when Anuradha attempts suicide out of depression. This part clearly shows us the importance of a friendly mother-children relationship from a young age.

Anuradha is a famous actor and Odissi dancer. She is stubborn and straightforward. Despite experiencing sexual harassment and a tough childhood, she grows up to be a strong woman. She fights abuse from her partner and decides to raise her only daughter, Masha all by herself. She tries to give Masha all the freedom she once aspired to achieve. Years of neglect and hardships made her rude. She hates her mother and doesn’t like to call her ‘Aai’ (mother) anymore. But can Anuradha ignore all the efforts her mother invested in her?

Masha, the daughter of Anuradha and the grand-daughter of Nayantara grows up to be a simple and easy-going girl, unlike her bold mother and grandmother. She shares a lovely relationship with her mother. She is married in a conventional Indian family where women follow every traditional gesture and posture. It is her choice to stay in a household like this. She was brought up in a lonely family but now she is living with her relatives in happiness. Masha’s life seems very unproblematic at first glance. Deep inside, she has her pains too. Growing up without a father or having a celebrity mother did have some negative impact on her. She misses the love of a happy family. That’s why she is so excited to visit her Grandfather for the first time. Ultimately, she wants her unborn child to have a proper family and affection which she missed during her upbringing.

The story is told from the perspective of Milan, the man who helps Nayantara in writing her autobiography. In the book, Nayantara expresses her grief as a mother and her failure to give her children enough time. When Anuradha learns about that, Nayantara falls into a coma. In a scene, Anuradha symbolizes the life stories of these three women with special reference to Odissi dance stances to Milan. This is probably the most eccentric moment of the movie. She tells that Nayantara is ‘Abhanga’- an ambitious woman who has her imperfections too and Masha is ‘Sambhanga’- who perfectly balances her life in a simple manner. Anuradha symbolizes herself as ‘Tribhanga’- an oddly rebellious woman who overcomes all her fears and dark episodes to rise like a phoenix out of the ashes. Milan shares the video clips of Nayantara he made for the autobiography to Anuradha. It brings out the hidden realities of the mother-daughter duo and uncovers the strength of a mother’s love.

Tribhanga does not question the feminist moves or faults in motherhood. It depicts the life struggles of single mothers and the impacts of broken families on children. It shows us even after so many decades of women empowerment, absolute freedom and healthy life cannot be ensured for working women in our society. There is still a tendency for women to either give up domestic duties or future aspirations. And these choices have life-changing effects on the children who as a consequence have to suffer in the long run. Maybe we can blame Nayantara or Anuradha for not living up to the expectations of their daughters. But we have to understand in what situations they had to make those decisions. Neither Nayantara nor Anuradha was blessed with a normal life. They had to fight their demons alone in a selfish male-centered world. It is not easy to raise children in such a judgmental society alone. The regret we see in Nayantara or Anuradha is the ultimate result of growing up in a conventional unkind society. A society that fails to provide everyone the same freedom and opportunities. Being rebellious in such a society is not a choice or option but a necessity.

The movie ends with the demise of Nayantara in a tragic way and the realization of Anuradha that her mother was not a self-centered woman but a brave mother. It leaves an incomplete feeling in our hearts by opening so many possibilities of “what if’s”. Sophistically directed by Renuka Sahane and flawlessly acted by Kajol, Tanvi Azmi, and Mithila Palkar, Tribhanga is different from all other Netflix movies made in recent times. Anyone can watch it with his/her mother, daughter, or full family to uncover the bright and dark sides of struggling motherhood.