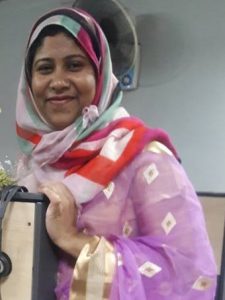 “While reviewing one of my research reports my supervisor was discussing with me that the findings we got were already discovered 20/25 years ago. He asked the team whether any new issues were found.  The report was on unfolding the factors behind maternal mortality and morbidity. I went through some of the previous relevant reports and found the authenticity of his comment. The factors are almost it’s better to say absolutely similar that impedes the improvement in the maternal health situation.”

A mother is always unparallel to her children. We the people who eagerly wait for a data and implement different projects might be happy in the reduction in maternal mortality rate, however, death of a single mother should not be acceptable. Because the children who lose their mother, it is hundred percent lose for them-although still 173/100,000 mothers are dying for different reasons. Reduction in maternal mortality is not any consolation to them. Apparently, all possible efforts were given to tackle the maternal death and health-related issues by the government, donor agencies, and also by local and international bodies. However, can we really change the underlying factors of maternal sufferings which sometimes lead them to death even? If we look at the key issues related to mother’s health during pregnancy, childbirth and the postpartum period, will we really find any difference the practice between today and 25 years ago? Discrimination in availing health services is still a big eliminating factor in the society to ensure better maternal health. A woman never has time for her own. After bearing all the responsibilities to all the members of the family, she finds no time for her at the end- of the day. Unfortunately, she is ignored and overlooked by the family members as well. We all know this factor by practice, by seeing our families and families surrounding us. Above all, we are getting the same from different research studies. The issues are an open secret to all however still they are experienced and faced by the women.

Let me discuss some key factors.

ANC during pregnancy is a prerequisite to save the mothers and babies and it is suggested to take at least 4 ANCs. We see the improved trend in statistics where the rate of receiving four or more ANC increased from 26 percent in 2011 to 31 percent in 2014. Can we be happy with this figure? Let us look at the empty part of the glass full half with water. What in case of another sixty-nine percent of the mothers?  A large proportion of the family members, the elderly members in particular still believe that pregnancy is a natural process and no extra care is needed. They did not need it and similarly, their next generations do not need them. Therefore, the family member who was supposed to play the catalyst role to save the mother, consciously or unconsciously they are harming both the mothers and babies. Is it really a new thing?

Taking Iron or vitamin Supplement during entire pregnancy to combat anemia is recommended. Can we imagine still the pregnant women are hindered to take the full course? What is their logic? The child in the womb would get bigger and the delivery could be complicated. This was believed in 25 years ago and still, it is believed. Can we tell it a new thing?

Taking proper rest and not to do heavy work is a very rare thing that pregnant women can maintain. In many families still, the pregnant women are doing the works like carrying water, rice grinding, carrying the babies if have any and so on. No mercy is shown to them if they want to sleep at the daytime. Is this scenario is new?

Taking extra food is required for maintaining a healthy pregnancy but this is very much ridiculous to some pregnant women where managing three meals is a struggle for them. Being a female family member, even a pregnant woman thinks of giving the extra food to the males, babies or elderly persons. Is this scenario seems new?

The issues mentioned above are some example only. There are more issues like physical violence to women, taking birth preparation, place of delivery etc that still remains same as the previous years. The findings are obtained from different studies over the years and they are remaining unresolved for which we are getting these issues even in the year 2017!Every time we are unfolding the same thing, discussing them and keeping them filed for further discussion.

Let me share a story. Shahna works at a private company for last five years and she took part in different planning and strategic meetings there. Every time the employees were asked to suggest some ways how to ensure a better working environment for the mothers. All the employees give their suggestions, they are recorded and filed. Next year same thing happen to them. Shahana never saw any implication of the suggestions although year after year the employees giving almost same suggestions.

I told the story because if we do not act properly to address the issues that were discovered 25 years ago that will ultimately be carrying forward in next hundred years. The MDG target was to reduce maternal mortality to 143/100,00 by 2015. Sometimes I think how unfortunate these 143 mothers are! We are consciously allowing them to die. We would be very happy if only 143 mothers die, not more than that.

Can we really do it?

The writer is working at The Nielsen Company Bangladesh Limited, a research-based Multinational Company.