Rafida Bonya Ahmed: On the morning of February 26, as I was mourning the loss of my husband last year, I was left wondering something else: Whose death anniversary will I mourn next?

A year ago on Thursday, secular blogger Ananta Bijoy Das was attacked and killed on his way to work in northeastern Bangladesh. That attack came after one on me and my husband by a group of machete wielding Islamic militants at a crowded book fair. I sustained four stab wounds to my head and I lost my left thumb. My husband Avijit wasn’t so fortunate. He died in the hospital from the wounds he suffered in the attack.

Ananta, a fellow writer who used to call me his sister, started blogging with us right after he started college. He was only a few hundred yards from his home when assailants hacked him to death. Another blogger washacked to death in his own apartment. Sadly, the fundamentalists have also targeted Avijit’s publishers, slaughtering one in his office. Another barely escaped.
Our crimes? Avijit founded the online platform Muktomona to promote science, philosophy, rationalism and free thinking in Bengali. Avijit wrote and edited 10 books, on topics ranging from the origins of life, to the science behind homosexuality, to the origin of the universe from zero. I wrote a book on the evolution of life. And Ananta published a magazine called “Reason” and wrote books on philosophy and science. Yes, we were openly critical of Islam, but we criticized all religions from a rationalist and scientific point of view. 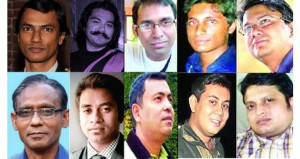 You would think the Bangladeshi government would be outraged at these crimes, committed on the country’s soil. Instead, it remained largely silent as the killing spree continued. And while this supposedly secular and democratic government did eventually speak out, after the fourth victim was killed, the criticism of the killings was undercut as it shamelessly blamed the victims and warned against writing anything that could potentially hurt religious feelings.
Sadly, not only have the authorities in this country failed to ensure justice for any of the killers, but arrests also have been few. Indeed, none of the suspected and identified killers in our case have been detained. (This doesn’t mean the authorities haven’t been busy. They have been arresting bloggers, writers and publishers under the guise of “semi-blasphemy” laws, suggesting their writings were intended to offend religion).
We are now seeing the inevitable results of encouraging a culture of impunity in society.
The systematic pattern of assassinations and attacks has extended from atheist bloggers to Shiite, Hindu or Christian minority groups, foreign nationals, university professors, and the editor of the first homosexual magazine in the country. Al Qaeda in the Indian Subcontinent and ISIS have been claiming responsibility for these slayings. ISIS, meanwhile, has featured Bangladesh in its magazine Dabiq multiple times.
The government’s response has been unbelievable. The home minister said part of the investigation into one blogger’s death would involve seeing “whether the blogger has written anything objectionable in his blogs.” He also declared that homosexuality was not supported by Bengali culture after the killing of two gay rights activists in their own apartment. The prime minister said she would not put up with any criticism of religion. To our surprise, we watched the U.S. ambassador to Bangladesh praise the government for fighting terrorism even as she asked the government to speak out.
The truth is that the progressive secular community and minorities of all sorts in Bangladesh now don’t just have to fear Islamic militants — we must also fear our own government, which shows no regard for its secular beginnings and chooses instead to appease the fundamentalists.
Islamists want to shut down all channels of free expression, intellectual creativity and cultural diversity to preserve their form of Islam only. But we have seen the price of siding with religious fundamentalists throughout history, how U.S. arming of al Qaeda in Afghanistan backfired, and how turning a blind eye to the rise of ISIS in Iraq and Syria helped grow this monster that the whole world is now threatened by.
Bangladesh — the world’s eighth most populous country, with the fourth largest Muslim majority population — could very quickly become a breeding ground for Islamic terrorists, despite its long history of secular tradition. Remember, there is poverty, growing income inequality, the impact of global consumerism, a large segment of population without any secular education, constant political feuds and regular injections of extremist Wahhabi culture that extremists can exploit. All these factors could tilt Bangladesh toward Islamic fundamentalism if the Bangladeshi government and the secular community do not take immediate action against the growing trend of Islamic militancy.
Rafida Bonya Ahmed is a humanist activist, author and a marketing professional. She is the widow of Bangladeshi blogger and activist Avijit Roy.
(Collected from CNN)