For Hana Saleh, a nurse in the capital city of Sanaa, the 2011 peaceful revolution in Yemen was a turning point in her life. She spent months with other youth leaders and protesters, in what would come to be known as Change Square, calling for an end to the 33-year rule of President Ali Abdullah Saleh. In her hands, Hana carried a camera and with it she recorded the dreams of the Yemeni people. In 2013, she produced “Sparrows’ Revolution”, a documentary about the peaceful revolution. She is now the Executive Manager of Belqees Media and Belqees TV. It is an independent broadcaster reporting exclusively on Yemeni news. She is also a member of Women For Yemen, a network demanding that Yemeni women have a seat at the peace table.

Tell me about your experience of the peaceful revolution and your time in Change Square.

During the peaceful revolution, I was doing three things: I was in Change Square protesting and demanding change; because I was a nurse, I was providing first aid to the protesters; and I was always carrying my camera recording what was happening. It was with those tapes that I produced my first documentary. It was a documentary about brightness. It was about the dream of the Yemeni youth that participated in the revolution.

So from carrying your camera in Change Square, how did Belqees Media come to be? How did you go about setting up a Yemeni TV Channel?

Nobel peace laureate, Tawakkol Karman, called me in Yemen and told me to come to Istanbul. When I got there, she took me to a building and said that in that building we were going to start a Yemeni TV Channel.

But that wasn’t the beginning. When we first started to talk about having a TV channel, it was in Change Square during the protests. We said that we needed a TV station that would talk about the peaceful revolution. We were dreaming of a modern Yemen, but this was not reflected in the media. There was not one TV channel that was talking about what we wanted. All the channels, at that time, belonged to the political parties and they only broadcast their point of view. They were not broadcasting our call for in the peaceful revolution. So, we dreamed about this channel a long time ago.

Then in 2014, we set it up. And we decided to base it in Istanbul. When I got to Istanbul and I saw the building, I started to cry. I was crying because the dream we had in Change Square was coming true. 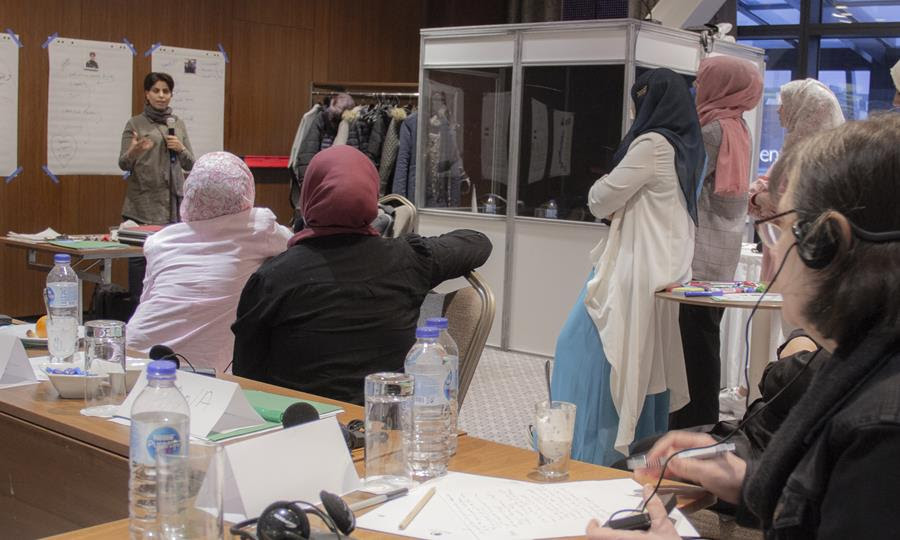 Why was it important for you to start a channel that had, exclusively, a Yemeni voice?

Many Yemenis could not believe that there could be a channel only about Yemenis – that cared about the regular Yemeni people. They didn’t believe it, because they had never before experienced this. But even my best dreams, I, also, could not believe that we would create a channel that would be the first provider of Yemeni news—and that it would be a channel that is independent. We are not supporting any side of the Yemeni conflict. Not because we want to be in the middle. No, it is because we want to stand with the Yemeni people. Where they are, we are with them. And because of this, Yemenis now believe the news from Belqees.

You have made sure that women are in leadership positions in your newsroom, why?

Sometimes I imagine a Belqees Media without women, where women are not leaders, and I think it would be like the other Yemeni channels. We have women because it is women who are the peacemakers. Belqees Media has a female culture, which is a peacemaking culture. We care about Yemen. So, we empower Yemeni women. And they empower Yemen. But Yemeni women have always called for peace—since 2011 they have worked to encourage peace. And it is women that know what the situation is like for children, with poverty and with hunger. They know what is happening to Yemen. Women in Yemen are strong. They are leaders. Even if in the media, they are shown covered and in black robes—inside the black clothes, those women are heroes.

You started your work life as a nurse and then transitioned to working as a journalist. What happened that made you decide to make that transition?

My time as a nurse was one of the best experiences of my life. I worked in the intensive care unit and I saw people dying from simple things. They were dying from hunger and poverty. I had to write about it because from one story, I could show many what was happening in Yemen. I could show why people were dying—why children were dying. I could not accept that millions of people were dying. So, I was not afraid. I had a camera and I could write. I had to record what was happening.