Forcing someone to remove their hijab, and forcing someone to wear hijab- both are equally offensive. It is quite clear, the oppression is always of women. Countries make laws according to their convenience, to be more clear, according to their men’s convenience. But the entire concentration of this misogynist mentality is on “how does a woman dress up and behave”. It doesn’t even matter if a woman feels comfortable or not, but to put more and more obstacles to her leading a normal life is the duty of this society. The fanatics of Karnataka are forcing women to remove their hijab, as the fanatics of Iran forced women to wear hijab. That’s not the only thing, the religious speakers of our country are always talking about how a woman should behave, how she should dress up, how she should lead her life and many more. All these religious supreme male leaders, if all of them get stuck on the point where a woman’s attire and behaviour matters more than every other vital issue, why should they be the authority then? Let the people lead the society who cares about every vital issue more than how a woman leads her life.

I saw a few people who are supporting the girls of India in the Karnataka incident, they are protesting for their rights, criticizing for the violation of women’s rights. None of them said anything when the rights of Afghan or Iranian women were violated when they were being forced to wear hijab. Despite these men laughed about the situation, and joked about being feminist and asking for their basic rights. These people don’t care about those girls of Karnataka or anyone, they only care about the facilities they are getting for being a man, for being the majority. They use the name of their religion to get away with anything and use religion to celebrate male chauvinism.

If the topic of culture arises, it must be mentioned that culture is developed in different areas depending on the weather and the available elements. Let’s say, for example, the heat of the sun in the Middle East is extreme, which can cause skin cancer. Thus, people need to cover their entire skin to save it from extreme sun exposure. As the women wear burqas to cover up their skin, the men also wear thobe or Jubba there. Again if we talk about the Eskimos, they wear furry, thick clothes to cover up their skin entirely. In extremely low temperatures, the skin cells get damaged and cause frostbite. So, skin must be protected from exposure to this cool temperature. Hence, different countries or regions have different traditions and costumes. Except for these few environmental effects, clothing has no race or religion. What a person prefers to wear is completely her/his personal interest. Saying “traditions will be hindered” is not a smart thing to say, because tradition or culture is not so easy to debilitate. Traditions are also man-made. It would not be hindered if someone wears Saree today and jeans tomorrow. Traditions and culture would be just as fine. Bragging the topic of traditions and religion is absurd as dressing up is completely a personal preference. It’s a personal preference if a woman would wear a burqa or if she would wear shorts.

Opposing women in everything for the sake of religion is only the result of male chauvinism. I’m seeing a lot of ‘pious’ men in our country today, who are protesting against the incident in Karnataka. They insist the hijab is a women’s right, women should be allowed to do so according to their rights. These same people did not say a word when the women of Iran were being forced to wear hijab. Wasn’t their rights violated then? Are women supposed to get their rights only when these men authorize them? In every country, the majority fixes the law according to their advantages, their beliefs. Every other belief and principle except theirs can never be right, leaving out them, everyone is a sinner!

I’m not saying any of these against men, I’m saying it all against patriarchy. The people of our society do not understand the difference between man and patriarchy. They think saying anything against patriarchy is the same as saying something against men. This misogynist mindset causes difficulties for men too, men also have restrictions on clothing. If a man wears a ‘girly dress’, it is very shameful for him! A man must never wear anything that seems feminine, not even the colour pink! A feminine attire makes them less of a man! What a shame it is! Does it mean, masculinity is so fragile, that a piece of cloth or colour can destroy it in a moment? “Being a woman is a matter of disgrace! A man should not do women’s work or wear women’s clothes, it will ruin his reputation, his masculinity!” That is why even a man has restrictions on the dressing. In the end, the guilt and shame will always belong to women.

The article was originally written in Bengali and published on Women Chapter’s main site. 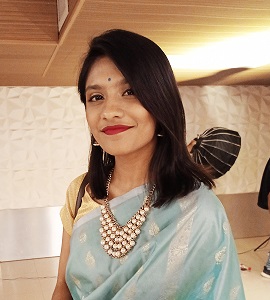 I am Purnasha Aurora. I recently finished college and now looking forward to starting my undergraduate studies. I studied in Nalonda High School and later in Daffodil International College. Being a student of Nalonda, I have always been into creative writings. I’ve always been into music, films, crafting and every other creative stuff.  I like to write about stuff that affects me or makes me wonder. Back in school, we used to discuss and write about the contemporary issues of the world all the time.  As we had the freedom to talk about anything that comes to our minds, I could explore the world inside my mind in my own way. As I’m growing to see more of this world, the discrimination and the ignorance among people affect me a lot. So I try to bring up my thoughts on my writing that others can relate to. I hope that my words will make people wonder a little more, make them a bit kinder towards others, and make the world a bit better than it is now.