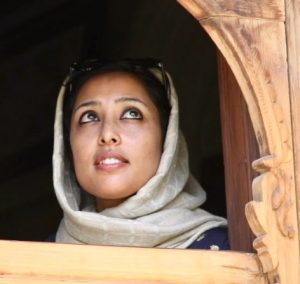 Purple Hibiscus is a remarkable story about a 15-year-old girl Kambili who lives with her violent Catholic father, and a patriarch, Eugene, a submissive mother Beatrice, and her younger brother Jaja. Written in a powerful first-person narration, the story moves back and forth between past and present and revolves around Kambili’s life and the major events that change her understanding of life. The events take place in Enugu, where she lives in a fear of her utterly religious father (“Papa,” the one who she tries to please all the time) and in Nsukka, where, after spending time with her aunt Ifeoma and her children, she learns to come out of her confined self, break free, and to question her beliefs learned from her father. Her father is an enigmatic character; he is a man of influence, both outside and at home, however, at home, he makes his family members live by his orders and rules, many times using violence as a means to control. There are many instances that show how scared Kambili is of her father. But at the same time, she keeps expressing her pride in being the daughter of her “papa” who is known and adored by many outside the home.

From the initial pages of the book, Adichie shows us how Eugene is not able to handle his anxiety and anger. The book begins by him breaking the figurines, denoting—to the readers—­­that his violence is later going to make an impact on his family members. His two extremes, working for the goodwill of people and being restrictive for his family members reflect a man born out of a patriarch mindset, whose violence is intensified after the upsurge in political tensions. He beats his son, breaks the rib of Kambili, and injures his wife by hitting her with the chair before finally getting killed by poison. 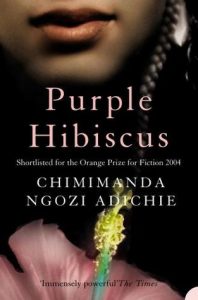 The book is important in many ways. It, despite being fiction, brings about the everyday reality of many people living under the roof of patriarchy in Nigeria. The story flows powerfully and the development of characters, particularly Kambili and Jaja, shows the growth someone can have an encounter with the other self that does not want to bind itself to restriction. In this sense, the purple hibiscus flower is used as a symbol of a shifting phase, rebellion, and a new birth for both Kambili and Jaja. Purple Hibiscus has a brilliant composition of sentences that portrays satirical common reality, an excellent portrayal of characters that anyone from any part of the world would relate to. Her witty sense of humor and simple language keeps the reader in the grip.

Unlike Adichie’s other novels (Americana and Half of a Yellow Sun), this book mainly touches upon the ideas of patriarchy, religion, rebellion, and freedom of self, however, it does not mean that the other books remain untouched by feministic ideas. Even though the broader theme of these books differ from each other—Half of a Yellow Sun is about a violent political history of “Nigeria” that killed and displaced a large number of people and Americanah focuses on race—they are somehow connected to few important things, first, through her feminist characters (Olanna and her twin Kainene in Half of the Yellow Sun, Ifemelu in Americanah, and Ifeoma and Amaka [who influence Kambili] in Purple Hibiscus). All of her writing is well-informed of the feminist ideas that make her readers think. Second, her sense of “belonging,” identity, and the traces and impacts of the Civil War in Nigeria can be seen in each of her books. And third, in all of these, she talks about different ways of culture and opinions prevalent in Nigeria: different kinds of clothes (eg. the one that is wrapped), presence of different communities and languages(eg. Igbo, Hausa, Yoruba, English, etc.), hair texture and styles (eg. the thick kinky hair, braided hair, etc.) and color (eg. cinnamon or hazelnut being a preference, etc.).

Adichie is one of the most powerful writers of our time and reading her books is like taking a wonderful journey to a new place where we would see, learn and live a different part of the culture. Purple Hibiscus is an addition to it.

Rashmi Sheila is a freelance writer and program manager at Afghanistan Centre at Kabul University (ACKU), Afghanistan. Prior to this, she has worked as a Counselor at SHF, Gurgaon, India and as an Editorial Assistant at the Studies in Nepali History and Society journal, Kathmandu. She has conducted research on women’s issues, Nepali migrants and diaspora, and gangsterism. Her writing has appeared in various blogs, magazines, and journals.