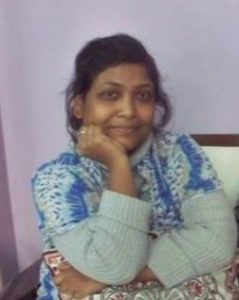 We were raised as Hindus. But when we were little, my sister and I used to get new dresses, hand-stitched by my grandmother, on both the Eids – Eid al-Fitr and Eid al-Adha. Eid al-Fitr means ‘festival of the breaking of the fast’ and it is celebrated at the end of Ramadan, a month when many adult Muslims fast. Eid al-Adha – which means ‘feast of the sacrifice’ – is celebrated just about three months later, at the same time when many Muslims perform their holy Hajj pilgrimage to the Kaaba Sharif. My friends and I celebrated with one another, our bright, new dresses blending into a crowd of color. Eid and Pujas were a time where Muslims and Hindus celebrated, dressed up in their very best.

My mom’s friend Joan auntie gave us two beautiful fragrant soaps from England. In our childhood spent in Bangladesh, those were a treasure to cherish. So, we stashed the soaps away for the whole year and only took them out on special occasions. We used to take a few sniffs at those soaps, admire the ornate plastic soap-box adorned with golden leaves; and on every Eid, very early in the morning my sister Shyama and I used to take bath with those fragrant soaps. Then, just when the Eid’s special prayer – the namaj – was done, we used to go out to all my Muslim friends’ houses to have Eid’s special shemai– the sweet vermicelli pudding soaked with plump raisins, almonds, and pistachios. I can still taste the special food to celebrate Eid –  pulao, roast, korma, rejala, shami kabab, and jorda made with saffron and orange slices on the tip of my tongue. Some fragrances never fade!

Growing up, I went to many places with my Muslim friends. I went to Arabic classes with them, as I was always ever inquisitive. I memorized the verses ayat of Surah Ar-Rahman, ‘fabi ayyi alai rabbikuma tukazziban’ and Tasbi E Yunus , ‘la ilaha illa anta subhanaka inni kuntu minaz zalimeen.’ I learnt to read the cursive Arabic alphabets written from right to left, ‘alif, beh, teh, theh, jim…’ I took comfort as a five-year-old little girl that all my languages started with similar-sounding alphabets. ‘A’ for English, ‘O’ for Bengali, and ‘Alif’ for Arabic. Life is calligraphy.

My grandfather’s Muslim friends used to often visit our house. My grandfather always had a ‘jaynamaj’ – the prayer mat- for his Muslim friends. I remember him telling us, ‘This is the best buy of my life.’ Practicing Muslims pray five times a day. Ajan from the mosques calls them for their prayer – the namaj. My grandfather’s colleagues were not atheists and agnostics like us. So, when they used to visit us, after hearing the maghrib’s ajan around 6:30 pm in the afternoon, we used to set up the ‘jaynamaj’ – the prayer mat – facing West, where Muslim’s holy shrine the Kaaba Sharif of Mecca is.

My family tried to respect the traditions of our Muslim friends, and they did the same. Non-vegetarian Hindus do not eat beef as they worship the holy cow. Muslims sacrifice cows and goats for the Kurbani Eid- the Eid al-Adha. Then they share that meat with their friends, neighbors, and the less fortunate. While growing up, all my Muslim friends always used to send the kurbani meat to our house – their Hindu neighbor. But nobody ever sent beef to our house, even by mistake. Whenever we were invited to my Muslim friend’s houses for any kind of party, they always used separate pots and spatulas to cook beef, and goat-meat. Sometimes, I feel as if ‘touch’ is the underlying word in any religion – touching meat, touching hearts, or out of touch.

I spent all my childhood years this way, amongst my beloved Muslim friends. So, today when I hear the words religion, antireligion, communalism, sectarianism, I really cannot write anything; to me, they are all the pieces of a complex jigsaw puzzle. All these memories keep playing in front of me like reels of a motion picture film. My eyes become misty; my writing quill just sits there untouched; I cannot dip it into ink. Is life a calligraphy?

Kalyani Rama is a Bangladesh-born Bilingual author. She has seven published books in Bengali. Kalyani has written for the newspaper ‘The Wisconsin State Journal’, and other literary magazines. Kalyani loves listening to people, animals, and trees.