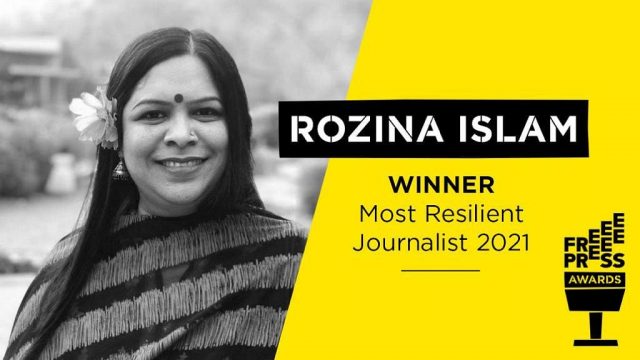 The Free Press Awards recognizes journalists and media professionals who have a strong commitment to press freedom and independent information. During a festive ceremony on 2 November 2021 in the Hague, the winners of the Newcomer of the Year and Most Resilient Journalist Award were announced.

The jury unanimously decided to grant this year’s Most Resilient Journalist Award to Rozina Islam from Bangladesh. As an investigative journalist working for the largest daily newspaper in Bangladesh, ‘The daily Prothom-Alo’, she has uncovered wrongdoings in her country’s health spending and is now facing trial and tribulation in her country.

Rozina Islam was arrested in May 2021 on allegations of stealing official documents and espionage after reporting on alleged corruption and mismanagement in the government’s response to the pandemic. Though she was released on bail, her passport and press card is ceased by police, and if convicted she could face up to 14 years in prison.

The jury says: “We express solidarity with the fight of journalists to uncover malpractices during this problematic time of the pandemic and calls on the government of Bangladesh to stop its harassment of Rozina Islam.”

Because of her great courage and perseverance, the jury decided to award Rozina Islam the Free Press Award for Most Resilient Journalist, with the corresponding cash prize of 7,500 euros.

Team Women Chapter expresses heartiest congratulations to Rozina Islam for the recognition that is well-deserved due to her courage, perseverance, and commitment to journalism throughout her career.