Happy, spontaneous, hilarious women never are liked by patriarchy, nor will they ever be.

Human beings that are victims of male-dominance, want women to always be worried, always suffer from guilt, always anxious. And this worry, guilt, anxiety will happen because of a patriarchal person.  It is important to clarify that a patriarchal person does not necessarily have to be a man. Like men, many women can also cherish patriarchal mentality, instead of being a male many men do not fall prey to it.

Women’s laughter, humming song absently, untied hair flying in the sky- all these are prohibited in a patriarchal society. The biggest proof that anyone can be a victim of patriarchy is, religious father gets annoyed when he hears his teenaged girl laughs loudly from side room, or when a young girl starts singing while watching the rain and neighborhood aunties pay extra attention to that and complains to her mother or a mother-in-law gets angry by seeing her son’s newlywed wife coming back from the office with untied hair and taunt her for that.

Notice that, here the near and dear ones, including women are behaving like a patriarchal person. But why are they doing this? Because they themselves are the victims of patriarchy. These rules who have been for thousands of years are created by men, managed by men, and cherished by both men and women. Now, these have become the normal rules and regulations.

So when a woman flies in the face of all these rules and regulations and scowling and laughs with all her happiness, she becomes an attention-seeking witch. When women sing songs with all their heart poured into the music, they are silenced for the sake of being restrained. When a woman flies in the spring air with untied hair, she is being covered for the sake of religious norms and veiling.

All these are done to diminish women’s spontaneity. Some do it knowingly, some unknowingly. Those who do it knowing has done this in the fear of religion, in the fear of “what will people say” and for having the mentality of “we have abided by all these things, why won’t she?”

And those who do it knowingly, Stay away hundreds of hands from them. Firstly they are afraid of women, afraid of the ability to give birth to new women, in order to hide the fear they want women to feel that she is under control. All the scriptures of the world are written by them. Where women are repeatedly told to be subject to men, slave, and property.

Secondly, they want women to always be in a sense of guilt. They want women to be believed that women are physically weaker than men, women are meant to be in the house and men are in the outdoors. For these reasons,  women lost their desire to work and gain financial independence. As a result, they have to ask for all their needs and then they suffer from guilt and shame like a slave. And as they become dependent financially, they always have to stay frightened and keep others happy, whether it is the father-brother-husband or mother-sister-mother in law. The ones who confine them in the house by not letting them work outside, they have to say “yes sir” to them. However, if there is any mistake in saying “yes sir”, they need to be frightened.

But from now we’ve become clever. Now how much you will scowl, we will laugh louder, we will sing louder at 3 AM and when we desire, we will travel the whole city unnecessarily with untied hair. And when we apply oil in our hair, we will veil ourselves like a religious person.

Link to the original article in Bengali: https://womenchapter.com/views/31051 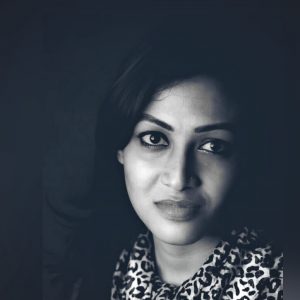 Naimah Tanzim is a social enthusiast. She lives in Dhaka and likes to highlight the daily misery of a messy, busy urban life through her writing. She loves reading and spending time with children. She is involved with several social programs, such as teaching underprivileged children, donating blood and contributing to environmental issues.